A 26-year-old drug dealer from Stafford tried to evade the police. He did so by driving his BMW into a policewoman who tried to stop him.

"This was a selfish act, by a selfish person, thinking of only themselves."

Drug dealer Gurajdeep Malhi, aged 26, of Stafford, was jailed for 12 years and nine months on September 2, 2019, for driving into a policewoman in a getaway attempt.

His BMW smashed into PC Claire Bond as she tried to grab the keys and arrest him over fears he could drive into Stafford 10k runners.

Stafford Crown Court heard that officers received reports that a BMW had crashed into garages at the back of Corporation Street, Stafford on September 23, 2018.

Several roads were closed due to the Stafford 10k race and Malhi drove off when challenged by PC Bond and PC Mullins.

Malhi reached speeds of 60mph over speed bumps and around bends.

He collided with a white van and a car and drove over paths and gardens, narrowly avoiding an elderly man. Race stewards had jumped out of the way.

Malhi was blocked by a van and cars parked on both sides in Blakiston Street.

As he tried to escape, PC Bond told him to stop and tried to get the key. As Malhi was heading in the direction of the runners, the two officers felt they had to stop him from hitting the runners.

Malhi then swung out, trapping PC Bond between his car and a fence. She was then dragged and thrown to the floor.

He then drove forward and again reversed at PC Bond, who was pulled out of the way by PC Mullins.

Malhi then sped off, hitting four more cars before fleeing on foot and getting into a Range Rover driven by his accomplice Lucy Bullmore. 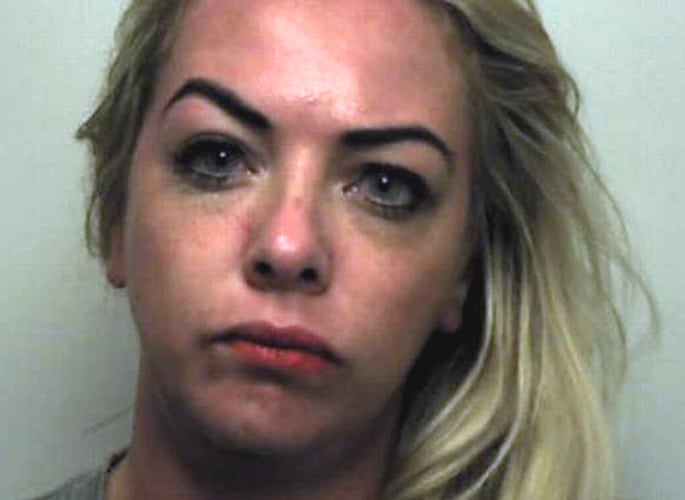 After another pursuit, the pair were arrested in the Highfields area and Malhi was found with cocaine.

PC Bond’s left leg was broken into two places, while her right knee was also fractured. One of her feet was so badly damaged at one point medics feared it would have to be amputated.

Since the incident, she has not been able to work.

PC Bond said: “The whole incident has left me not only physically scarred but also emotionally.

“My legs will never be the same again and I am currently unaware if I will be able to walk, run or ski correctly, let alone return to front line duties within the police force.

“I’m angry that he’s put me in this position but more importantly I’m sad that the impact it has had on my whole family is huge, not only now but for my future also.

“I’m determined to return to work, but also to walk unaided, look after my family and be as I was prior to the incident, but whether that is my focus rather than a reality remains to be seen.

“This was a selfish act, by a selfish person, thinking of only themselves. I can only hope that lessons are learnt and this never happens to anyone ever again.”

He also admitted to dangerous driving, driving while disqualified, driving without insurance, failing to stop and possession with intent to supply cocaine.

Stoke Sentinel reported that Gurajdeep Malhi was sentenced to a total of 12 years and nine months in prison.

Lucy Bullmore, aged 31, of Stafford, pleaded guilty to driving dangerously, failing to provide a breath specimen and failing to stop. She was jailed for two years.

“This case is a more extreme example and I am glad Malhi has been sentenced for his reckless and cowardly actions.”

“The impact on Claire physically and emotionally is clear to see and I pay tribute today to her professionalism,  courage and determination on the morning she was attacked and in her approach to returning to full health – both for her family and to allow her to return to the job that she loves.

“I look forward to seeing her back at work doing what she does best, serving the public of Staffordshire.”

Dhiren is a journalism graduate with a passion for gaming, watching films and sports. He also enjoys cooking from time to time. His motto is to “Live life one day at a time.”
Angry Indian Housekeeper helps Kidnap Employer in Fridge
Indian Policeman kills Three Sons after Argument with Wife