Tendulkar becomes the undisputed emperor of cricket as he reaches his 39th century milestone in Mohali, India.

Sachin Tendulkar has now passed Brian Lara’s Test aggregate of 11,953 runs, which makes Tendulkar the highest scorer in One Day Internationals (16,361) as well as in Test Cricket.

Tendulkar has been named the undisputed emperor among batsmen for his 39 centuries in Test Cricket and 42 ODIs, securing him the world record for these as well.  He achieved this tremendous milestone against Australia in the second Test of the Border-Gavaskar Trophy in Mohali.

On the day, the first ball of the post-tea session was by Peter Siddle. He delivered a full-pitched ball just outside the off-stump. Stepping into it, Tendulkar glided it to the gap behind square on the off-side and therefore, surpassing Lara’s record. 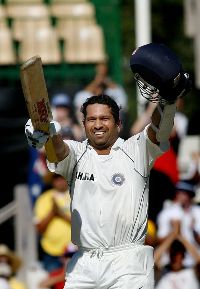 Tendulkar celebrated by taking off his helmet and looking upwards as if he was reciting a prayer. With his bat raised in the air, his fans gave him a huge ovation, followed by Ricky Ponting and his men coming to shake hands with him. Then, Sourav Ganguly came and gave him a well deserved pat.

Play was suspended for a few minutes as fireworks were lit around the Punjab Cricket Association Stadium, in a pre-Diwali celebration, highlightimg this special moment in the history of Indian cricket.

All Tendulkar needed was just 15 runs to overtake Brian Lara at the start of the match, Lara had been a long time rival during most of Tendulkar’s sporting career.

It was not long during the match when Tendulkar did finally break the record, and DESIblitz would like to congratulate him on this outstanding achievement and we hope he continues to go from one success to another.

Here is a video of this Sachin Tendulkar’s record breaking moment.

As part of the senior DESIblitz team, Indi is responsible for management and advertising. He especially loves producing stories with special video and photography features. His life motto is 'no pain, no gain...'
Football from India
Tata sponsors Ferrari F1