A Bollywood wedding is full of glamour, style and gorgeous actors. We look at pictures that capture Bollywood’s greatest celebrity weddings.

Bollywood celebrity couples are gorgeous, enigmatic and are the centre of attention for the media and their doting fans.

When these star studded couples choose to take their relationship to the next level, their weddings are no less than a Bollywood set.

With actresses setting trends with their bridal gowns, headpieces and makeup, the grooms equally make some poignant fashion statements.

DESIblitz takes a look at the candid pictures of some of our favourite celebrity Bollywood weddings, which capture the romance and extravagance of a magical Bollywood event. 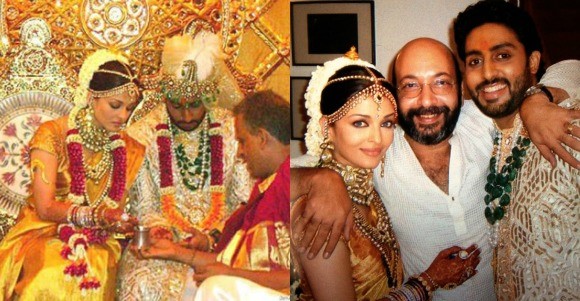 When the most beautiful woman in the world married into one of the most prolific families in Bollywood history, all eyes were on Aishwarya and Abhishek Bachchan.

Aishwarya looked breathtakingly beautiful in a traditionally yellow bridal outfit with her hair in an up do wrapped with beautiful white flowers.

Abhishek looked dashing as a groom wearing a traditional pagh and suit. 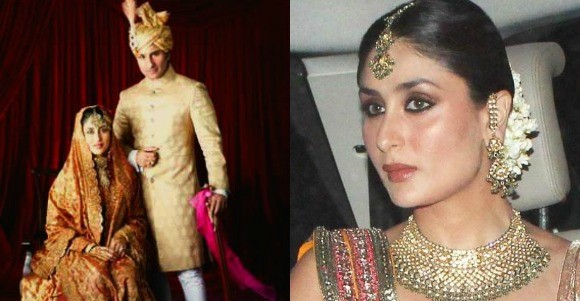 Bollywood diva Bebo and the Pataudi Nawab make for a stunning couple, and their marriage was the talk of the town in Bollywood!

Tying the knot on October 16, 2012, the pair took five years of courtship before getting married.

Saif’s impressive royal lineage and Kareena’s superstar status meant that their wedding was one not to be missed! 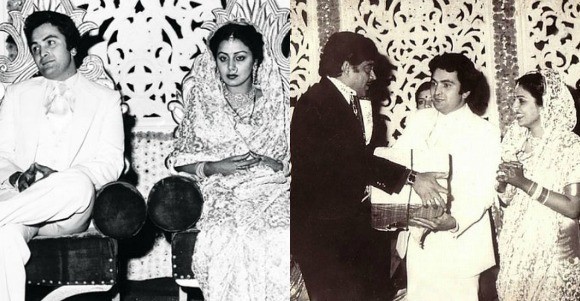 When yesteryear chocolate hero, Rishi Kapoor decided to marry his on screen heroine and off screen love interest Neetu Singh, an extravagant ceremony was to be expected.

With superstars including Shatrughan Sinha and Dharmendra attending the event, this lavish wedding attracted every A-list Bollywood celebrity.

With their marriage still going strong today, it has truly stood the test of time! 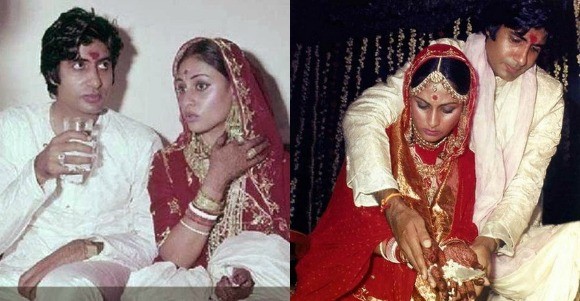 Amitabh Bachchan’s marriage has received as much attention as his illustrious career.

Marrying Jaya Bhaduri on June 3 1973, this eligible bachelor was off the market very early in his career.

These candid shots of the two on their wedding day capture some natural moments between the pair.

Though his apparent affairs with Rekha and Parveen Babi strained his relationship, this pair are still a married couple today. 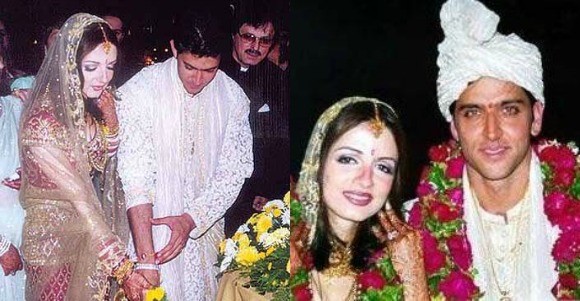 When Hrithik married his childhood sweetheart Suzanne, there was only happiness between the two love birds.

Their Bollywood wedding was extravagant but also full of romantic gestures between the two.

However, Hrithik’s rising fame brought trouble into their relationship.

His apparent affair with former Kites co-star Barbara Mori was one of many reasons which made Suzanna file for divorce in 2013. 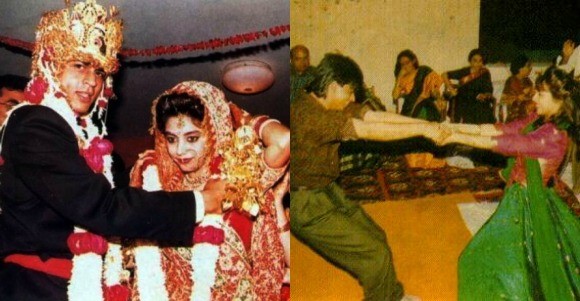 Bollywood’s most romantic hero had an equally dramatic off screen romance with his now wife!

The forbidden love between Hindu Gauri and Muslim Shahrukh prevented them from gaining family approval.

Gauri eventually left Shahrukh but he in true Bollywood fashion, he was determined to find her and followed her across India and proposed!

Tying the knot in a very small ceremony on October 25, 1991, this couple have defied the odds and are still happily married to this day. 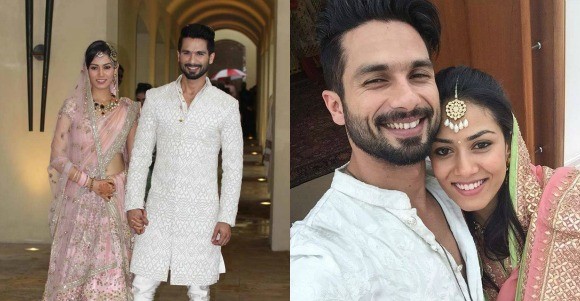 Shahid’s whirlwind romance with Mira Rajput shocked his fans. Challenging the norm, Shahid chose not to marry an actress or anybody in the entertainment industry.

However, Shahid proudly flaunted pictures of his new bride on his Bollywood wedding day in this cute selfie!

They both happily posed for photographs on their reception day and looked gorgeous together! 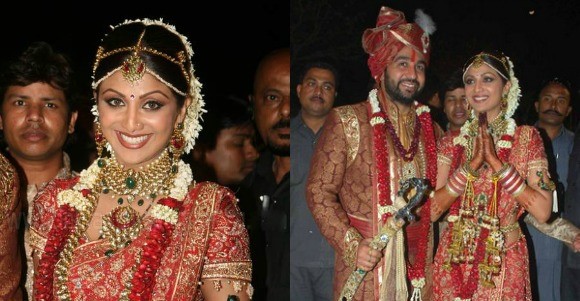 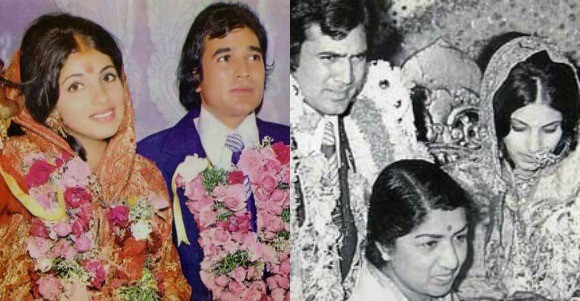 The marriage of India’s first superstar shocked the industry and broke a million girls’ hearts!

Already a movie star, his marriage to Dimple who was only at the tender age of fifteen attracted large speculation.

These rare pictures of the two show the young and cute Dimple as a bride with her dashing superstar husband Rajesh Khanna. 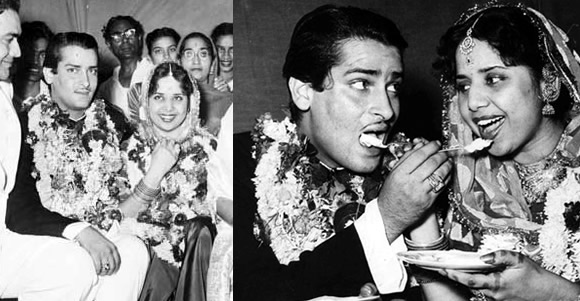 Shammi Kapoor was frequently symbolised as the ‘Elvis’ of Hindi cinema but this did not stop him falling in love with Geeta Bali on the sets of Rangeen Raaten in May 1955.

Subsequently, in August 1955, the couple married and went onto have two children. Sadly, Shammi only had ten years with his wife, as she passed away with smallpox in 1965. 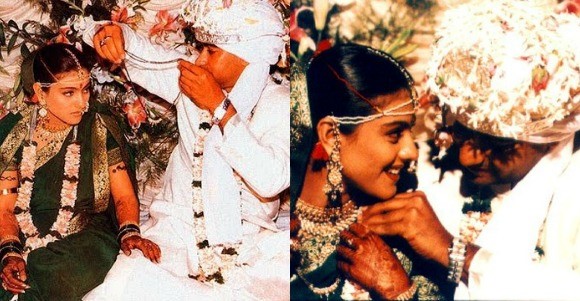 The unlikely pairing of outspoken Kajol and reserved Ajay Devgan is like no other in the industry.

After working together in numerous movies romance started to bloom and before long this couple made it official by announcing their intentions to marry on February 24 1999. 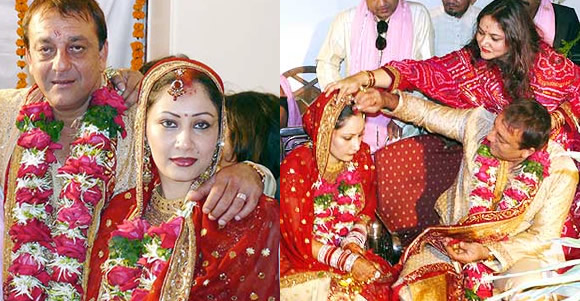 Sanjay Dutt married Manyata, who is 17 years younger than him in 2008, and they both happily showed that age is just a number when it comes to love and marriage.  Interestingly, the marriage did not meet the approval of Sanjay’s sisters.

These sweet Bollywood wedding photos capture the moments of the two on their wedding day looking deeply in love.

Kajol was glowing in the traditional Maharashtrian bridal attire and Ajay looked suave and confident in his simple but smart white suit.

Large and extravagant, or minimal and personal Bollywood celebrity weddings are magical in their own specific way.

Whilst some couples have gone their separate ways and others remain happily married, these Bollywood wedding shots capture the sincere love between the couples on their wedding day.

Momena is a Politics and International Relations student who loves music, reading and art. She enjoys travelling, spending time with her family and all things Bollywood! Her motto is: “Life is better when you're laughing.”
5 Bollywood Actresses Guys want to Marry
Desi American actor stars in The Jungle Book