The cast of Rock On 2, handsome Farhan Akhtar and lovely Shraddha Kapoor, entered the Bigg Boss house, to indulge in some fun and games with the contestants along with promoting their new movie.

Both, celebrities and Indiawale performed special Bigg Boss-related renditions for the guests. The lyrics of the renditions focused on the respective teams and their journeys so far in Bigg Boss 10.

The fun continued as Farhan asked Om Swami, to teach him the signature headbanging step, Om Swami is seen doing often in the house. While Shraddha Kapoor gave an opportunity to birthday girl Nitibha to sing ‘Sun Saathiya’ alongside her.

The entertainment time at the house reached its peak when Farhan and Shraddha engaged the contestants in a special task called ‘Tere Naam’ where they were asked to present a clapboard with a movie title on it to one of their fellow contestants. 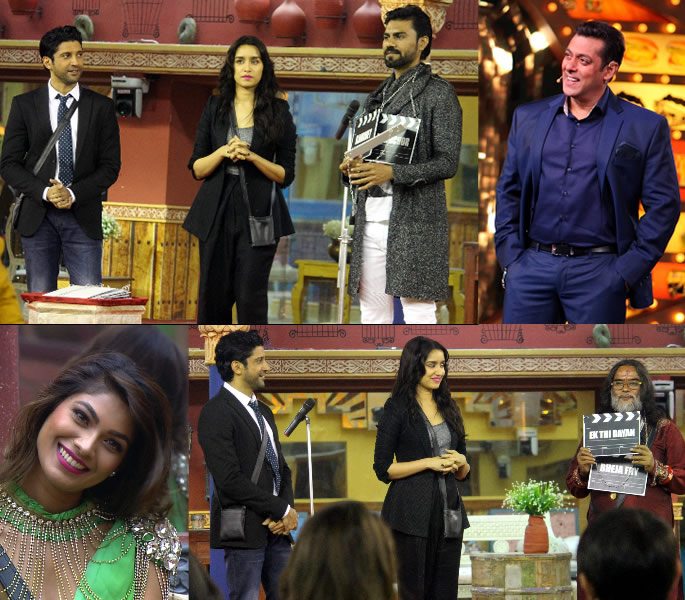 Prior to the Rock On 2 stars, Farhan and Shraddha’s entry into the Bigg Boss House, host of the show megastar Salman Khan held his customary interaction with the contestants where he first addressed a burning topic – Om Swami’s dressing style! asking him to wear regular clothes over his red and vermillion options to which Swami said that he will wear whatever clothes Salman Khan sends for him.

Salman complimented Lopamudra and Bani for their pretty outfits and they blushingly returned his compliment.

Pulling Om Swami’s leg once again, Salman Khan asked him to use his divya drishti and reveal which contestant would be evicted. And, Om Swami, as usual, failed to provide an adequate response.

Post all the fun and laughter, Salman asked the contestants to nominate the Khalnayak of the house for the week. While most of the celebrities pointed fingers at Om Swami, majority of them were convinced that it was in fact, Gaurav Chopra whose performance in the luxury budget task had to earn him the Khalnayak Kursi.

Salman questioned Gaurav about the nominations and his reason for nominating Bani. Salman went on to highlight that it seemed Gaurav’s strategy is to spend the remaining weeks with the ‘weaklings’ of the Bigg Boss house.

After all this masti one question still remains – Who will get evicted this week from the Bigg Boss house? We will be letting you know!

You can catch all the action and fun on the show that’s broadcasted daily at 9 pm on Colors TV UK.

Mariya is a cheerful person. She is very passionate about fashion and writing. She also enjoys listening to music and dancing. Her motto in life is, "Spread happiness."
Karthik’s Pitch wins Team Task in The Apprentice Week 5
Playboy Club opens in Mumbai attracting Bollywood Stars