Lucinda Nicholas looks set to become the true ‘Wild’ Card of Bigg Boss 11. Let’s glance through some of the contestant’s hottest looks.

With this sexy swimsuit, the model adds more glamour with her beautiful belly button piercing.

This year, Bigg Boss 11 has added an interesting, fun mix of contestants. But Lucinda Nicholas looks set to hail as the true ‘Wild’ Card of the series.

The reality show housemate entered as a ‘commoner’. However, her dazzling career shows us she’s anything but!

After starring in various films in Australia, she soon turned her sights to Bollywood. She has currently stayed in India for a year, building up her career amongst the country’s audience.

Most of all, she stands out for her incredibly hot looks, donning sexy bikinis and sizzling outfits. As she takes on Bigg Boss 11, let’s take a look at how Lucinda Nicholas is truly the ‘Wild’ Card for the reality show!

Dazzling under the Sun 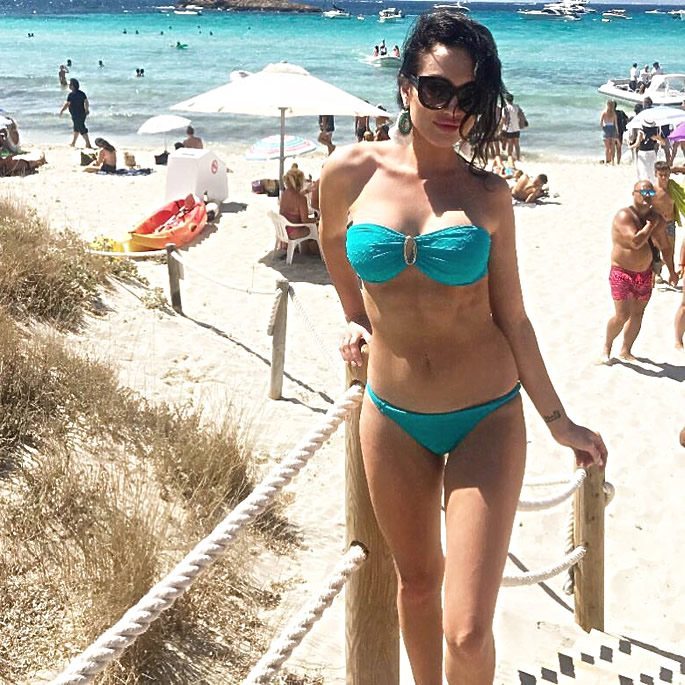 She wears a strapless, azure, two-piece bikini, tantalising fans with her voluptuous curves. Set against the backdrop of a clear ocean and sandy beach, Lucinda looks utterly stunning.

The model pins her hair up into an elegant bun, with a few locks cascading down her face. She also adds chandelier earrings to her look, donning very simple makeup. Allowing fans to instead gaze upon her amazing figure. 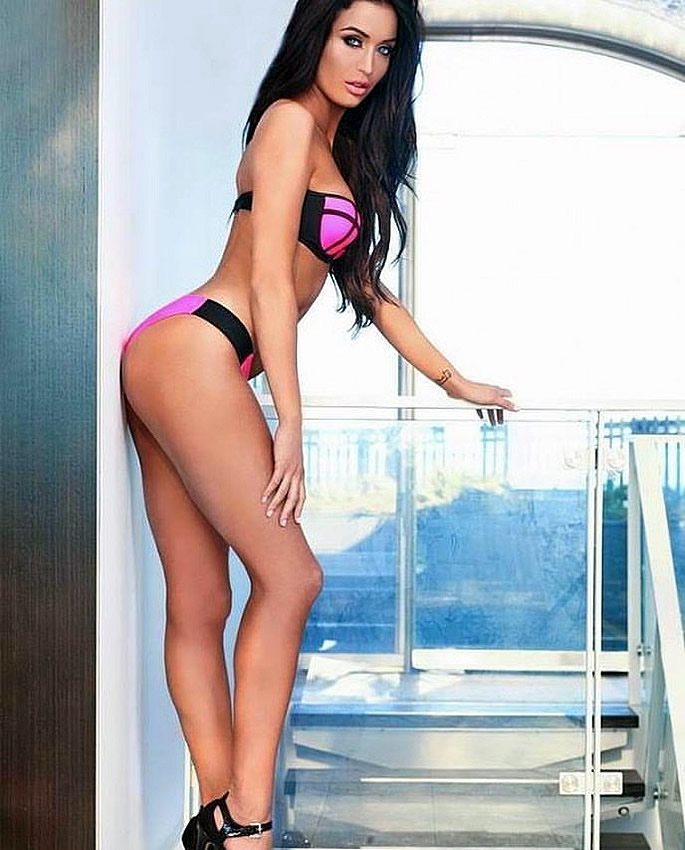 In this seductive photo shoot, Lucinda Nicholas leans against a wall while standing on a staircase. Arching her back, she strikes a cheeky, yet jaw-dropping pose.

She dons a sexy, two-piece bikini, containing hues of hot pink and black. The strapless creation looks superb on the Australian star as she gazes straight at the camera. Her gorgeous, chestnut tresses cascade down her shoulder, giving fans an excellent glimpse of her curves.

For makeup, she highlights her crystal blue eyes with plenty of black eyeliner. Lucinda also adds a creamy, pink lipstick to perfect her full pout. 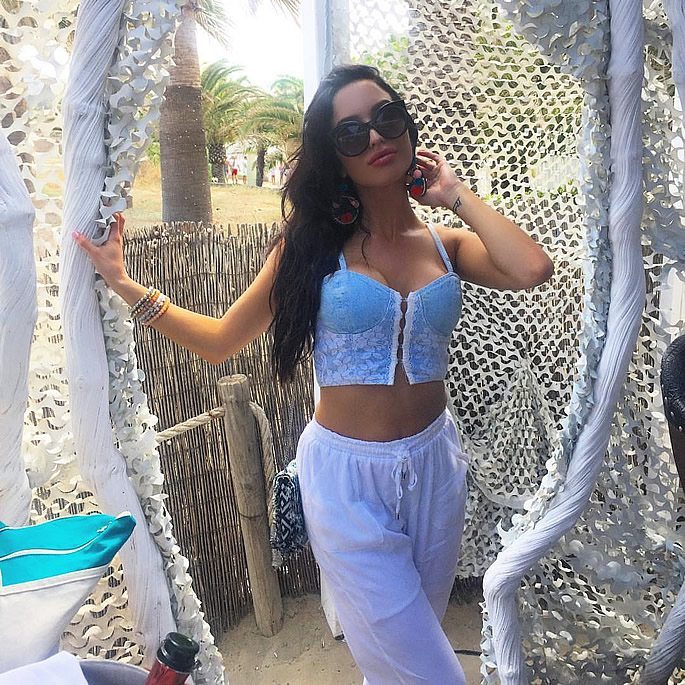 In this image, taken from the warm paradise of Ibiza, Lucinda shows us she doesn’t just need bikinis to create sexy looks. Ready to embrace the glorious weather, she matches a blue crop top with a pair of white trousers.

This outfit gives fans a glimpse of her slim torso, accentuating her beautiful curves. We particularly love the top’s floral embroidery, a popular fashion trend of 2017.

Lucinda adds a pair of black sunglasses, allowing us to focus on her dazzling jewellery. She wears chandelier earrings, containing fun, vibrant pom-poms, and shimmering bracelets. Sweeping her luscious hair to one side, Lucinda looks flawless on her fantastic holiday. 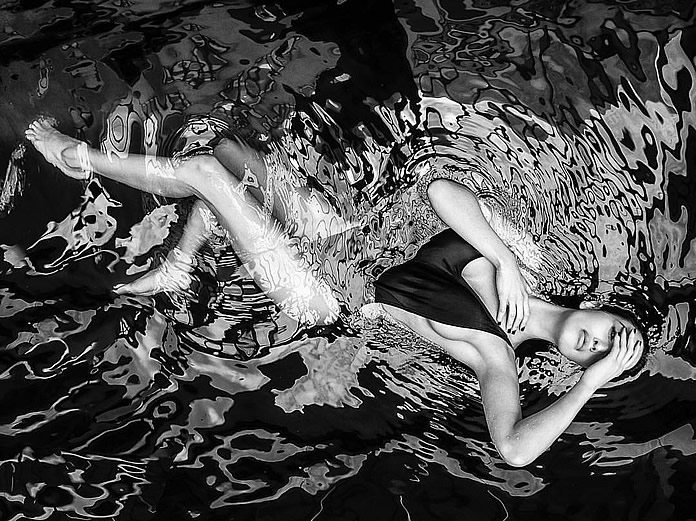 This superb photo shoot reveals the full elegance and beauty of Lucinda Nicholas. Swimming in a luxurious pool, she leans back to reveal her captivating pose.

The actress wears a revealing, halter-neck swimsuit. While the reflection created in the water prevents us from viewing Lucinda’s complete figure, we can still gaze upon her perfectly toned legs.

She wears black nail polish to match with her gorgeous monokini. Placing one hand on her chest, the other rests upon her forehead. With sultry eyes and a full lip, the model simply takes our breath away. What a delightful bikini look! 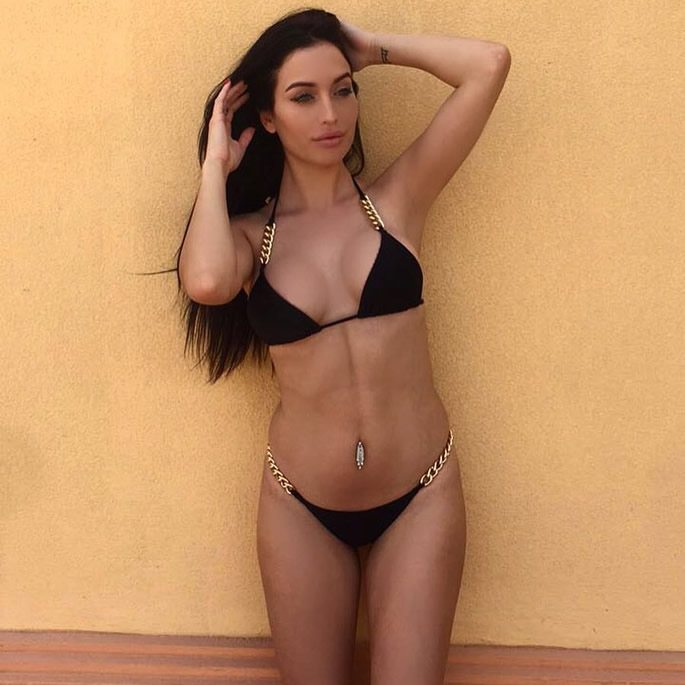 From making waves in the pool to brushing through her gorgeous locks. Lucinda opts for another seductive swimsuit; this time a black-and-gold creation. The black bikini contains gold chains as its straps, looking utterly fashionable on the starlet.

With this swimsuit, the model adds more glamour with her beautiful belly button piercing. Containing dazzling jewels, it easily becomes the stand-out feature of this look.

Lucinda keeps her hair loose, cascading down her back, making the bikini and piercing as the focus. With a nude lip and immaculate contouring, Lucinda appears as a phenomenal beach babe! 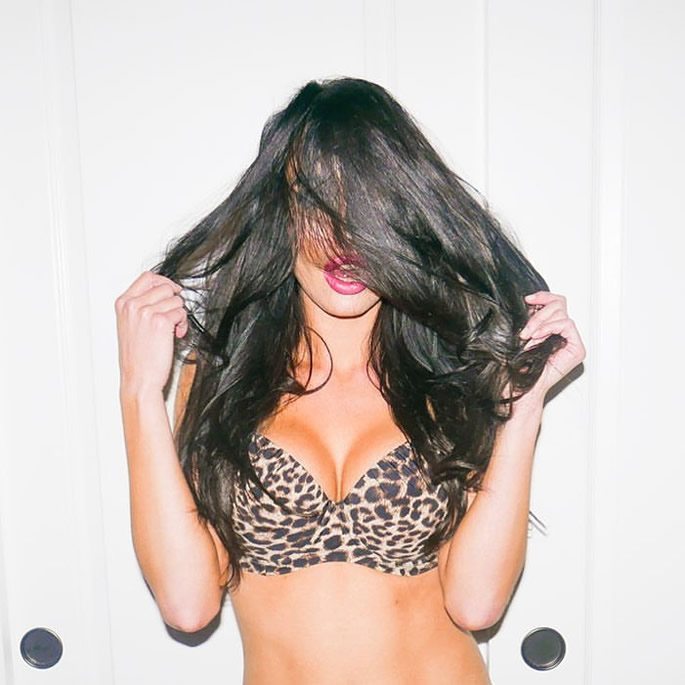 Lucinda cuts an unusual pose in this fun photo shoot. Showing she’s not afraid to stray from convention, the model hides her face away from the camera. Instead, she covers her beautiful looks with her raven tresses.

However, one can still glance upon her full, rosy lip. Delivering a perfect pout for the camera.

In this playful image, Lucinda keeps the focus on her racy lingerie. She wears a bold, leopard-print bra which tantalises fans of her ample chest. Along with her stunning figure, Lucinda sets pulses racing with this sexy lingerie look. 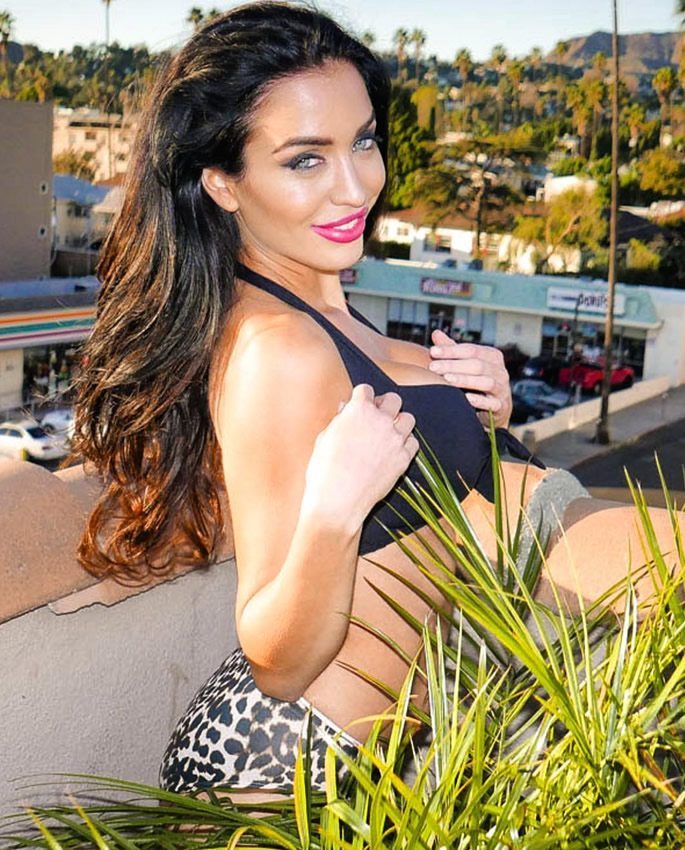 This final image captures the true magnificence of Lucinda Nicholas’ hot looks. With the backdrop of palm trees and warm weather, the model oozes glamour and sex appeal.

She matches a halter-neck, black bikini top with leopard-print briefs. Lucinda styles her hair into loose waves, with the Sun revealing the different tones in her hair. For makeup, she sizzles with a hot pink lip and dark eyeliner.

Beaming into the camera with a beautiful smile, the Australian model is simply irresistible!

With all these looks, this could give Bigg Boss fans a hint of what lies in store for the famous house. Perhaps they can expect an array of jaw-dropping bikini looks, seductive poses and unbelievable fashion style.

We can’t wait to see what antics Lucinda Nicholas will be up to in Bigg Boss 11. Judging by these gorgeous images, she truly is the ‘Wild’ Card of the series!

If you’re keen to see more of the show’s hot, new contestants, why not check Benafsha Soonawalla’s sexy looks too? Or spend some time glancing through Jasmin Walia’s stunning bikini looks?

Make sure you tune into Bigg Boss 11, available on Colours UK TV at 9pm.