Benny Dhaliwal tweets ‘I am out of danger and stable’

"I can say I am out of danger and stable."

Music artist Benny Dhaliwal has stated that he is now “out of danger and stable” in his latest Tweet.

The singer revealed that he woke up to numerous messages from fellow artists and fans.

Benny claimed that he was “out of danger” though he has not yet mentioned what happened.

“Just want to say waking up 10 days later to your messages and the prays of people and my family was heartwarming.

“I can say I am out of danger and stable.

“Well on the road to recovery with the Almighty’s blessing. @nhs #amazing OFFICIAL STATEMENT WILL BE SOON TO FOLLOW.”

Just want to say waking up 10 days later to your messages and the prays of people and my family was heart warming. I can say I am out of danger and stable. Well on the road to recovery with the Almightys blessing. @nhs #amazing OFFICIAL STATEMENT WILL BE SOON TO FOLLOW

It was alleged that he was the victim of a shooting. It was reported that the assailants turned up outside his home in Kent during the evening of February 9, 2020.

One of the assailants shot through a window, injuring Benny before they broke down the door and forced their way in.

The men allegedly warned the musician before leaving the house. The alleged victim, Benny Dhaliwal, was then taken to hospital where he remained in a serious condition.

It was alleged that he was shot at three times, twice in the leg.

It was reported that his family called for privacy during the crucial time.

Locals described the aftermath as chaotic as they saw helicopters and police cars arrive at the scene.

One resident said: “We didn’t know anything had happened until the lights started coming down the road.

“All hell broke loose. There were police cars, ambulances, a helicopter.

“We didn’t know what was going on. It was scary.

“The police have been quite tight-lipped – we just hope he’s ok.”

Police have urged those with information. Detective Chief Inspector Gavin Moss also requested anyone who saw a vehicle being driven “erratically” in Shore to come forward in order to aid police.

In his Tweet, Benny Dhaliwal stated that he was stable, possibly indicating that he was seriously injured. He also thanked the NHS for taking care of him in the hospital, calling them “amazing”.

The likes of H Dhami and Hunterz wished Benny a speedy recovery. 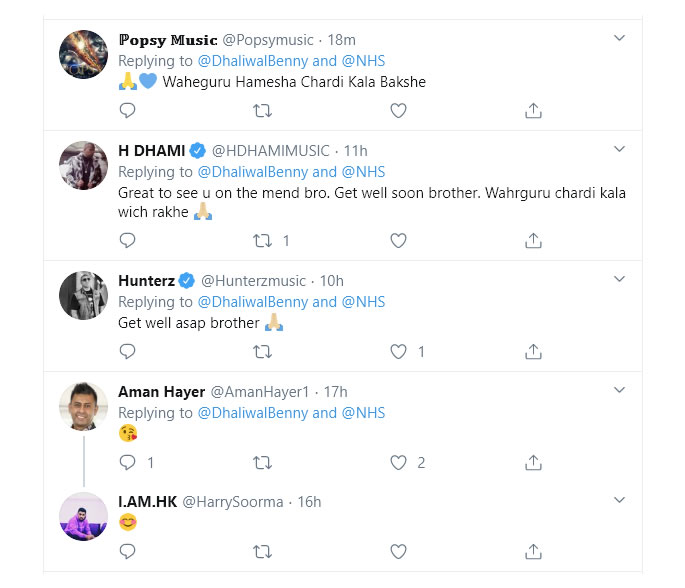 Others wrote: “Prayers and best wishes for a speedy recovery.”

Another posted: “Good to hear you are well my brother. Stay strong. God bless you.”

He also revealed that he will release an official statement soon. It is not known what the statement will be about but he may shed some light on the reason why he was in the hospital.

Dhiren is a journalism graduate with a passion for gaming, watching films and sports. He also enjoys cooking from time to time. His motto is to “Live life one day at a time.”
D’Stil talks ‘Bag Down’, Music Industry and Ambitions
Jay Sean & Guru Randhawa collaborate on ‘Surma Surma’