Pakistani actress and model, Humaima Malick, has featured in the August edition of Vogue UK, and looks absolutely stunning!

In this latest issue, Humaima channels her inner diva as she poses against the backdrop of the iconic British land feature, the Big Ben.

As the August 2015 edition is all about how to transition from summer to autumn/winter, her outfit choice and colour pallette were exquisitely chosen.

The shot sees the star draped in a gorgeous Syeda Amera white dress, with stunning heavy embellishments on the chest and striking earrings and necklace to match. 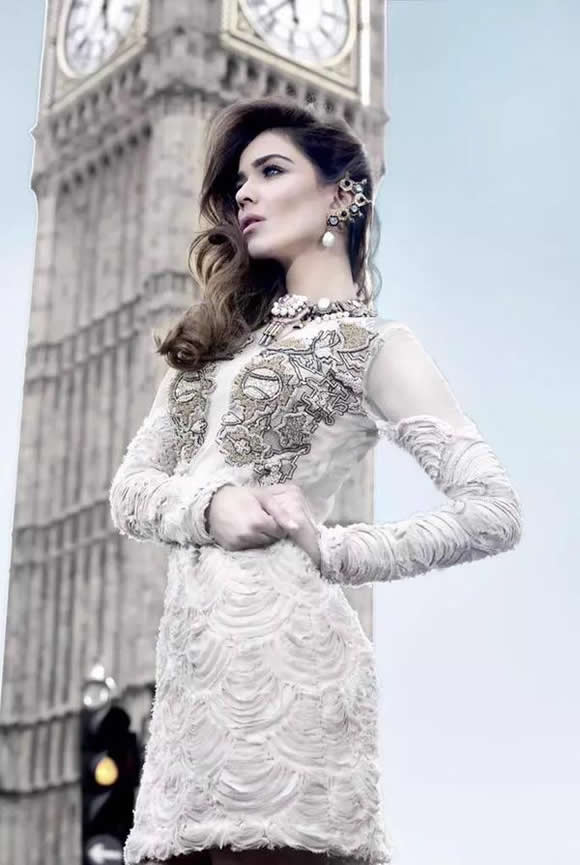 Humaima’s sweeping Hollywood-esque hairstyle pairs beautifully with her soft make-up, and is a perfect combination of both striking and sophisticated.

The 27-year-old beauty could not contain her excitement about her new endeavor, as she posted several pictures of her shoot on Instagram and Twitter with the caption: “Featured in August issue British Vogue.”

The photoshoot was an excellent celebration of Humaima for her work in the film and modelling industry.

But Humaima was not the only star to be acknowledged by Vogue for their hard work. In fact, the Raja Natwarlal (2014) actress modelled the Syeda Amera dress to pay homage to the Pakistani designer.

Syeda was honoured by Vogue UK for her work within the J Summer Fashion Show 2015.

The fashion mogul was also acclaimed for being the first Pakistani designer to represent her home country at Jessica Minh Anh’s 10th Catwalk at Gemasolar in Spain.

Both Syeda and Humaima are representing Pakistan in a fantastic way.

Syeda studied fashion in France and Bangkok, and designs for both her Western and Eastern clientele.

Aside from modelling, Humaima is busy promoting her up and coming film, Dekh Magar Pyaar Say (2015), which will hit the big screen from August 14, 2015.