Punjabi Singer, Anita Lerche is one in a million. Originally from Denmark, she has perfected Punjabi folk music to another level. DESIblitz catches up with her for some exclusive Gupshup.

"Music is a universal language that speaks directly to the heart."

If you heard the name Anita Lerche, it is unlikely a Punjabi singing, blonde-haired, blue-eyed beauty would automatically come to mind. Anita Lerche, is in fact a Caucasian singer, who although entirely Danish, has an outstanding command of the Punjabi language.

She is the first non-Asian woman from the West to sing and release a solo album in Punjabi. Since her first Punjabi album release, Heer from Denmark in 2006, Anita’s career has flown straight to the top, giving her the opportunity to tour and perform all over the world. 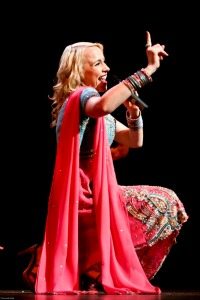 Her new album Sadke Punjab Ton is a direct reflection of Anita’s love and passion for Punjabi culture.

The track ‘Sammi’ from the new album brings a new aspect of Punjabi culture to life as she pays homage to the ladies who brought a rich layer to the culture through music and dance.

Anita’s amazing journey from Denmark to the Punjab is an interesting one. Anita grew up in a musical household, with her father playing the guitar and her great grandfather who was a professional singer and musician.

At the age of seven, she began singing publicly when she joined the Herlev School choir. Then, at the age of thirteen, she was accepted to the choir of Radio Denmark and was chosen to sing in an opera for children.

With her vocals improving more and more, two years later she started training in the western classical style and took her first professional job as a Church singer. Anita studied musical theatre and arts at Mountview Academy of Theatre in London, completing her degree in 2001.

DESIblitz had the pleasure of catching up with Denmark-born Anita Lerche in Birmingham for some exclusive Gupshup.

Anita’s love and passion for Punjabi music came from her first trip to India in the summer of 2005, where she visited the apple orchard of Mr. Anurag Sood in Kullu Valley, Himachal Pradesh. She was immediately mesmerised by Punjabi culture and music. Within just three months stay in Hoshiarpur with Mr. Sood and his family, Anita learned to sing in Punjabi and her first solo album soon became a reality:

“On the bus to Punjab, I was mesmerised by the driver’s Punjabi music. The music and the rhythms were so inspiring, I wanted to dance there and then in the bus. I felt that this was the music I had been looking for,” says Anita.

“While recording in the studio my talent was recognized and I was offered a recording contract. Since I had already fallen in love with Punjabi music, I decided to cancel my shows in Europe, put my career on hold and stay back in India to follow my heart.” 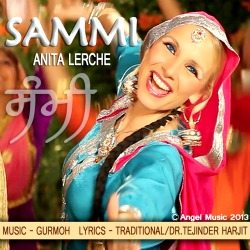 Since then, Punjab has become Anita’s second home, and she is continuously travelling all over the world performing and promoting the Punjabi language, culture and music.

Her deep passion is to spread happiness, unite different cultures through her singing and bring the East and West closer together through music.

What is remarkable about this versatile singer is her ability to sing in multiple languages. She has impressively sung in Punjabi, Danish, German, English, French, Italian, Chilean, Norwegian, Hindi, Himachali, Swedish and Latin.

Her Punjabi pronunciation is almost effortless and just goes to show the lengths and dedication this singer has gone to in perfecting her art:

“For me the voice is a very versatile instrument and is one of the reasons that I easily could learn to sing Punjabi songs, from a technical point of view. Pronouncing words in Punjabi was very challenging to begin with, even though I had already sung in 13 other languages.”

The global appreciation this singer has received is truly incredible. In 2006, the Times of India wrote: “Anita has also rendered traditional Heer in the album and succeeded in imbuing the depth, pain and passion of the rich composition.” 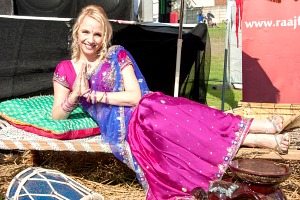 “In fact, going by her style and pronunciation, one would get the impression that she is a Punjabi only to discover that she is white,” they added.

Anita has received numerous awards over her career, including the 2007 Sita Mata Award, from New Dharmik Utsav Sabha (Jalandhar) for singing Hindi Bhajans, the 2009 Danish World Music Award for World Track Of The Year with ‘Maahiya’, the 2010 Pride of the Indians Award from the Indian Cultural Society Denmark, and the 2013 Global Punjabi Society Award for Conspicuous Singer, and many more.

Her song, ‘Sammi’, is recognised as a folk dance, which is picturised by the women of Punjab. It’s a dance performed in circles and calls for the ladies to be dressed in colourful lenghas.

Anita brings the whole scene to life in her new energetic music video. She dances vivaciously to the Punjabi drums, surrounded by swirling ladies. The clip projects a sense of nostalgia as Anita uses music as a medium to connect cultures: 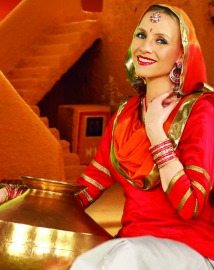 “Film director Harjit and lyricist Dr. Tejinder Harjit have guided me and taken me through the most beautiful and colourful journey of my life while creating ‘Sammi’,” admits Anita.

“Striking a cord inside my heart, it almost felt like I once upon a time could have been this Punjabi kuri myself. Together with the talented music director Gurmoh we have made ‘Sammi’ come to life with the notes from the past blended with the sound of today,” she says.

Fans and music industries around the world have shown great appreciation and support for Anita. This has helped boost her career giving her wider opportunities:

“Music is a universal language that speaks directly to the heart, so it can unite people from different cultures and eliminate existing borders,” Anita believes. And in her unique case, this is not far from the truth.

DESIblitz has a feeling that there is a lot more to look forward to from this unique Punjabi singer, who has only just embarked on the journey of her wonderful career.

Meera grew up surrounded with desi culture, music, and Bollywood. She’s a classical dancer and mehndi artist who loves everything connected with the Indian film and television industry and the British Asian scene. Her life motto is “do what makes you happy."
A R Rahman Launches Coffee Table Book
Priyanka Chopra is feeling Exotic