Satinder Sartaaj is a Punjabi singer who’s profound poems which are an infusion of Punjabi culture and Sufi Mysticism. DESIblitz met up with this much sought after rising star, for an exclusive interview.

"it's about becoming Sufi and being loyal to it, that is the bigger thing"

DESIblitz is honoured to shine its Spotlight on the rising star that is Satinder Sartaaj (also known as Satinder Sartaj with a single ‘a’ and Sartaaj alone).

An Indian born Punjabi singer and poet with an ever growing fan base originating from the Punjabi Diaspora and continuously evolving to audiences worldwide.

His songs predominantly consist of poems infused with Punjabi culture and Sufi mysticism. He is said to be ‘gifted with a mellifluous voice and a remarkable range in all octaves.’

Sartaaj was born and raised in Bajrawar, a sleepy village in the Hoshiarpur district of Punjab, to an ordinary family of farmers. He began performing at an early age on stage, which motivated him to pursue music.

As a child, he developed a taste for Punjabi tradition and Sufiana Qalaams (scriptures) though at the time they were not in his conceptual grasp. Always curious about the beauty of nature surrounding him, it inspired him vastly and was woven into his poetry/songs. He was also mesmerised by the sounds emanating from the Flute and Sarangi often heard by the ‘wondering folk’ and Sufi musicians. 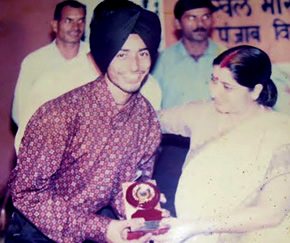 His educational career shows the dominance of the Sufiana music embedded in his mind and heart with his PhD in Specialisation of Sufi Music and later a doctorate in Sufi singing (gayan) from Punjab University:

Sartaaj attributes a lot of his success to his mentor Pankaj Mala Sharma. He also passed with distinction in ‘Persian’, the language of many Sufi Qalaams in the past and of the greats like Jalludin Rumi, and Shams Tabrezi from Iran: both whom he respected greatly.

It is said that Satinder adopted the surname Sartaaj (meaning supreme) as a pseudonym for being a writer during a sleepless night at university. He had penned a song with the last line ‘Tere Sir Taareyan Da Taj Ve’ which had inspired him to do so.

Before his rise to fame, Satinder Sartaaj participated in and won many musical events, including an appearance on the ‘Zee Antakshari Show’ (a popular Indian musical show) where he won appreciation with his performance in the ‘Folk’ category.

Sartaaj says: ‘Although I sang in university fests and the like, my performance at the Punjab Kala Bhavan-16 made me find my true calling.’

We had the pleasure of an intimate interview with Satinder Sartaaj on his visit to the UK and as a special treat we requested King G Mall the UK Bhangra artist and Dhol maestro to conduct the interview for DESIblitz.com: 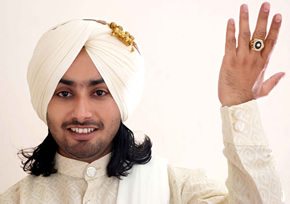 Sartaaj featured in the documentary on the life of Baba Bulle Shah aired on Alpha TV.

He was merited with the ‘Best Sufi Singer Award’ in 2003 at the ‘Dubai International Cultural Festival’ which he will always remember, especially the prolonged applause of people who loved his music- from 32 different countries!

When asked about what is Sufism? Satinder feels that Sufism is very much about being truthful, respectful and loving.

“When I was doing my PhD at University we discussed what Sufism was and I then realised it’s not about an appearance or belonging to a specific region but it’s about becoming Sufi and being loyal to it, that is the bigger thing.”

Satinder recorded his first album of Sufi music called ‘Mehfil-e-Sartaj’ in 2009 with the record label ‘Mahal Enterprises Ltd’. It included his style of poetry infused songs inspired by great Sufi’s such as Baba Farid, Bulle Shah, Sultan Bahu and Shah Hussain and was a compilation of his live recordings.

This was also his first commercial album and was followed by Ibadat-Mehfil-E-Sartaaj in the same year. 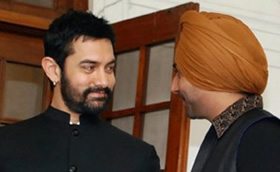 Subsequently, Sartaaj released a self-titled album with Speed Records and in 2011 there was an album called ‘Cheerey Wala Sartaaj’. Bollywood actors Aamir Khan, Jackie Shroff, Amisha Patel, Gracy Singh and Manisha Koirala were all present for the launch.

The albums ‘Sartaaj Live’ and ‘Putt Sardara De’ were released in 2012, continuing his success as a unique artist from the Punjabi diaspora.

Popular stars like Gurdas Maan are drawn to the talent of Sartaaj and attend his concerts -even showering him with money as a notion of gratitude to his art and acknowledgement/appreciation of this.

Poetry plays an important role in Sartaaj’s art and he told us that poetry came quite late into his life:

“It was after doing my Post-Graduate when I got attracted to poetry. It happened just out of the blue and it’s not about me but what I write and if that brings any happiness or calm in people’s lives, then it serves its unique purpose.” 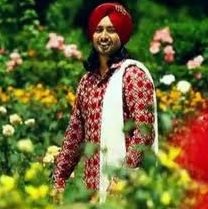 Nature is an inherent love for Sartaaj and he very often reflects this in his writing. When asked why is nature so important to him, he replied:

“I feel nature is one thing that is available to everyone, whether you are in India, UK or anywhere. So, if you can love for one of the biggest things given to us, then you do not need to have a love for small things. It’s my vice! And many of my songs are inspired by nature”

Satinder was asked about where does he see Punjabi art, culture and language going. He told us:

“If we talk about the language, there is no fear for it, from the point it was born it will always mature. However, my biggest concern is for written Punjabi especially not spoken. 90% of youngsters can speak very fluently and even in Punjabi universities and colleges, they cannot read or write it fluently. We need to pay attention to ‘Lippi’ because Punjabi is now being written in English.” 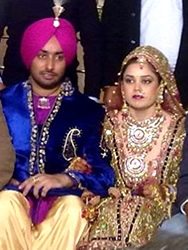 In his personal life, Satinder Sartaaj got married to Gauri, his long-term love interest, on 9th December 2010 at the Taj Hotel in Chandigarh.

The traditional Sikh ceremony was very low key to avoid media interest, having already been very anticipated and talked about prior to this as he was coined ‘Punjabi Music Industry’s most eligible bachelor’ up to this point. Only a selective amount of people were invited including close friends and relatives.

Gauri is from Dasuya, another village in the Hoshiarpur district of Punjab and was a school friend of Sartaaj’. Having attained a postgraduate qualification, she is studying for a PhD in Environment at Punjab University in Chandigarh, where Satinder Sartaaj is also an alumnus.

Sartaaj teaches in the Department of Music at the Punjab University and as an artist is touring the world spreading his art to global fans.

DESIblitz wishes this prodigy all the best and looks forward to hearing more from him.

Sasha is a fashion graduate/model with a passion for reading, writing, arts, culture, theatre and philanthropy work. She is inspired by ‘BE the change you want to see’ and firmly believes that ‘Education is knowledge and knowledge is power’.
Brit Asia Music Awards Nominees 2012
Jaz Dhami and BritAsia TV reconcile