Satinder Sartaaj will be performing live in the UK in October 2010. This incredible singer and poet will entertain audiences with a style deeply connected to Sufism. Win tickets to see this amazing artist for free.

the torch-bearer of the rich tradition of Punjabi culture

DESIblitz in association with One World Productions are proud to present a competition for you to win free tickets to the forthcoming concerts by Sufi sensation Satinder Sartaaj – Mehfil-E-Sirtaaj. The first UK tour for this distinct artist from Punjab.

Satinder Sartaj, (also referred to as Satinder Sartaaj) is an Indian Punjabi Sufi singer and poet. Born in Bajrawar, Hoshiarpur, Punjab, India this gifted artist first appeared on the international scene after he won the Best Sufi Singer award at the Dubai International Cultural festival in 2003.

Since then his popularity has seen a constant surge among the Punjabi diaspora with his shows held in many countries across the world and his style and persona being compared to those of the legendary Punjabi poet Waris Shah. He has often been declared as the torch-bearer of the rich tradition of Punjabi culture. 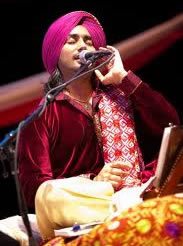 Satinder is highly qualified in music and languages with many qualifications including a Diploma in Classical Music, a Masters in Music from Panjab University and has completed a M.Phil and then a PhD with specialisation in Sufi music.

Sartaaj dresses in a very traditional Punjabi attire, similar to what the likes of Waris Shah used to wear, and unlike the common practices of turban-wearing-Sikhs, he sometimes keeps his hair flowing free, on top of which he wears his turban. Many say that his dressing sense is in harmony with the Punjabi culture and is a positive influence on the Punjabi youth.

The first commercial album released by Sartaaj was in 2009, which was a compilation of his live recordings called Mehfil-E-Sartaaj – Live Concert. Subsequently, he released Ibadat – Mehfil-E-Sartaaj and the ablum simply called Sartaaj in 2010. 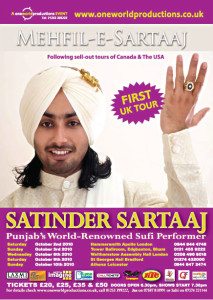 Sartaaj sings in his own unique and original style, Punjabi culture lives in the writings of his personality, his Sufi thoughts go deep in his poetry, and everyone gets lost in his composition.

This singer has dedicated several of his compositions to nature because from the beginning he was drawn to the beauty and fragrance of flower, rainbows, and the tranquil flow from the water creating rhythmic pattern.

Gifted with a mellifluous voice and a remarkable range in all octaves, Sartaaj followed the dictates of his inner soul and chose to reveal the glory of Mysticism. A performer not to be missed by any means.

*Due to popular demand this show is an extra show that has been put on.

FREE TICKETS COMPETITION
Three individual free tickets were available for you to win to watch Satinder Sartaaj live on stage at St George’s Hall in Bradford on 9th October 2010, at Athena Theatre in Leicester on 10th October 2010 or at Civic Hall, Wolverhampton on 14th October.

Tickets were won by answering this question ‘At which place does Satinder Sartaaj teach music?’

Winners
We had a fantastic response to the competition! Thank you for all of you that entered.

The winner of the Wolverhampton ticket was: Jagz Dail

The Winners of the two individual tickets for the Bradford or Leicester concert were: Gurpreet Singh and Surinder Saini.

Jas likes to keep in touch with the world of music and entertainment by writing about it. He does like hitting the gym too. His motto is 'The difference between the impossible and the possible lies in a person's determination.'
‘True Sound True Life’ tour ~ Free Tickets
Asha Bhosle Show ~ Free Tickets