Ajay Devgn shows off his survival instincts with Bear Grylls as the actor is set to appear in an episode of ‘Into The Wild With Bear Grylls’.

"it helped me explore and go beyond my comfort zone."

Ajay Devgn is set to appear in the survival reality show Into The Wild With Bear Grylls.

This makes him the third Indian actor to appear on the show, after Rajinikanth and Akshay Kumar.

The trailer shows Ajay embrace his adventurous side in the Indian Ocean that is “dominated by sharks and unfavourable weather”.

He then makes a catamaran with Bear as the pair reach an uninhabited island.

The trailer begins with Ajay sitting in a boat while he says in a voiceover:

“Games are for players, this is a stage for the bravehearts.”

Ajay then jumps into the ocean with Bear and the British survival expert is heard advising the Bollywood star to keep calm if he encounters a shark.

They then walk on an island where they make a catamaran out of things they find in the jungle.

The pair will also be seen discussing Ajay’s family and career.

Ajay said the show allowed him to step out of his comfort zone.

He explained: “This is my first ever expedition into the wild and I can tell you it wasn’t child’s play!

“My father was an action director and in my career span of 30 years in the Indian industry, I have had the fortune to play several roles including some dangerous action ones too.

“And, this was one of those times when I had to put those learnings to the test again.

“I’m so glad this opportunity came my way, it helped me explore and go beyond my comfort zone.

“A special salute to Bear who has been inspiring millions to explore and develop a much-needed relationship with nature, and of course to keep me safe in the wild. From hungry jungles to the depths of the ocean, Bear knows it all!”

On the experience, Ajay Devgn added:

“We plan film shootings, we know what we are going to do, there are rehearsals and then we have retakes.

“Here, we didn’t know what we were going to do, at least I didn’t. There were no retakes, you had to take chances.

“It was kind of dangerous, anything could have happened. We were into the wild, into unknown territory.

“Bear still knew a little bit about it but I was completely unaware of everything. It was scary, it was fun.”

Bear Grylls stated that he was impressed with Ajay’s commitment. He said:

“To get to take the legendary Ajay into the wild and have an adventure with him was a privilege.”

“Desert islands are always tough to survive on and Ajay showed total commitment to do what we needed to get out in one piece.

“He was also incredibly honest, sharing so many insights into his life and career and I value that honesty so much.

“One thing that I’ve learnt about Ajay is he is a quietly spoken man, but he is a man with great love and strength in his heart.”

Past celebrities on Into The Wild With Bear Grylls have also included Prime Minister Narendra Modi.

The episode with Ajay Devgn premieres on Discovery+ in India on October 22, 2021.

Watch Into The Wild With Bear Grylls Trailer 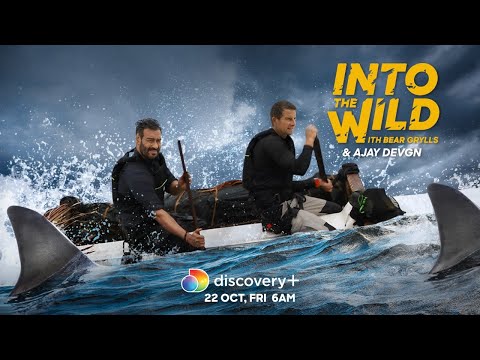 Dhiren is a journalism graduate with a passion for gaming, watching films and sports. He also enjoys cooking from time to time. His motto is to “Live life one day at a time.”
Saif Ali Khan reveals ‘Change’ in Taimur since Jeh’s Arrival
Anupam Tripathi reveals Mum’s reaction to Squid Game success