Anupam Tripathi has become an overnight superstar following the success of ‘Squid Game’. He has now revealed his mother’s reaction.

"She was very happy for me and congratulated me."

Anupam Tripathi has opened up on his mother’s reaction to his newfound stardom following the success of Squid Game.

The Indian actor starred in the Netflix show as Pakistani migrant Ali Abdul.

But the games have a deadly twist as players who are eliminated are killed.

Squid Game was released on Netflix in September 2021 and it has been a huge success, with the show reaching 111 million viewers worldwide.

As a result, all of the actors have become overnight superstars.

Anupam Tripathi has now revealed what his mother told him about his success. He shared:

“She is very sweet. I told her that her son is now being asked about from around the world.

“She was very happy for me and congratulated me.

“She also said, ‘Don’t fly high from your success. Be rooted to the ground’.

“That humility and that kind of upbringing she has given me and I am very thankful to her.

“All my relatives and people I know are very happy about the show and they have only great things to say.”

Anupam is originally from Delhi but moved to South Korea in 2010. He was seen in small roles before getting his big break in Squid Game.

He told Variety: “We felt that it will be received well, but when it became a phenomenon and sensation, it was not expected – I was not prepared.”

Anupam revealed that he landed the role of Ali after returning to South Korea from a brief trip home in January 2020.

He recalled: “At that time I didn’t have the correct body shape because I had just come back after eating home food, and once they said, ‘OK you are doing this character’, I was like OK now I have to put on weight, I have to work for it.

“I gained 5 or 6 kilograms and at least looked like somebody who has some power.”

His body transformation was due to the fact that one of the key elements of Ali’s character is his physical strength. 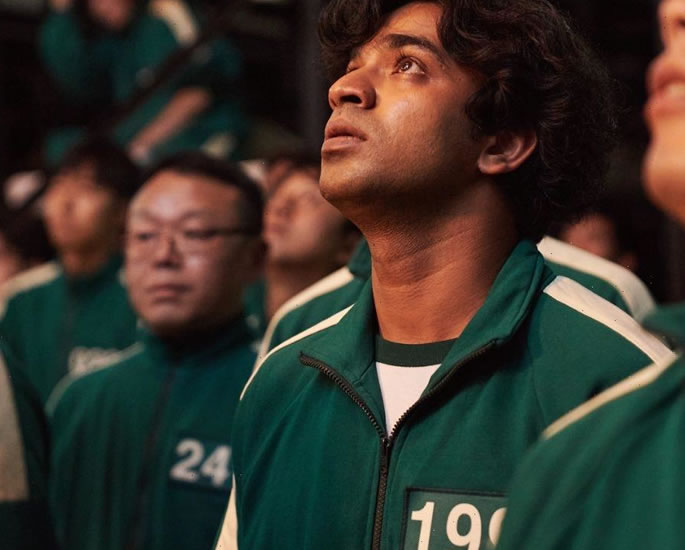 After landing the role, Anupam prepared for his role as a Pakistani character.

He did this by watching BBC documentaries and YouTube videos about Pakistani migrants. Anupam also spent time with Pakistani friends in South Korea to learn the subtle differences of Urdu dictation.

Anupam said: “I tried to go as close as I could to the character.

“I kept on thinking it’s going to be released in 190 countries, so how can I connect with the audience as a character.”

“That was my internal quest all the way the day from the day they said yes to me to the day it ended.”

He filmed Squid Game from June to October 2020 with a month’s enforced break due to the Covid-19 pandemic.

Anupam Tripathi added: “I really enjoyed working with this team, it was wonderful.

“The sets are majestic, magical – you go there, you become the character.

“That’s the kind of stage they have created. It helped everybody to evolve better. It was not that easy a process. But everybody was together.

“Ali came out from there and now everybody’s talking about it. I feel happy.”

Dhiren is a journalism graduate with a passion for gaming, watching films and sports. He also enjoys cooking from time to time. His motto is to “Live life one day at a time.”
Ajay Devgn shows his Survival Prowess with Bear Grylls
#NoBailOnlyJail trends on Twitter amid Aryan Khan case