For her second appearance at the Cannes Film Festival 2015, Aishwarya Rai pulled out all the stops in a ravishing Ralph & Russo haute couture gown.

It isn’t hard to believe why former Miss World, Aishwarya Rai, is considered one of the most beautiful women in the world.

The buzz surrounding the L’Oreal ambassador’s second Cannes red carpet appearance on May 20, 2015, was truly electrifying.

Having taken over L’Oréal Paris India’s social media accounts earlier in the day, Ash playfully teased fans by posting a picture of her stunning garment concealed in white bag.

Despite the heads up, nothing could ever prepare us for Ash’s breathtaking beauty. First glimpse of her highly anticipated second look at Cannes’ red carpet proved just that.

Stepping out to attend the premiere of Youth (2015), she looked absolutely flawless.

The white gown draped gorgeously over Ash’s figure. The burst of monochromatic black floral detailing covered her bust, whilst a sea of white ruffles perfectly cascaded down towards the trail of the dress. 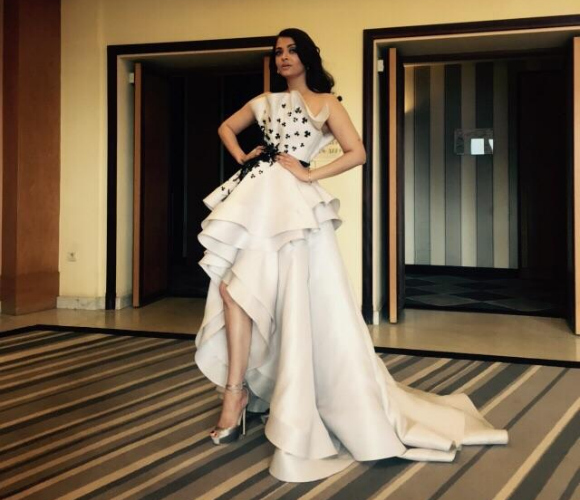 Her truly spectacular look was accessorised with diamond encrusted Chopard studs, as well as a pair of peep-toe Jimmy Choo stilettos.

Proudly representing L’Oréal, her makeup was stripped back. The nude colour palettes diverted all the attention towards the visually striking gown.

Her loose, tousled waves elegantly highlighted her beautiful features and kept her look simple and fresh.

The Jazbaa (2015) actress stole the style spotlight in this architectural design, putting paparazzi at the Palais Des Festival into a photo frenzy.

Ash signed off with a personal message on Twitter, saying: “It’s been a wonderful day in Cannes! Thank you for all the lovely memories!”

After putting on a show-stopping appearance, Aishwarya has definitely earned her place in many best dressed lists of Cannes 2015!