Have you ever seen a painting of your favourite international cricketer? DESIblitz discovers 6 best paintings of desi cricket players.

There are many paintings of famous desi cricket players, but which are the best?

There are artists from around the world who specialise in brushing international cricketers on their canvas.

Cricket is a popular sport followed by people of South Asian origin. Viewers excitedly watch their favourite players either on-screen or at the cricket ground itself.

However, over the years, fans of the sport have also admired some of the best paintings, featuring desi cricket players.

Artists of all backgrounds have commonly painted cricketers from India, Pakistan and Sri Lanka.

DESIblitz has found the best paintings of desi cricket players. Let’s take a closer look at, which artworks made the list: 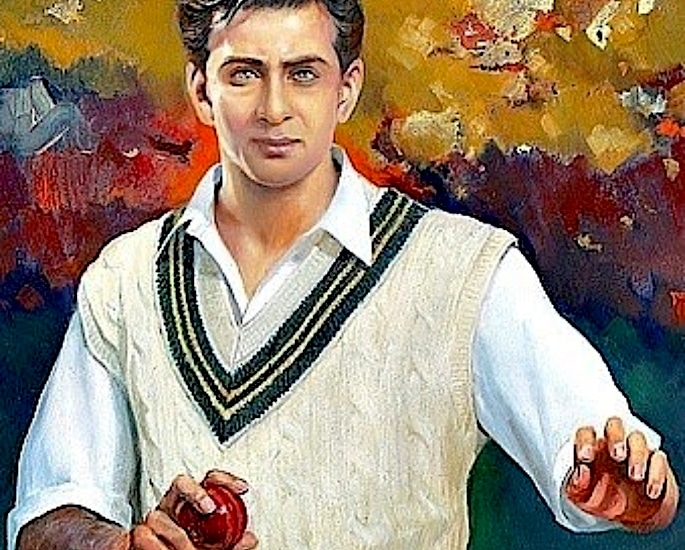 First, on our list, we have this glorious painting by Shanzay Subzwari. This image shows the famous Pakistani fast bowler Fazal Mahmood. He died in 2005, but with a painting like this, his memory continues to live on.

His success is difficult to forget. He was the first Pakistani cricketer to pass a hundred wickets.

A relaxed Mahmood looks ready to showcase a bowling masterclass. The painting almost looks like a posed Victorian painting.

His dashing looks shine through here, especially his sparkling eyes, luscious hair and a strong physique.

This painting highlights him in his younger days. He is wearing the Pakistan Test kit, complete with a white shirt and cream jumper.

The green details of the v-neck jumper symbolise Pakistan. The kit has a more subtle display.

Subzwari is a young female artist and freelance writer based in Karachi, Pakistan. 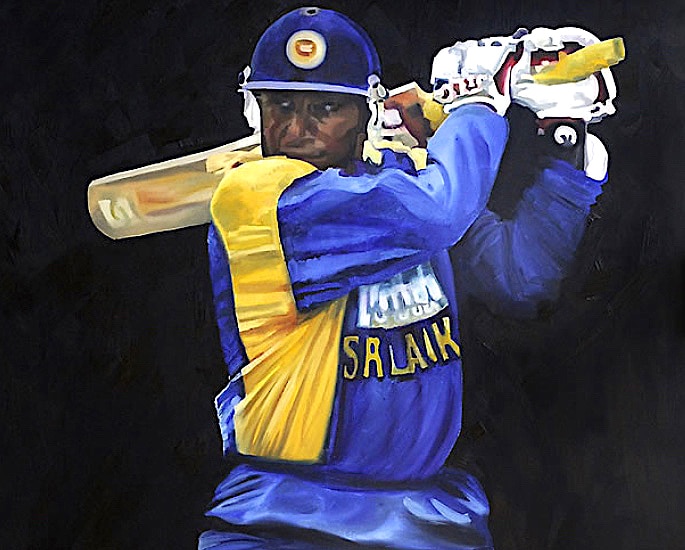 The painting highlights Silva smashing the ball to the off-side, showing some true intent.

He is wearing the traditional blue One-Day-International (ODI) kit, with the country name, as well as the shoulders and sides in yellow.

He is the only cricket player to feature in our list to wear a helmet, which has the Sri Lankan emblem on it.

The painting goes well with a black background. The final painting is visibly neat.

The sponsors’ logos and names are cleverly blurred on the bat of Silva and the centre of his shirt.

Pierce refers to herself as a cricket artist. She is very passionate about the sport, having managed teams in West Surrey for five years.

In addition, her father coached cricket in Cornwall, which is where she grew up. 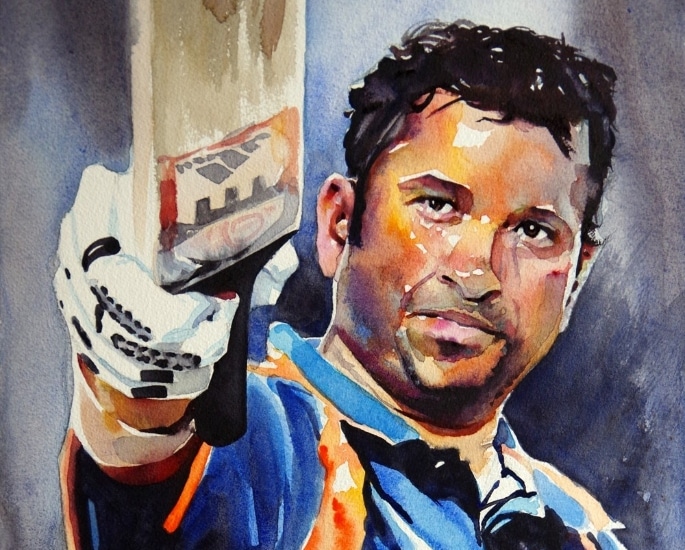 Tendulkar is widely regarded as one of the greatest batsmen in the history of cricket. This painting shows him coupled with his bat in his Team India cricket uniform.

Holding his bat in this fashion suggests that he is saluting to the dressing room and spectators, after reaching a major landmark.

Tendulkar’s helmet is off as he is sporting his limited-overs kit, which includes the tricolour of orange, reflecting the Indian flag.

The detail of this painting allows the viewers to see all the elements of the cricket kit, including the sponsors on his bat.

The use of watercolour to paint this piece reflects the sweating face of Tendulkar. This is specific to his forehead, cheeks and hair.

The painting feels realistic as viewers recall their favourite memories of Tendulkar.

There is a lot of concentration and determination in the eyes of Tendulkar. He is clearly ready for continuous action.

Joseph Broderick who has completed a fine arts degree likes to mix watercolour with pen and ink. 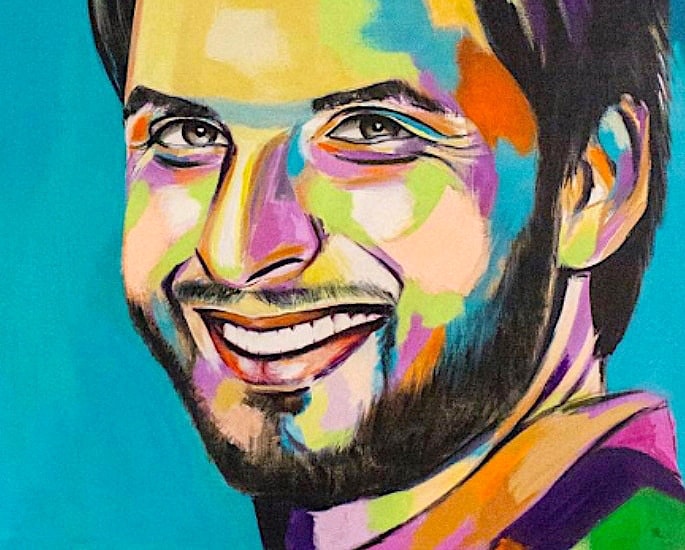 Afridi is affectionately known as ‘Boom Boom’ across the cricket fraternity.

This painting shows Afridi smiling. This is something typical of this light-hearted man who brings his sense of humour with him to the pitch.

This painting reflects her work, which focuses on pop culture, consumerism and the unseen. As she states on her website:

“My work combines elements from Mughal miniature paintings, currency notes and popular culture to comment on politics, history, society and the human condition.”

This impressive artwork was painted by Subzwari during the third year of her Bachelor’s. It was one of the many paintings that made up her ‘Hero Worship’ exhibition in Karachi.

Subzwari’s painting of Afridi stands out, especially with her use of colour. Vivid contrasting colours such as orange, blue, purple and green come together to make up the face of Afridi.

Of course, the green in his shirt is an important reminder of his Pakistani nationality.

This is a bold and striking painting of a well-loved cricket player. 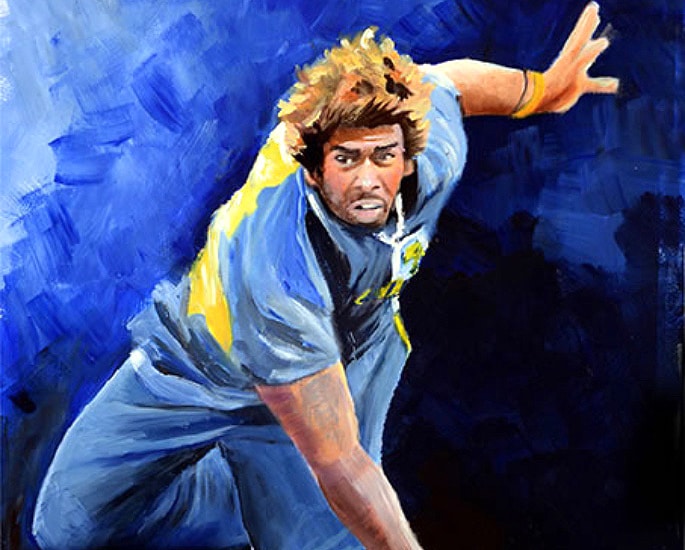 This is an oil painting on board by Christina Pierce of Sri-Lankan fast bowler Lasith Malinga.

Fans appreciate the bowling skill of Malinga, particularly his sling action, which gave him the nickname ‘Slinga Malinga.’

This painting shows him in the midst of what he’s best at.

It is amazing how Pierce captures Malinga in this freeze-frame. The application, along with hope is evident in his facial expression, as he follows through after bowling a powerful delivery.

The use of brush-strokes in the blue background, as well as in his hair, gives the painting authority. It also showcases a unique painting style particular to Pierce.

She mixes smoothly with harsh brush strokes in this painting.

We are also able to make out the tattoos on his arm thanks to the use of shading by Pierce.

The vivid cobalt blue of this painting emphasises the importance of this colour to fans of The Islanders. Malinga is wearing his limited-overs kit – the blue and yellow symbolising the Sri Lanka cricket team. 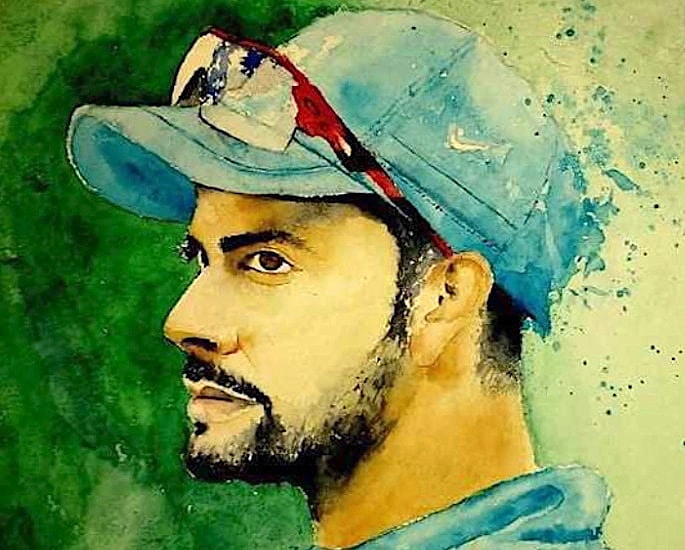 Finally coming back to India, we have this watercolour painting on handmade paper of Indian star batsman Virat Kohli by Nitesh Rajput.

Kohli holds many records for the Men in Blue, emulating the success of Tendulkar. The painting cleverly uses subtle colours for this piece.

The expression on the face of Kohli is important here. Kohli looks serious, suggesting that he is either incredibly focused or concerned. Perhaps this match is not going according to plan or Kohli is not getting carried away.

He is known for not putting on an act in public. He has previously stated:

“I like to be myself, and I don’t pretend. For instance, I don’t dress up for occasions; I am what I am.”

There is nice green in the background. He is wearing a blue shirt and matching cap. The sponsor’s logo is on the cap in white. The warm skin tone is also reminiscent of the orange stripe in the Indian flag.

Together, this painting is like an emblem of Indian nationality.

The sunglasses on his cap suggest that he is playing or standing in hot conditions. Nitesh Rajput is a painter from Patna, India.

There are many other paintings of desi cricket players from India, Pakistan and Sri Lanka.

Fans love to see their favourite players on television, but there is something special about a painting.

Cricket lovers will admire these paintings as they must have taken many hours to create.

We hope you enjoy these paintings as much as we do!