Bollywood shares a close link with the city of London. Take a look at 20 films which have been shot against the backdrop of this great city.

"Bollywood movies is seen as a bonus by Londoners"

Numerous Bollywood films have been shot in London over the years from captivating dance sequences to dramatic scenes.

India’s love for London dates back to the time of immigration in the 1950s when numerous Indians set out for the capital city in search of a better life.

During this time, Bollywood films were screened on projectors in areas like Hounslow, Upton Park and Southall.

According to the chief of Film London and the British Film Commission, Adrian Wootton:

“The links between London and India are deep and strong. They have a great amount of shared history which provides a rich tapestry for storytelling and it is appealing to filmmakers.”

For a Bollywood production to be shot in London it must meet three requirements.

These include a minimum of 25% of costs must be spent on filming activities within the UK, a cultural test and the film must be made for commercial cinema.

We present twenty Bollywood films that have been shot in the renowned city of London. 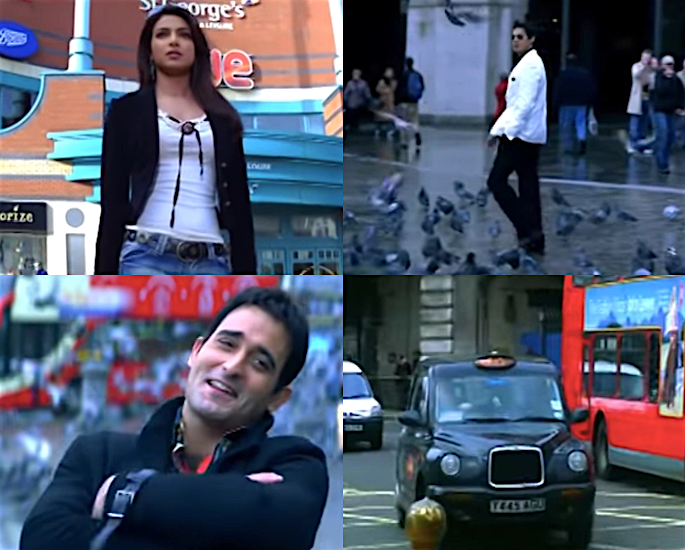 Anu Khanna (Priyanka) is a London-based NRI who moves to India after her ex-boyfriend dumps her.

She travels back to London to attend her sister’s wedding. Anu (Priyanka) convinces her colleague Aman Mehra (Akshaye) to pose as her partner to make her ex-boyfriend jealous. 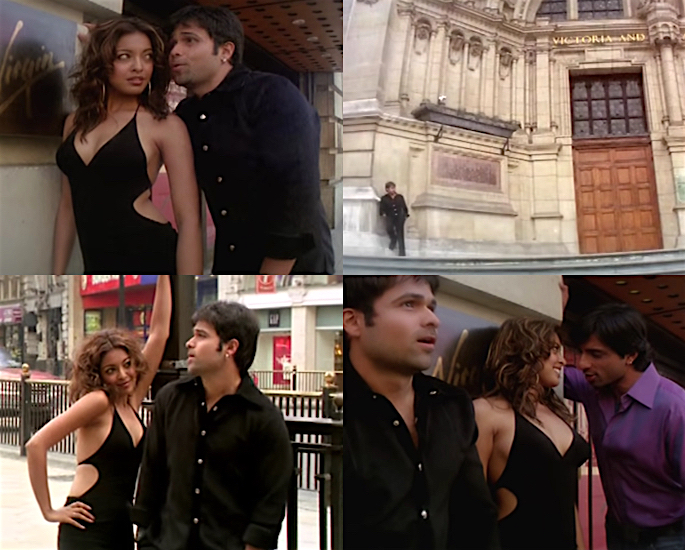 The 2005 film marked the debut of Tanushree Dutta and was filmed in the capital city of England.

The film revolves around the love triangle of Karan (Sonu), Sneha (Tanushree) and Vicky (Emraan).

Karan (Sonu) loves Sneha (Tanushree) although he is unable to express his feelings. 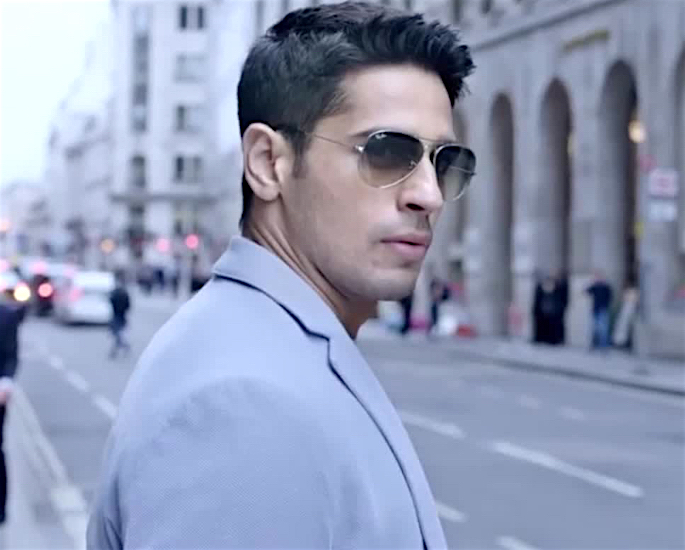 Aiyaary (2018) follows the story of Jai Bakshi (Sidharth) who falls out with his mentor Colonel Abhay Singh (Manoj).

Jai (Sidharth) goes rogue and his mentor is forced to hunt him down. 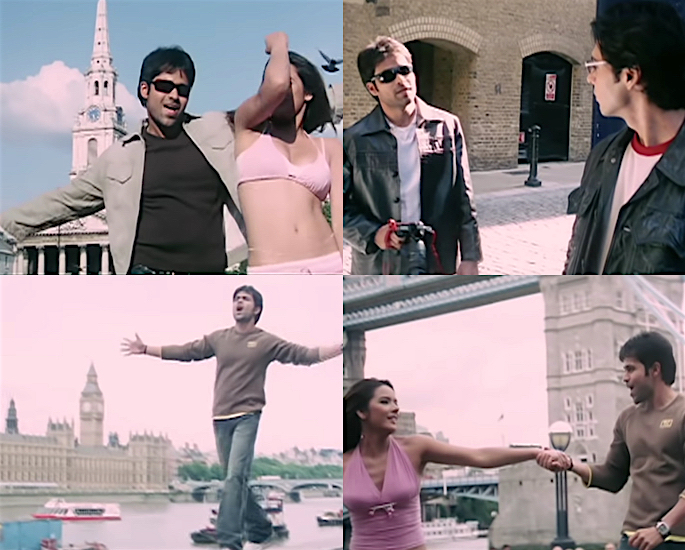 Anant Mahadevan’s Aksar (2006) showcased the picturesque sights of London like the Tower Bridge.

Rajveer is determined to get his wife to grant him a divorce to avoid having to pay an expensive pre-nuptial agreement.

However, things do not turn out the way Rajveer intended. 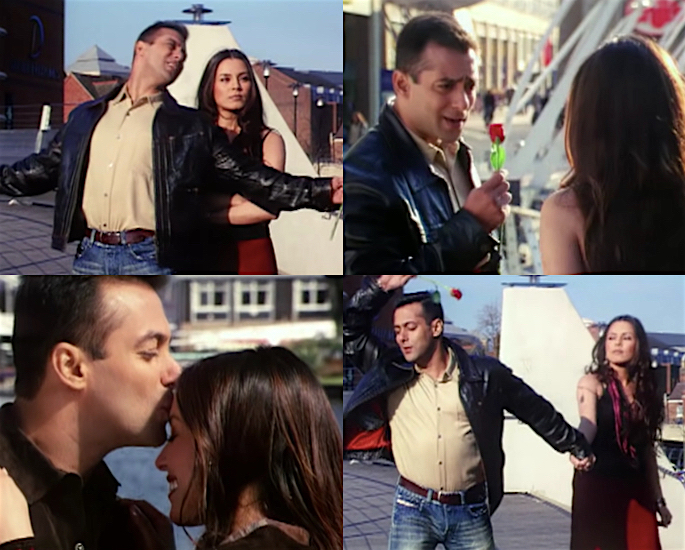 Amitabh Bachchan and Hema Malini made everyone’s heart melt with their performance in Baghban (2003) which was filmed partially in London.

Raj (Amitabh) and his wife Pooja (Hema) have raised their four sons with affection and love.

The couple retires with the hope that their children will take of them in their old age.

However, their desires are shattered when their sons and daughters-in-law are reluctant to take care of them.

As a result, the children come up with an arrangement of taking each parent for six months and then rotating.

The song ‘Pehle Kabhi Na Mera Haal’ which was pictured on Salman Khan was shot in the picturesque locations around London. 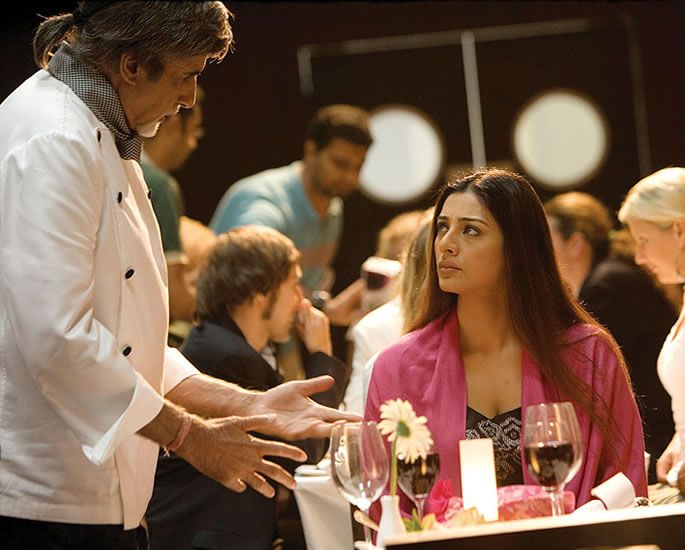 Big B took to London along with his co-star Tabu to shoot for their film, Cheeni Kum (2007).

The film was shot in various places around London like the Piccadilly Circus, Carlos Place in Mayfair and Beauchamp Place in Knightsbridge.

Cheeni Kum (2007) was a Bollywood romance film which revolved around the love story of a 64-year-old chef, Buddhadev Gupta (Amitabh) and 34-year-old software engineer, Nina (Tabu). 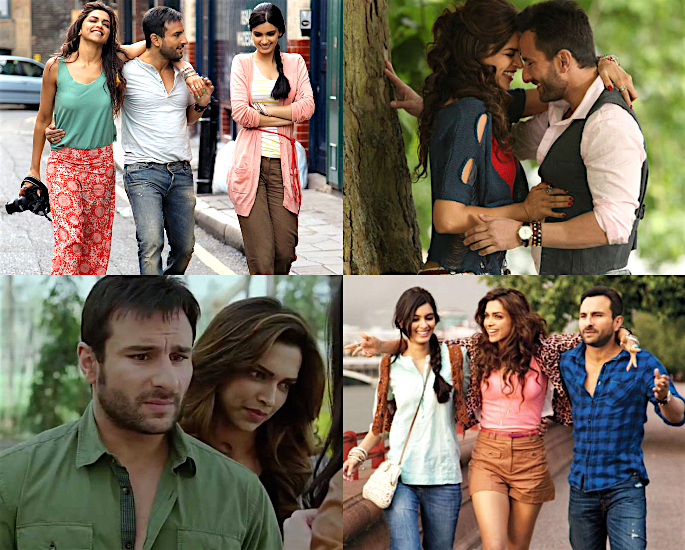 The Cocktail (2012) team took to the streets of London to shot for their film. It was shot in numerous parts of London. These include:

There is no doubt the Cocktail (2012) team scoured London to find the best spots to shoot the film.

The film follows the lives of Veronica (Deepika) and Meera (Diana) who strike up an unlikely friendship.

Gautam (Saif) enters their lives. Things begin to get complicated when love meddles with their friendship. 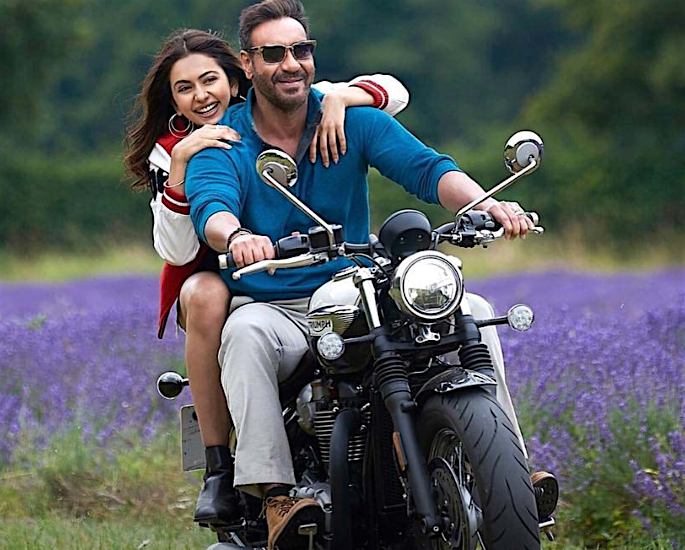 Despite the film being shot in Kullu and India, the second shooting schedule commenced in July 2018 in London.

He falls in love with 26-year-old Ayesha Khurana (Rakul Preet Singh) and must fight for his family and ex-wife (Tabu) to accept his relationship. 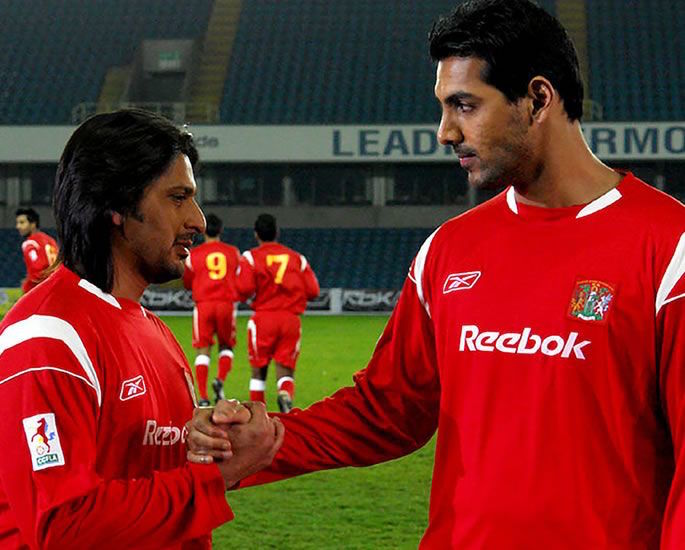 John Abraham and Bipasha Basu’s Dhan Dhana Dhan Goal (2007) uses the backdrop of Southall in London for the football-based film.

John Abraham plays the role of a sought after footballer by the struggling Southall United Football Club.

Bipasha Basu played the role of his love interest and one of the player’s sister. 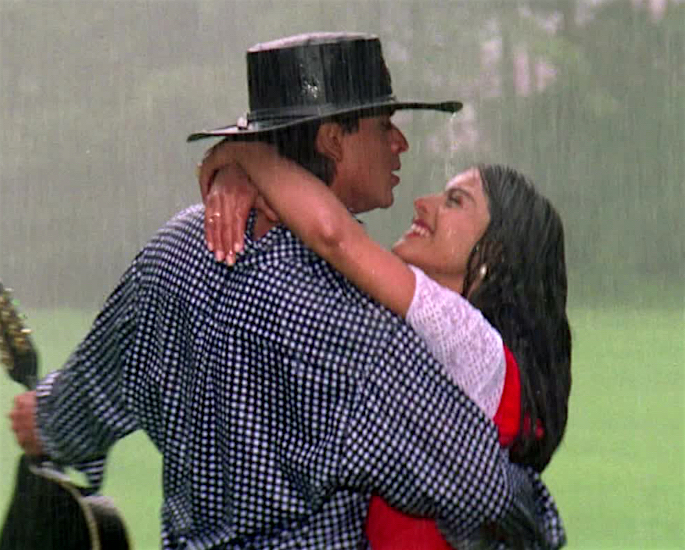 Whether you grew up watching Dilwale Dulhania Le Jayenge (1995) or not, this is surely one of Bollywood’s most iconic films.

The film begins in the backdrop of London where the two stars Raj (SRK) and Simran (Kajol) reside.

The famous opening scene is shot in Trafalgar Square, known as the heart of London.

Reportedly to avoid a crowd gathering, the opening scene where Amrish Puri feeds the pigeons and is seen walking through the square, was shot in the early hours of the morning.

During the song, ‘Ghar Aaja Pardesi’ a snapshot of the Big Ben, Buckingham Palace and the Tower of London can all be seen.

Also, the setting for Simran’s (Kajol) house as well as her father’s (Amrish) store were set in Southall.

The renowned train station scene where Raj pulls Simran into the train took place at a platform in King’s Cross railway station. 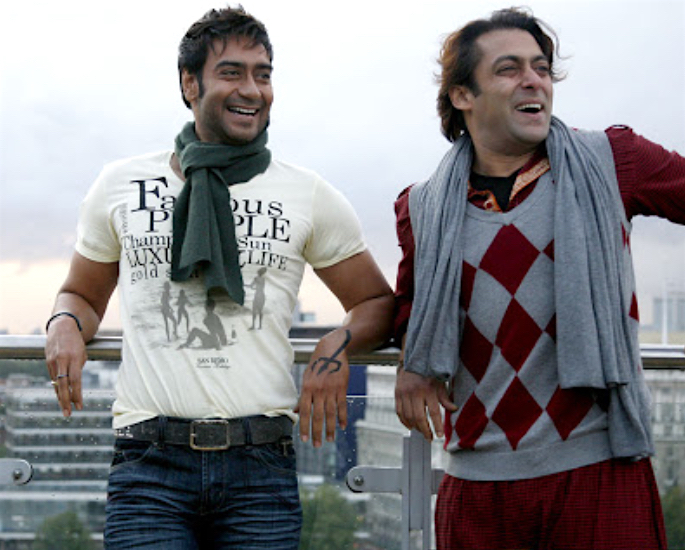 Salman Khan, Asin and Ajay Devgn went to London to shoot for their film London Dreams (2009).

This was director Vipul Shah’s second film set in London.

Raja (Ajay) wishes to fulfil his desire of wanting to play in a rock band at Wembley Stadium, London.

Munnu (Salman) who is Raja’s childhood friend, joins the band. However, a rivalry develops between the friends as well as a love triangle with Priya (Asin). 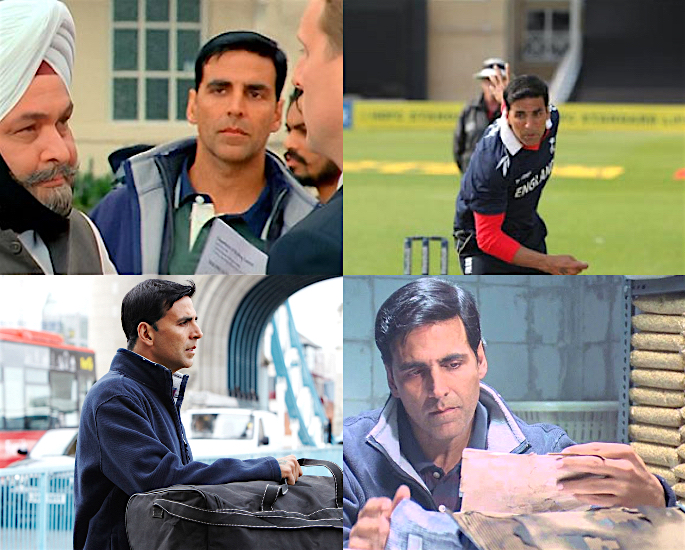 Akshay Kumar and Anushka Sharma’s Patiala House (2011) was shot in Southall, Harrow and the Wealdstone Food and Wine store.

According to Harrow Times, Oniaza Ahmad an employee at Harrow Solicitors and Advocates said:

“I think it’s brilliant for Wealdstone because Wealdstone never gets anything like this.

“Akshay Kumar is very famous in India, he has done quite a lot of movies and is a big star.” 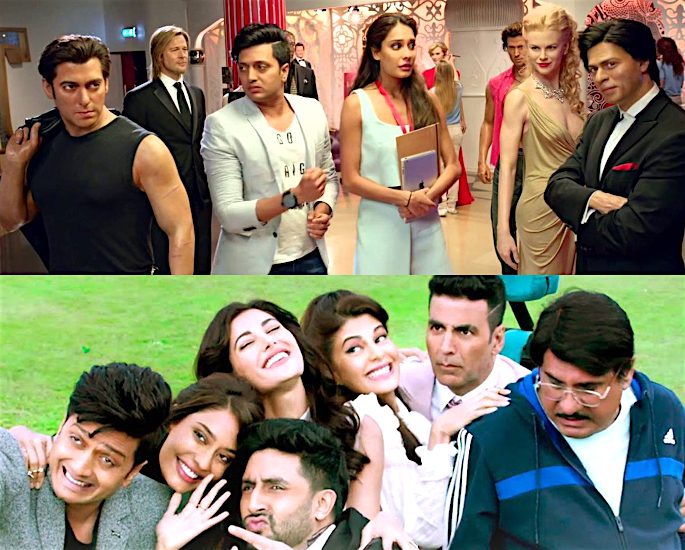 The crew of Housefull 3 (2016) travelled to London to the Mansion Bloomsbury.

According to a source close to the developing of the film, spoke to Mirror at the time of the shooting for the film. The source said:

“Akshay, Abhishek and Riteish are flying together to the UK from Mumbai. It’s a 40-day schedule and the cast will fly in and out.”

Majority of the film was filmed in the London bungalow with the ending ensemble song being shot in Mumbai. 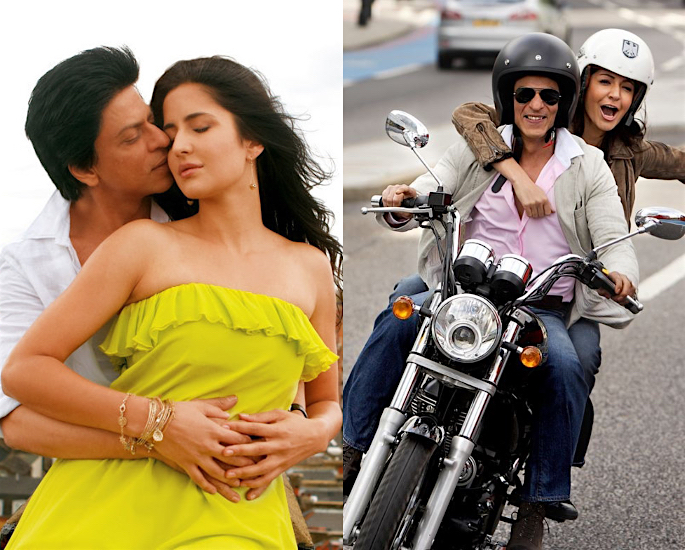 The beginning of the film shows Katrina running in front of All Saints Parish Church in Blackheath, London which was covered with a layer of artificial snow.

“One of the songs where Shah Rukh keeps running into Katrina has been filmed at many different places across the capital.

“Literally every frame shows the actors meeting against the backdrop of iconic London images and street scenes.

“Following an early incident where SRK and Kat were almost mobbed and their cars were chased by fans, Yash Raj Films had to be cautious, particularly when filming in public areas.” 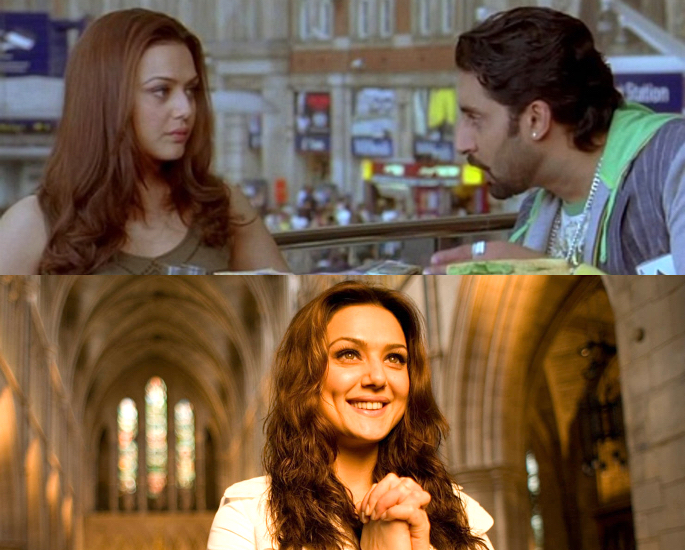 Bollywood hit the streets of London with zest and pomp with the cast of Jhoom Barabar Jhoom (2007).

Londers were also offered hundreds of supporting roles to add to the authenticity of the location.

Director Shaad Ali Sahgal explained his purpose of shooting in London. He said:

“My inspiration for Jhoom Barabar Jhoom (2007) was to explore the hearts of Indians in Southall.

“We wanted to shoot at major London locations which are obviously very crowded but thanks to careful planning and co-ordination we managed to achieve fantastic results.” 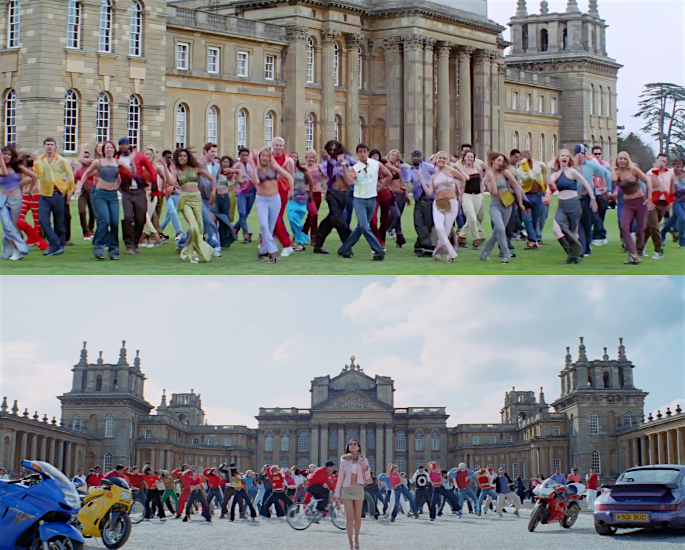 Undoubtedly, the filmmakers ensured the best locations in London were used in the film.

Kabhi Khushi Kabhie Gham (2001) is “all about loving your family” and there is no denying that it continues to hold a special place in the hearts of many Bollywood fans. 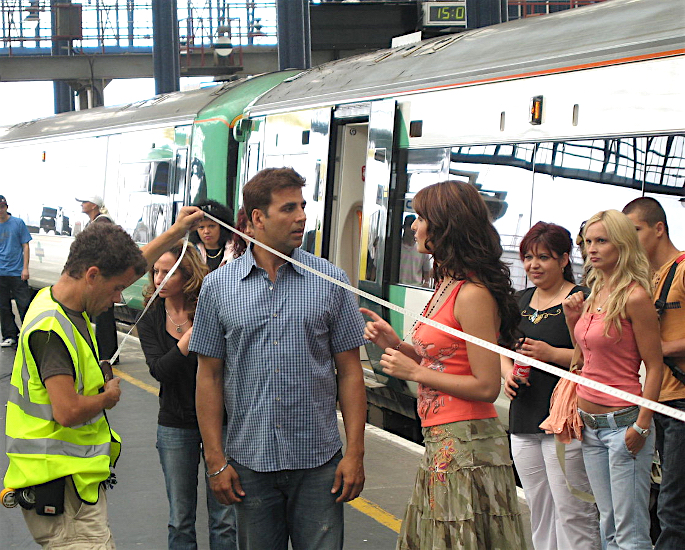 The title of the film gives it away. Namastey London (2007) was shot in the great city of London.

It was also shot in around 50 locations in Britain such as Slough, Windsor, Bromley and more.

Jasmeet’s (Katrina) father wishes that his daughter married an Indian boy. He takes her back to India and gets her married to Arjun (Akshay).

Upon returning to back to London, Jasmeet announces her intention of marrying her boyfriend.

Will Arjun succeed in winning over his wife or will he lose her forever? Watch the film to find out. 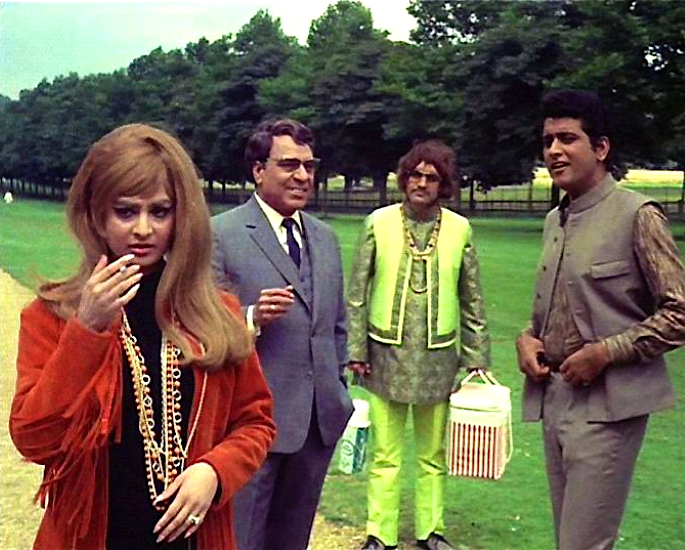 According to Bollywood Hungama, Deepa Gahlot said: “By linking the story to the freedom struggle, Manoj Kumar was saying that freeing India from British rule is not enough if Indians do not feel proud of their ‘Indianness’.

“Manoj shot in London at the height of the ‘hippie’ phase and caught both the beauty and ugliness of the English landscape.

“However, his simplistic view of the West was greed, lust and depravity, while India stood for love, honour and piety.”

Allegedly, Manoj Kumar did not like travelling by air, therefore, he left India by ship for England a month before the crew left for England. 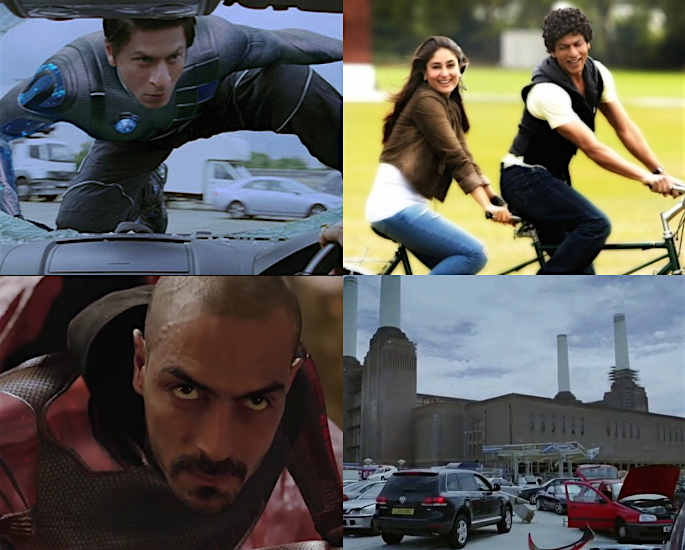 Bollywood superstar SRK made the most expensive film in the history of Bollywood with the superhero film, Ra.One (2011).

The king of romance serenaded Kareena Kapoor at the Tower Bridge and chased cars in Canary Wharf.

The battle ended with SRK beating Arjun Rampal in the final fight sequence which was shot at the Battersea Power Station.

It was estimated that the team of Ra.One (2011) spent a staggering £5 million in London. 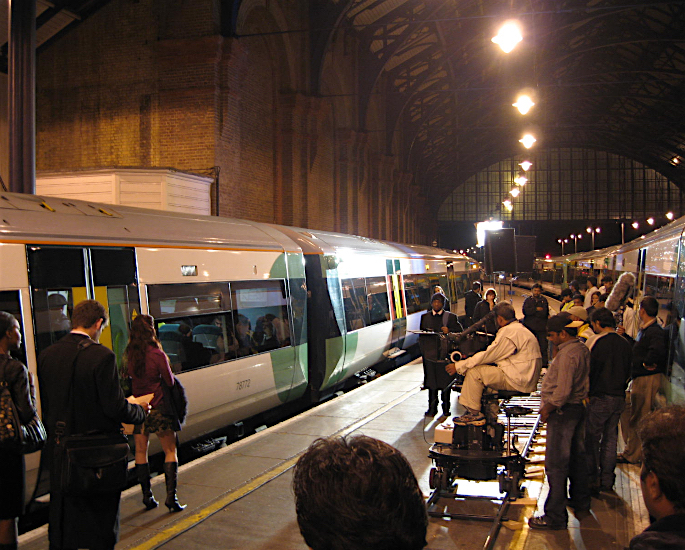 Salaam-e-Ishq (2007) pays a tribute to love. The initial shooting for the film began in Mumbai before moving to London.

The film captures the trials and tribulations faced by six different couples.

Each couple must overcome various problems to make their love triumph all odds.

Undoubtedly, Bollywood’s craze with London has led to the capital city gaining income as well as a boost in tourism.

Bollywood fans have witnessed the iconic landmarks of London in all their glory in Bollywood films.

According to an official and media agency, London earns a large revenue from Bollywood. They said:

“The filming of Bollywood movies is seen as a bonus by Londoners as it brings revenue. Indian productions are worth $28 million (£21,655.480) annually to the London economy.

“There is no doubt that by choosing London as a location for filming Bollywood is making a destination for tourists.”

Despite this seemingly perfect combination of Bollywood and London, it seems there is a twist in the tale.

The UK economy has been undergoing major changes because of Brexit which will affect foreign interaction, revenue and relations with the nation.

Unfortunately, Brexit will hinder foreign links like Bollywood from attaining rights to the film in the capital.

Instead, Bollywood will turn to other cities or countries like Scotland which will provide an easier method of attaining permission to shoot films.

Yet, what the officials of the UK economy do not realise is that the country will be at a major disadvantage if one of the biggest film industries in the world turns its back on London.

There is no doubt Bollywood is in love with London, however, their relationship appears to be in jeopardy over Brexit.

Ayesha is an English graduate with an aesthetic eye. Her fascination lies in sports, fashion and beauty. Also, she does not shy away from controversial subjects. Her motto is: “no two days are the same, that is what makes life worth living.”
Disha & Aditya’s ‘Malang’ crosses Rs 50 Crore Mark
Katrina Kaif asks Arjun Kapoor ‘did you lose something?’