The winners of the 62nd National Film Awards were announced on March 24, 2015. Queen and Haider won big with Kangana Ranaut picking up the gong for Best Actress. DESIblitz has the full list of winners.

"I couldn't have asked for anything more than this."

Celebrating the incredible industry of cinema across India and its surroundings, the 62nd National Film Awards were announced in a special conference on Tuesday 24th March, 2015.

Chairpersons, Bharathiraja and Kamal Swaroop of the National Award Jury presented their results to Arun Jaitley.

Priyanka Chopra was also up for the Best Actress trophy, but lost out to Kangana. She later tweeted:

I hate losing.But if I had to take a back seat to anyone this year it would be U #KanganaRanaut ! Congratulations!yay Queen!#SmallTownGirls

But all was not lost for Priyanka as Mary Kom was also awarded ‘Best Popular Film’, while Diljit Dosanjh’s Punjab 1984 took ‘Best Punjabi Film’. 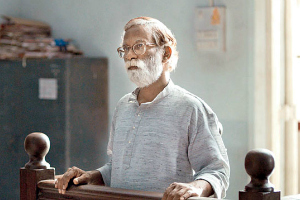 Sukhwinder was reportedly delighted with the award, saying: “It’s an amazing feeling. Vishal Bhardwaj is a fabulous person and a good musician.

“‘Bismil’ deserves this appreciation and Gulzar has put in a beautiful soul in the track with his words.

Shahid sadly lost out to the ‘Best Actor’ award to Kannada actor, Vijay. The actor won the award for playing a transgender in Nanu Avanalla Avalu (I Am Not A He, But She). The talented actor said:

“I put in a lot of effort to understand and portray the role of a transgender, which is an unnatural phenomena to me because I am a straight man.”

‘Best Feature Film’ was awarded to Court. Director, Chaitanya Tamhane was shocked by the news saying: “I didn’t know National Award was getting announced today. It came as a big surprise for me and my entire team. I couldn’t have asked for anything more than this.”

Here is the full list of winners of the 62nd National Film Awards:

Best Environment Film Including Agriculture:
“I Cannot Give You My Forest”

Special Jury Award:
“A Poet, A City & A Footballer”

Best Film On Family Values:
“Towards the Silver Lining”

Winners will reportedly receive their awards in New Delhi on May 3rd, 2015 from President Pranab Mukherjee. Congratulations to all of the winners!

Nazhat is an ambitious 'Desi' woman with interests in news and lifestyle. As a writer with a determined journalistic flair, she firmly believes in the motto "an investment in knowledge pays the best interest," by Benjamin Franklin.
Margarita With A Straw wins Asian Film Award
Katrina Kaif unveils Madame Tussauds Wax Figure