Why does Google show Anushka as Rashid Khan’s Wife?

Anushka Sharma has been named as the wife of Afghanistan cricketer, Rashid Khan on Google. Yet, how did Google make this shocking mistake?

It caused confusion on the Google search engine.

Search for cricketer Rashid Khan’s wife in Google and you will surprisingly see results which state Bollywood actress Anushka Sharma as his wife.

There is no doubt that this has left many people scratching their heads wondering how this happened.

However, there is a reason behind this mishap for linking the Afghanistan cricket star and the actress.

He was asked to name his favourite actresses. In response to this question, he named Bollywood actresses Preity Zinta and Anushka Sharma.

It appears this was all that was required for fans to link Rashid and Anushka.

As a result of this going viral online, it seems it caused confusion on the Google search engine. 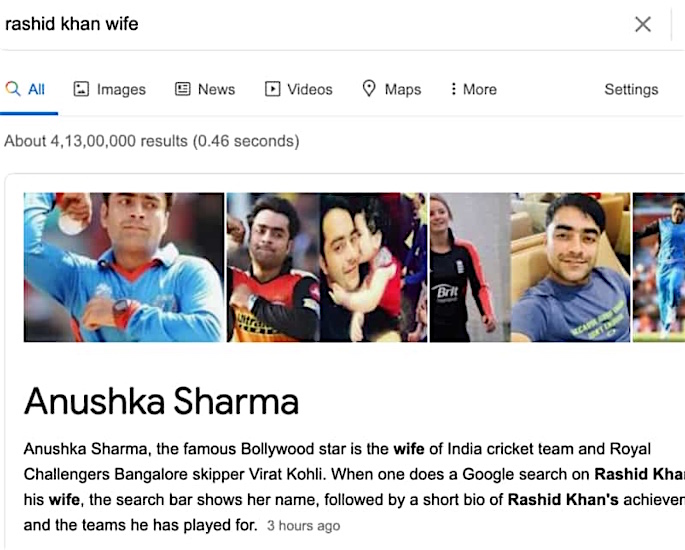 In reality, Anushka Sharma is married to Indian cricketer Virat Kohli. The pair tied the knot in 2017 in a lavish wedding ceremony.

In fact, the couple is expecting their first child together.

The actress was spotted blowing her husband Virat a kiss from the visitor’s area which caught the attention of spectators.

Virat, who is known as one of the world’s best batsman, scored an unbeaten 90 runs in the match.

After his half-century, Virat Kohli gestured to his wife.

The actress has come under fire numerous time as she is often blamed for Virat’s poor performance on the field.

The cricketer-turned-commentator, Gavaskar made a shocking remark while delivering commentary during the Royal Challengers Bangalore and Kings XI Punjab. He said:

“That, Mr Gavaskar, your message is distasteful is a fact but I would love for you to explain why you thought of making such a sweeping statement on a wife accusing her for her husband’s game?

“I’m sure over the years you have respected the private lives of every cricketer while commentating on the game.

“Don’t you think you should have equal amount of respect for me and us?”

Meanwhile, Rashid Khan is not married and certainly not to Anushka Sharma.

Ayesha is an English graduate with an aesthetic eye. Her fascination lies in sports, fashion and beauty. Also, she does not shy away from controversial subjects. Her motto is: “no two days are the same, that is what makes life worth living.”
Anup Jalota: I wouldn’t have married Jasleen even if I was 35
Kangana Ranaut reacts to Ira Khan’s Depression