Actress Anushka Sharma has once again been blamed as being the cause of her husband, Virat Kohli’s poor cricket performance.

"When will I stop getting dragged into cricket"

Bollywood actress and wife of cricketer, Virat Kohli, Anushka Sharma has slammed commentator Sunil Gavaskar for his distasteful comments about Virat’s performance on the field.

Taking a dig at Virat, Gavaskar stated that the world-class cricketer has only trained against Anushka Sharma’s balls during the coronavirus lockdown. He said:

“That, Mr Gavaskar, your message is distasteful is a fact but I would love for you to explain why you thought of making such a sweeping statement on a wife accusing her for her husband’s game?

“I’m sure over the years you have respected the private lives of every cricketer while commentating on the game.

“Don’t you think you should have equal amount of respect for me and us?

“I’m sure you can have many other words and sentences in your mind to use to comment on my husband’s performance from last night or are your words only relevant if you use my name in the process?

“When will I stop getting dragged into cricket and stop being used to pass sweeping statements?

“Respected Mr Gavaskar, you are a legend whose name stands tall in this gentleman’s game. Just wanted to tell you what I felt when I heard you say this.” 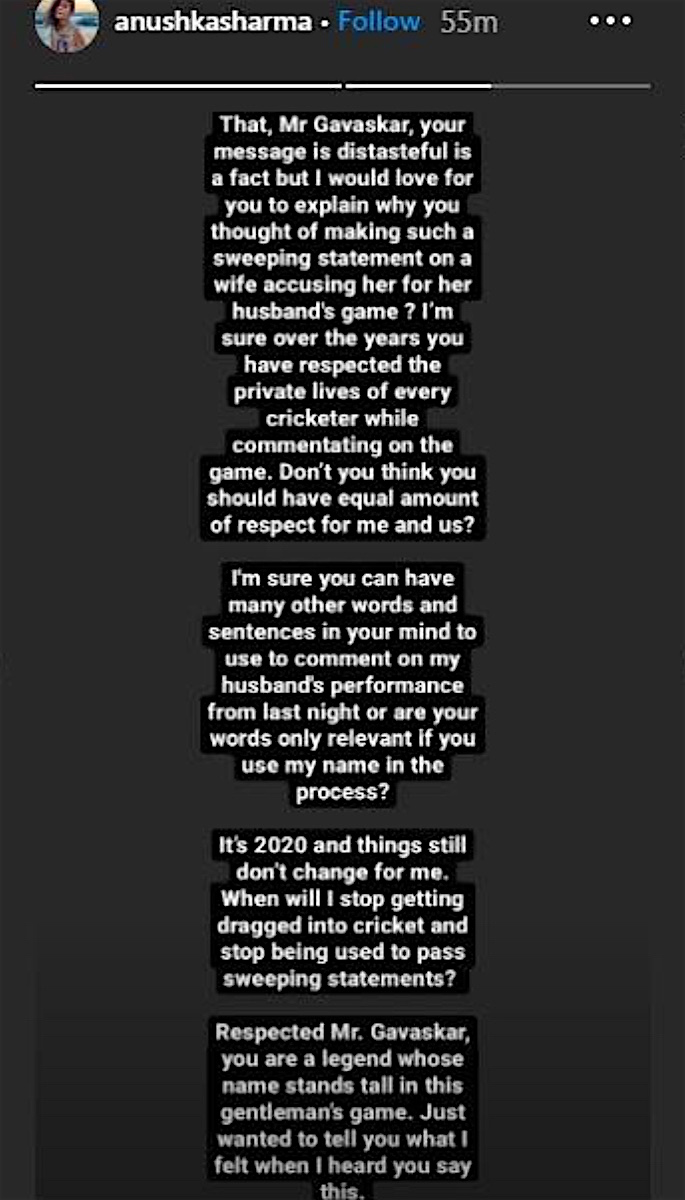 This is not the first time Anushka has been blamed for Virat’s performance on the field. In 2019, Anushka was blamed for her husband’s poor performance. She wrote:

“I have stayed quiet through all the times I was blamed for the performance of my then boyfriend, now husband Virat and continue to take the blame for the most baseless things involving Indian cricket. I kept quiet then.”

“Today, I have decided to speak up because someone’s silence cannot be taken as their weakness.”

“I am not and will not be a pawn to be used by anyone’s thoughts or beliefs or agendas and next time you want to use my name to discredit someone or the board or even my husband, do it with facts and proof & leave me OUT of it.

“I have led my life, built my own career with utmost dignity and I am not going to compromise that for anything. maybe, it’s hard for some to believe that, because, I am a self-made, independent woman who only happens to be the wife of a cricketer.”

Meanwhile, Anushka and Virat are expecting their first child together.

Ayesha is an English graduate with an aesthetic eye. Her fascination lies in sports, fashion and beauty. Also, she does not shy away from controversial subjects. Her motto is: “no two days are the same, that is what makes life worth living.”
NCB say Deepika Padukone is Admin of WhatsApp Drugs Chat
Rakul: Dharma’s Kshitij Prasad gave Drugs to 4 Stars