A UK-based Indian restaurant has embarked on a recycling mission by using tiffin boxes in a bid to reduce the use of plastic.

"the tiffin idea came from my parents"

An Indian restaurant in Bradford has decided to use tiffin boxes as takeaway containers as a way of reducing plastic usage.

Harry Khinda, who runs The Crafty Indian, was inspired by his father’s stainless steel tiffin box. He then launched a takeaway system that was not reliant on plastic.

Mr Khinda’s family originate from Punjab. They settled in the UK during the 1960s.

He said he came up with the concept of offering discounts to customers who use the reusable tiffin boxes as his mission to fight against unsustainable single-use plastic.

“The inspiration came from our desire to stop using single-use plastic containers and carrier bags.

“Much the same as many people around the world, we have become increasingly aware of the problem associated with plastic use and waste and the negative impact this is having on our planet.”

The businessman went on to say that India and Indians have naturally been reusing many items as part of their daily lives.

This has contributed to at least slowing down the negative impact of single-use plastic within a populated country. 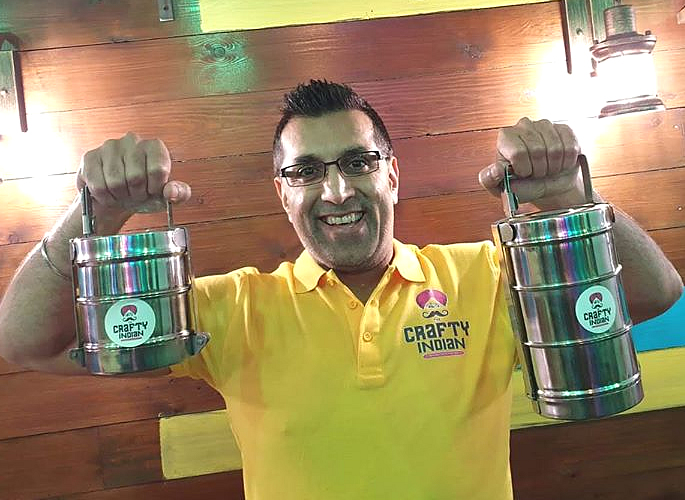 “It comes as no surprise that the answer to this problem has been staring us in the face for many decades.

“Therefore, the tiffin idea came from my parents who are originally from Punjab.

“When my family came to the UK in the 1960s, they brought with them steel tiffins which they would use to pack their lunch or dinner in when they went to work in the factories and foundries of post-war northern England.

“Indeed, we still have my dad’s tiffin which demonstrates the longevity of this product.”

The 48-year-old has invested in the tiffin boxes for his Shipley-based restaurant, many of which are sourced directly from India. He received a tremendous response from his customers.

Those who buy a tiffin box will receive a 10% discount on their takeaway order.

Customers can also bring back the containers every time they come in for a takeaway.

Mr Khinda founded the Indian restaurant in 2008. He stated that he has seen the popularity of Indian cuisine soar over time. He is positive that the new tiffin concept will add more depth to its appeal.

“Indian food is massive in the UK and its popularity never seems to decline.”

“Packaging this amazing cuisine using street food methods has helped to re-brand and re-package Indian food in a totally new and refreshing way, which will keep this cuisine at the forefront of dining out scene in the UK.”

Following the introduction of his tiffin boxes, Mr Khinda hopes that it will inspire other restaurants, which will go a long way in reducing the daily use of plastic.

Dhiren is a journalism graduate with a passion for gaming, watching films and sports. He also enjoys cooking from time to time. His motto is to “Live life one day at a time.”
Indian Police Head kills Wife & her Family Members with AK-47
Pakistani Wife shoots Husband for Sexually Abusing Daughter