Indian Students made to wear Boxes on Heads for Exams

A group of Indian students were made to wear cardboard boxes on their heads for their exams. The incident happened in Karnataka.

"they (students) cannot be made to wear cartons"

In a strange but true incident, around 50 Indian students at a pre-university college in Haveri, Karnataka were made to wear boxes on their heads.

Their heads were covered by cardboard boxes as they wrote their exams.

On Saturday, October 19, 2019, an official said that the college took the step as they were concerned about the possibility of cheating.

The incident has caused controversy, with some calling it inhumane. Officials demanded an explanation from the college.

“A notice has been issued to Bhagat Pre-University College seeking an explanation for forcing its students to wear cardboard boxes while writing exams to prevent them from copying [from each other].”

The incident took place on October 16, 2019, and has been described as shocking.

It came to light after a video circulated on social media. It showed the students writing their exams while wearing boxes on their heads.

The college took measures to prevent students from copying each other.

The Indian students had been in their classroom, taking their economics and chemistry exams as part of their mid-term tests.

Despite the college’s reasons, the official said:

“Whatever be the purpose, they (students) cannot be made to wear cartons for writing exams. There is no rule or advice from us.”

While the students had boxes on their heads, the front was cut out so that the students could see and breathe.

However, the boxes prevented them from looking on either side, avoiding the possibility of looking at the answer sheets of other students who were sitting nearby. 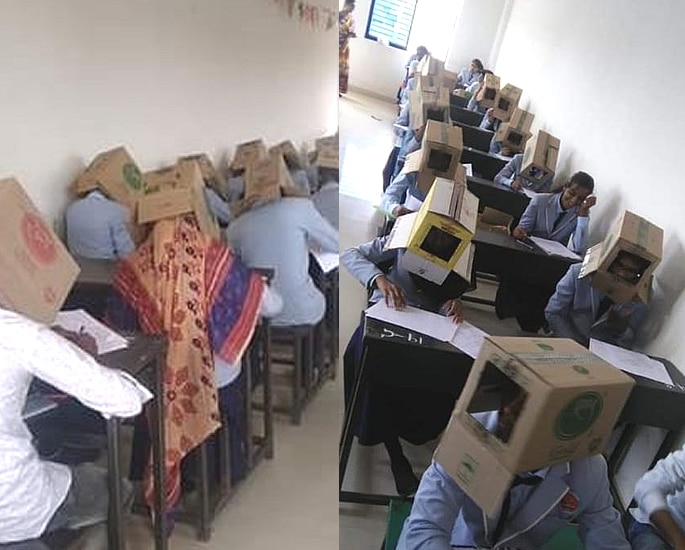 Karnataka Education Minister S Suresh Kumar came across the incident and said that action will be taken.

“Nobody has any right to treat anybody more so students like animals. This perversion will be dealt with aptly.”

The head of the college MB Satish defended their actions by explaining that a college in Bihar did a similar thing in an attempt to crack down on cheating which was praised on social media.

He said: “We tried to see how it works as a trial and told the students in advance that boxes would be given to each of them to wear before writing the exam.”

He added that it was on an experimental basis and that students were not forced to wear the boxes.

“There was no compulsion of any kind. You can see in the photograph that some students were not wearing it.”

“Some who wore it removed it after 15 minutes, some after 20 minutes and we ourselves asked them to remove it after one hour.”

Dhiren is a journalism graduate with a passion for gaming, watching films and sports. He also enjoys cooking from time to time. His motto is to “Live life one day at a time.”
British Pakistani Woman creates Ruckus on PIA Flight
Teenager’s Hand Chopped with Axe in Road Rage attack