Raj Kumar Vaishya is an Indian man who has achieved the unthinkable. The inspiring grandfather has passed his Masters exams in Economics at the age of 97!

Raj Kumar Vaishya of Bareilly in Uttar Pradesh has achieved an incredible feat. He has successfully passed his final exams to gain a Masters in Economics. If that wasn’t impressive enough, Raj also happens to be 97-years-old!

The ambitious grandfather gained the postgraduate degree from Nalanda Open University (NOU) in Patna after enrolling for the course in 2015. At the time, he was recognised by the Limca Book of Records as the oldest man to do so.

Speaking to Indian press, Vaishya admits that his choice to do a Masters was to fulfil a “long-nurtured desire”.

Born in 1920, Vaishya originally graduated from Agra University in 1938 and gained his LLB in 1940. While at the time he wished to continue with his studies, he had to give this up because of “increasing family responsibilities”.

Vaishya eventually retired from a private firm in Jharkhand in 1980 where he had worked for over 30 years. Decades later, however, Vaishya decided to take another, decidedly more daunting step, and go back to school. His reason?

“To get a Masters degree and to study economics to be able to understand why India has failed to solve problems like poverty,” Vaishya tells Indian press.

Now, the 97-year-old has attained a second division Masters in Economics. But the journey wasn’t without its challenges.

Vaishya was keen to admit that he occasionally struggled with student life: “It was really difficult for me to wake up early to prepare for the exams,” he says.

Over the course of his degree, the 97-year-old sat two 3-hour exams in total alongside other students. He reportedly wrote in English and used “nearly two dozen sheets” in each exam!

Speaking about his accomplishment, Vaishya said:

“Finally, I have fulfilled my long cherished dream. Now I am a postgraduate. I decided to prove two years ago that even at this age, one can fulfil their dreams and achieve anything. I am an example.”

It is clear that the 97-year-old is a prime example of no challenge being too difficult to overcome. This is a mantra that Vaishya believes is key for young people to understand. The postgraduate added:

“I want to tell them [young people] not to get upset and depressed. ‘Mauka aur avsar har wakt rehta hai, kewal khud pe vishwas hona chahiye’ (There will always be opportunities for those who believe in themselves).” 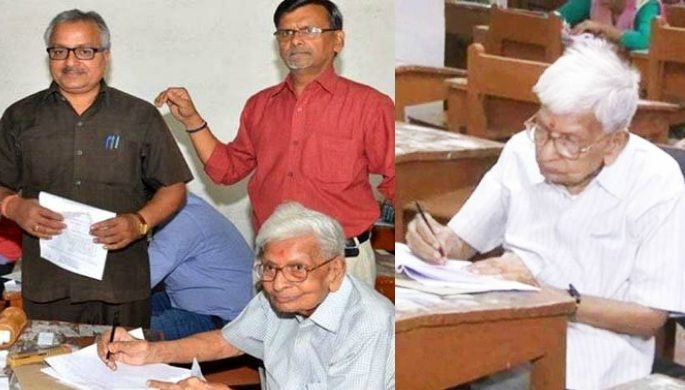 Undoubtedly, Vaishya is a remarkable role model for all of us. Postgraduate degrees are always a challenging pursuit. While some choose to take a break and explore other pursuits after undergrad, Vaishya proves that there is no time limit on going back to school.

Vaishya insists that much of his success was due to his daughter-in-law’s support: “I thank my daughter-in-law Prof Bharti S Kumar, former head of history of Patna University, for regularly standing by my side.

“She even discontinued watching the serials and movies of her choice on television just to keep me undisturbed,” he said.

Unsurprisingly, Vaishya’s exam results have also been celebrated by NOU. University Registrar SP Sinha had many praises for Raj Kumar Vaishya, declaring him an inspiration for other students: “His zeal and dedication to pursue education is worthy of emulation by one and all.”

Sinha added that Vaishya behaved like an ordinary student, keen to do well and “never sought or got any special privilege on the ground of his advanced age”.

Following his fantastic achievement, Raj Kumar Vaishya hopes to continue writing about socio-economic issues including poverty and unemployment in India. He has confirmed that he does not wish to do a PhD:

“The idea was not to get a degree but to study economics. There are many PhD students who have superfluous knowledge,” he said.

DESIblitz would like to congratulate Raj Kumar Vaishya on his fantastic achievement and for teaching us that there is no age-limit on realising your dreams!