A teenager had his hand severed by a man who wielded an axe. The incident, which took place in Rochdale, stemmed from a road rage attack.

"The blow itself was aimed at the victim's head."

A group of men have been jailed following an “appalling” attack in which a teenager had his hand chopped with an axe after a road rage row.

The incident happened on Church Road, Rochdale, on October 17, 2017.

The tree surgeon, then aged 18, was one of four workmates attacked by the gang of 20 armed men.

They had been led by 27-year-old Habibur Rahman, who called the victims “white b******s” who were in his “country”.

One person, Mohammed Awais Sajid, known as ‘Skinny’, came armed with an axe. Others carried knives, machetes, a clawhammer and a knuckleduster.

The prosecutor Tim Storrie said: “He followed up with a 360 degree spin of his arm, an act which was doubtless employed to enhance the speed and devastation of the attack.

“The blow itself was aimed at the victim’s head.

“He was dimly aware at this stage of the weeping of blood down into his waistband.

“He was turning his body, attempting to leave the scene.

“Through good fortune, he said he realised the axe was above him aiming for his head. He put his arm up to defend himself and the blade essentially severed his arm at the wrist.”

The victim was airlifted to hospital and underwent life-saving surgery.

His hand was partially reattached but he has needed another five surgeries in two years. The victim will only get 60% use from his arm and is still mentally scarred by the attack.

Sajid, of Rochdale, was jailed for 18 years. In an earlier trial, he was acquitted of attempted murder.

As Sajid was led away, a man shouted “f***ing injustice!” and “police set up”. Meanwhile, a woman left in tears.

Rahman was jailed for four-and-a-half years for assault after punched another tree surgeon in the face with a knuckleduster, breaking his nose.

His brother Zillur Rahman, aged 29, received a three-year sentence after he admitted making phone calls to summon the gang.

Arsan Ali, aged 23, was jailed for four years after being found guilty of conspiracy to commit violent disorder. 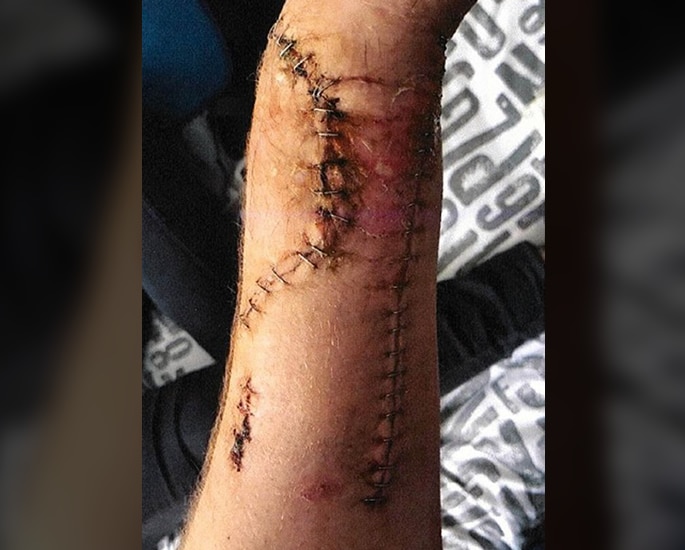 Judge John Potter explained that the incident happened at around 4 pm when Habibur “took offence” at an elderly woman’s driving.

“You shouted abuse at her and two tree surgeons passing by intervened.

“A scuffle took place between Habibur Rahman and one of the tree surgeons.”

Rahman decided to take action after he felt he had been “disrespected” on his “territory”.

The tree surgeons were located at a property they were working on nearby. They were confronted by Rahman and a group that grew in number.

“Habibur Rahman’s first action was to prevent the men from leaving.

“As the workforce attempted to pack up their tools to leave the scene, he drove his car, a Vauxhall Zafira across the entry.

“The workmen found they were trapped and could not leave. The street where they had been working had become a battleground.”

“And Habibur Rahman and his crew of supporters were beyond any kind of rational discussion.”

Rahman threatened them from his car: “I am not going to let them leave.

Rahman alleged that he was racially threatened by the tree surgeons during his interview but Judge Potter called it a “pack of lies”.

He said: “The fact that a mob could be mobilised so quickly and so heavily-armed is clear evidence in my judgement that you are each associated with gang activity.”

Sajid arrived as the violence started and launched a “devastating attack” on the youngest tree surgeon.

Mr Storrie explained: “Sajid arrived by car, halting to get out and stride towards the confrontation; he had secreted his weapon down the waistband of his trousers; he removed it and, without the slightest hesitation or inquiry, in his first blow, he struck out at the chest wall of [the victim].”

He then did a “360-degree swing” which severed the victim’s hand.

Judge Potter said that the teenager was a peacemaker in the road rage incident and was “completely defenceless” when he was attacked.

“You committed an appalling act of violence and took concerted efforts to conceal what you had done.”

The attack came to an end when one of the victims picked up a chainsaw and revved it in an attempt to scare them away.

One victim was able to call emergency services after fleeing to a nearby care home.

An investigation was launched under the name Operation Beehive.

Raids were conducted in January 2018 and it led to 12 arrests including Habibur and Sajid. Nine others were later released without charge.

Judge Potter said the group did not show “a shred of remorse”, refusing to give evidence during two trials.

He said that the incident has had a “profound effect” on the four victims, concluding:

“Each struggles with the memory of the scenes of violence they were subjected to.”

Manchester Evening News reported that the police have not released a picture of Mohammed Awais Sajid.