"I love doing films that are entertaining, and that the audience are going to watch and enjoy."

Rather than a follow on story to the original, Aa Gaye Munde UK De has a fresh new plot. In an exclusive Gupshup with DESIblitz, Neeru explains:

“It’s the same characters but it’s a new story. Jimmy’s character, Roop, is the same. My character is the same only my name is different. Om Puri is a new addition to the film.” 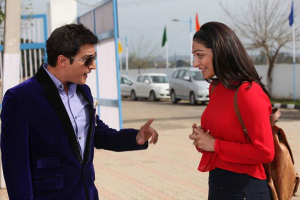 The film sees Punjabi mundah Roop (played by the loveable Jimmy Shergill) who falls head over heels in love with Disha (played by Neeru Bajwa). But Disha’s father Dilip Singh (played by Om Puri) has other ideas for his daughter’s ideal match.

Dilip believes that only an NRI is deserving of Disha, and Roop is forced to hide his identity and become the perfect British-born suitor.

Will Roop be able to pull the plan off, or will his real Punjabi roots shine through?

Speaking about her character in the film, Neeru tells us: “Disha was a super fun character to play. The film has lots of romance and great music. She’s a quintessential film heroine which I love.”

The film promises great Punjabi comedy, especially with Gurpreet Ghuggi who is one of Punjab’s most popular stand-up comedians. The friendship between him and the hero is great on-screen, and will have audiences rolling in their seats.

Canadian actress, Neeru has a growing list of Indian cinema in her filmography. From her first Bollywood film in 1998 with Dev Anand in Main Solah Baras Ki. She then took a considerable break from acting and later came back to the big screen after making her Punjabi cinema debut in 2004 with Asa Nu Maan Watna Da. 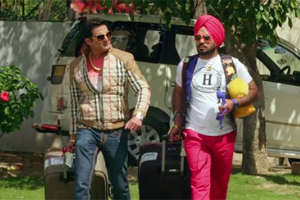 The actress has worked with a number of high profile Punjabi heroes including Jimmy Shergill, Amrinder Gill, Gippy Grewal, and Diljit Dosanjh.

Jimmy, who is well known for his role in Aditya Chopra’s Mohabbatein (2000) with Amitabh Bachchan, Shahrukh Khan and Uday Chopra, has worked simultaneously in both Hindi and Punjabi cinema.

Neeru admits that she loved the opportunity to work with Jimmy again: “Yes it was awesome. It was easier because we had worked together before. Last time I worked with him was five years ago,” Neeru says.

According to Neeru, it took 5 years for Manmohan Singh to make the sequel after the success of Munde UK De. The film started the long wave of Punjabi romantic comedy films that emerged in Punjabi cinema, and Manmohan was keen to make sure his next film would be a good one:

“We had a lot more freedom from the director to be as romantic as we wanted. It was more comfortable. This time the scale and canvas of the film was much bigger as well to be even more romantic.”

It was Manmohan’s direction that encouraged Neeru to take on the film, and she took a lot of guidance from the celebrated director during the shooting process.

Although the UK features in the film title, the movie was not shot there. The film was primarily shot in Punjab and Chandigarh, offering a realistic account of this Desi comedy. Neeru adds that romantic comedies are one of her favourite genres of cinema – simply for the entertainment factor it provides for viewers:

“I think with any film it’s the feel good factor. I love doing films that are entertaining, and that the audience are going to watch and enjoy it 100 per cent,” Neeru tells us.

Composer, Jatendar Singh offers a great soundtrack of classic melodies and catchy Punjabi songs, that are sure to be summer anthems. ‘Tere Hi Naal’ is an instant classic in the voice of Kamal Khan.

Mohit Chauhan and Sunidhi Chauhan join their vocals with the melodious ‘Tere Faasle’ with lyrics by Kumaar, and ‘Pasand Apni’ is an upbeat bhangra track by Roshan Prince and Gulrez Akhtar.

Aisha is an editor and a creative writer. Her passions include music, theatre, art and reading. Her motto is “Life is too short, so eat dessert first!”
Happy New Year Trailer releases on WhatsApp
Ajay Devgn plays Cop in Singham Returns