The Stigma Around Breastfeeding in Public for Desi Women

Is it okay for Desi women to breastfeed in public? or are breasts only for sexual pleasure? Here we explore people’s opinions on the matter

"They made it a stigma just like they did with period"

Breastfeeding in public is not the taboo as it is deemed to be by many South Asian people, who still feel very uncomfortable with the idea of it.

Desi women nursing are regularly given the side-eye by fellow Desi men. From which they experience harassment, feel shame and are often made to leave public places.

Research has highlighted that breastfeeding could annually save 8,23,000 children and 20,000 mothers’ lives. This shows how vital it is not be denied this basic right.

Unfortunately, this simple and necessary act of motherly attention to a hungry child is surrounded by a misogynistic view.

There are many reasons behind why it happens, some people say there is a cultural taboo concerning breastfeeding. Others believe the act itself is sexualised.

The adopting of western attitudes and attire has made women more subjected to this type of thinking.

Interestingly, for most South Asian communities, there was not any stigma around nursing publicly in the 80s and 90s. Globalisation has in fact changed that.

Many Desi women have tried to break the taboo but it has yet to become the norm.

Breastfeeding in public is still a stigma as many people see breasts as sexual objects only. Therefore, they believe the act should be carried out privately. We analyse two controversial views contributing to this debate. 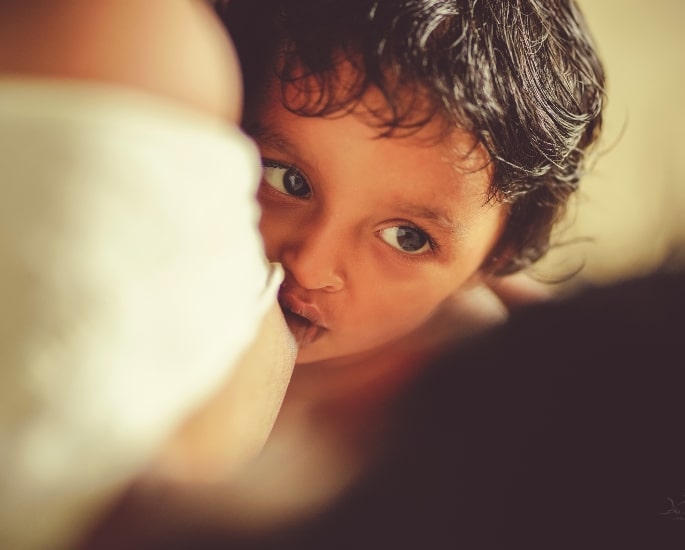 It has been argued that the first thing heterosexual men think of after hearing the word “breast” is sex.

In fact, most of the time breasts are portrayed in the media for being sexual and provocative, rather than maternal.

They are displayed everywhere, from the internet to films, television, magazines, and billboards.

It is possible to find endless images portraying breasts online. One only needs to read a handful of online comments underneath these pictures to realise how sexualised they are.

Sex sells, that is why this body part has been objectified. Their appeal is used in advertising and to sell different products.

While breasts do naturally contribute to sexual pleasure, their true biological purpose is to nurture a baby and there is nothing sexual about that.

Therefore, many still associate the act of breastfeeding in public as being indecent or even obscene.

Despite breasts being displayed everywhere, women are also told to hide them. Either being sometimes judged for showing too much cleavage or told to cover up while feeding an infant.

It is a twisted love-hate relationship, one which is quite complicated to describe. What is evident is that the sexualisation of breasts is more cultural than biological.

Moreover, many Desi people need to realise that a woman does not breastfeed in public to attract male attention or to flaunt her body in any way. 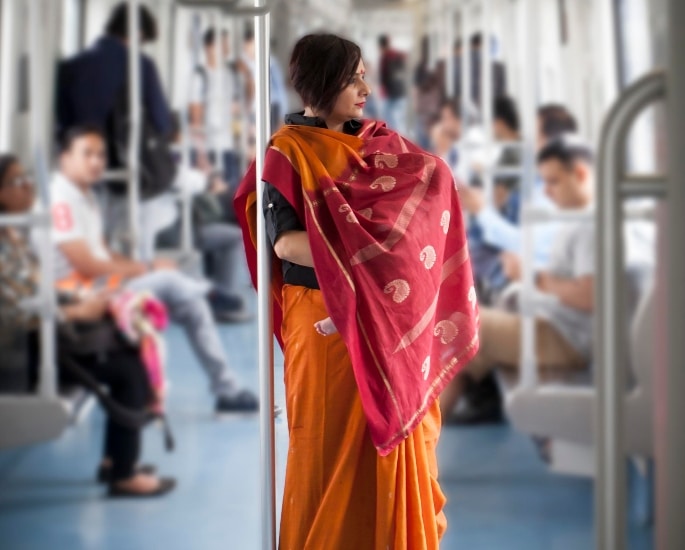 A lot of people believe it is fine to nourish the baby in public as long as it’s done discreetly. But what do they mean with that? are they confusing breastfeeding with sex?

According to their point of view, the mother should cover her breasts or go to do so in an isolated place. In society, it is common to wear low cut tops, which might show breast skin.

How come is it a problem when the same amount of skin is showing while breastfeeding?

The message sent to people is that breastfeeding is a dirty secret that should be hidden.

Recently some places have started creating different rooms only for this purpose.

Most mothers have realised that when a baby starts crying out of hunger it is not easy to search and reach those places.

Many argued that even trying to cover the baby while it is feeding is not easy as the infant will move a lot.

It is suggested by most health authorities to breastfeed for at least six months.

Continued breastfeeding is then recommended for at least one year, as the baby is introduced to different foods.

This could be a long time of struggles for a mother that wants to do so. The harassment received from people topped by the cries of the baby usually tend to create a sense of discomfort.

To understand better the different views, DESIblitz went around and spoke about the topic with fellow Desi people. 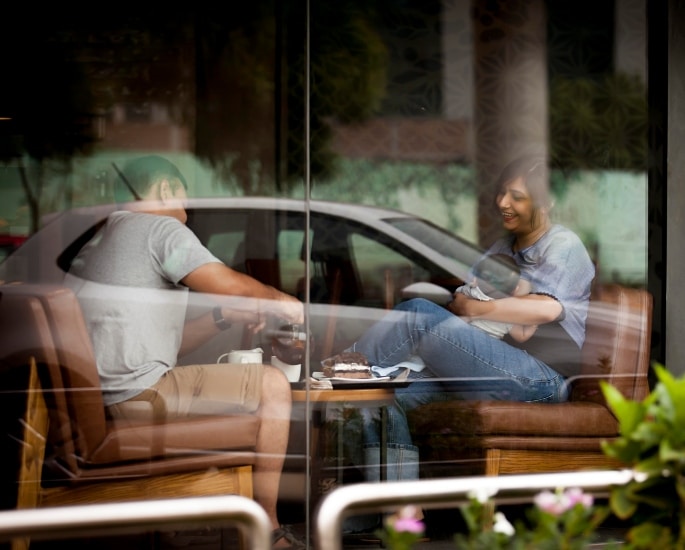 “My guess? most people are much more comfortable with the idea of breasts as objects of sexual pleasure than they are with the practice of breasts being used to feed babies.

“It could be as simple as a lack of exposure to breastfeeding women from childhood on, mixed with the sexual objectification of breasts that has dominated media since at least the middle of the last century.

“I think they are simply more familiar with, and therefore feel less threatened by, breasts as objects of sexual pleasure.”

“Of course it’s acceptable, why would it not be. It’s not like they are doing anything wrong, plus why is it acceptable if a man walks around with his shirt off but if a woman breastfeeds in public is a shame.

“It’s something that has been like that for ages, they made it a stigma just like they did with period.”

Atharvagiri, aged 22, said it’s all about the baby’s need. He says:

“People that don’t like that can always ignore and look the other way.”

Varun, aged 43 also spoke positively about it. He says:

“I think it’s normal for women to do that. No one should doubt it, it’s a normal thing. A mother should and needs to be able to feed the baby anywhere.

“I think it’s a taboo topic especially in some communities like the Asian community but I think the way to go forward is to just do it and just not care about what other people think and it will become normalised over time.

“They are a bit more reserved in their dress code and in their way of thinking, so that’s kind of mixed into that.”

Despite many supporting the idea of women breastfeeding in public, some people had a different view on it.

Mohammed believes it’s not ideal to do it in public. He claims:

“They could pump it in a bottle beforehand and just feed it when the baby needs it.”

Amina would instead feel shy, she says:

“I think I’d act shy in that situation, I just wouldn’t know how to act. It’s a hard situation to have a view on.

“It’s how we are brought up. In society, nudity is not allowed. That area of the body is sexualised. I know it would be normal if a man took off his shirt, but if he took off his trousers it’d be a problem.

“They should make certain areas where women could go and breastfeed privately.” 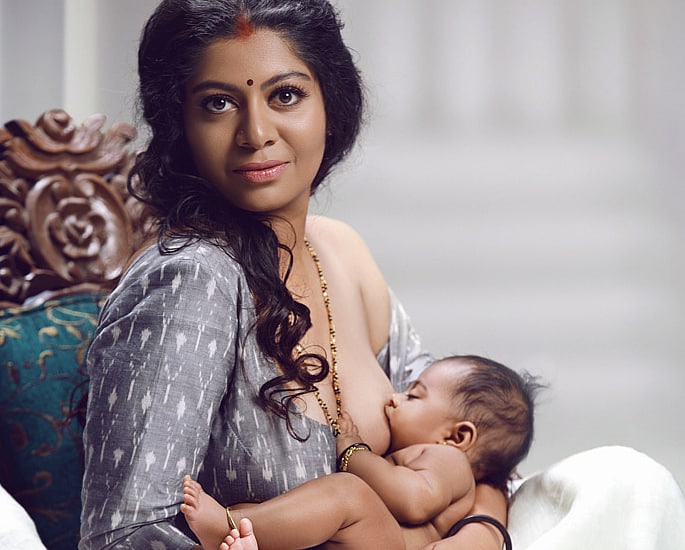 In March 2018 a popular Malayalam magazine named Grihalakshmi was judged heavily for portraying on the cover a mother breastfeeding.

Model Gilu Joseph said, “please stop staring, we need to breastfeed”. The image was a part of a campaign called “Breastfeed Freely”, which aims to stop shaming women breastfeeding in public.

This proves that to change people’s perspective a lot needs to still be done. Despite that, many women have started fighting for the normalisation of breastfeeding in public.