The Incredible Story of Asha Bhosle

From humble beginnings to stardom, India’s beloved playback singer, Asha Bhosle, has lived a life fit for a Bollywood movie.

"My whole education was watching actors and singers perform.”

Asha Bhosle is a famed Bollywood star known for her incredible playback singing career, spanning more than half a century.

She is also the most recorded artist in history accoring to Guinness World of Records.

Bhosle is also known as an entrepreneur, as well as starting her YouTube channel in May 2020 to beat the lockdown blues.

Asha Bhosle wasn’t always considered one of the greatest and respected artists. In fact, she was often hidden in the background behind less respected roles of vamps and vixens.

Despite this, throughout her career, she had powered through to being one of Bollywood’s most prolific playback singers, equal to her honoured sister, the infamous Lata Mangeshkar.

We explore the incredible life of the phenomenal vocalist Asha Bhosle. 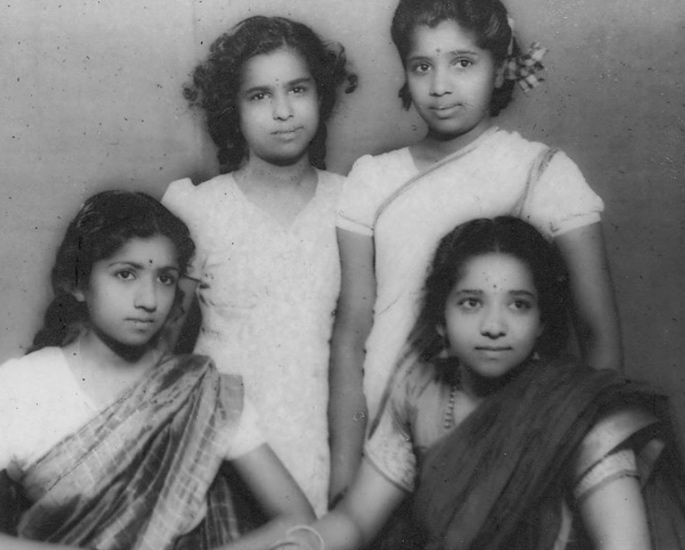 Asha Bhosle was born on September 8, 1933, in Sangli. She was the middle child of Master Deenanath Mangeshkar, one of the great musical performers and Natya Sangeet musicians.

Lata, as the oldest sibling, had the most responsibility and took care of her siblings. She was the only child of the family to go to school, as their father could only afford one of the children to study.

Asha was close to Lata and would be carried around by her everywhere. Their closeness led to Lata being pulled out of school.

This is because she tried to bring Asha with her, but the teacher didn’t allow both pupils to be taught for the price of one tuition.

Master Deenanath, upon finding his crying, scolded children, insisted they stay at home away from teachers that would make them cry. A scholarly father, he had his children taught at home.

It was this that exposed Asha and Lata to music and their training. As Asha told the Guardian:

“My whole education was watching actors and singers perform.”

This upbringing led to not only Asha and Lata’s future success, but also their sisters’ Usha and Meena’s careers in playback singing. Their brother, Hridaynath, also went onto become a music director.

When Master Deenanath died in 1942, the family were struck with financial trouble. At the suggestion of a family friend, actor and director Master Vinayak, they moved to Kolhapur.

Master Vinayak who had begun working in films to earn a living, eventually became a mentor to Asha and Lata.

At the tender age of eleven, Asha began working with her song ‘Chala Chala Nav Bala’ for Majha Bal in 1943. 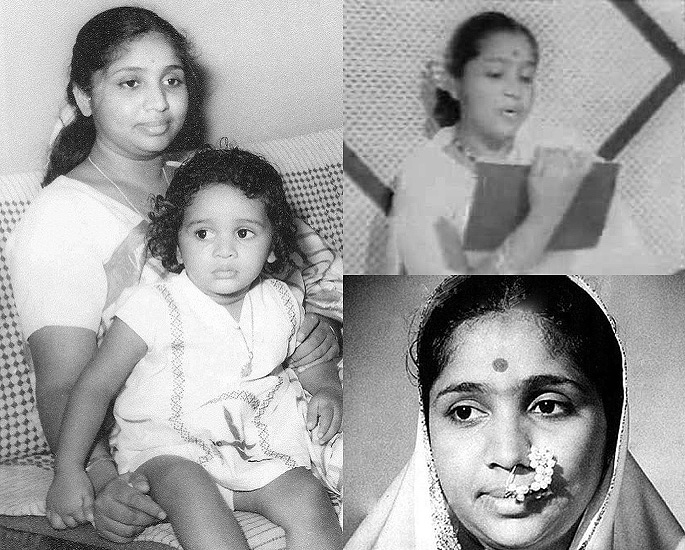 Though Asha and Lata had been close, their relationship wasn’t always harmonic. At the age of sixteen, Asha married Lata’s secretary, 31-year-old Ganpatrao Bhosle.

The union led to Asha’s disownment from her sister and family, which only rekindled following the birth of her first child, Hemant.

The marriage to Ganpatrao, however, remained rocky, as he was relying on her financially. He pushed Asha’s career in music with a focus only on the money, in spite of her taking care of their children.

Ganpatrao also resented Lata’s success. Lata was firmly in the spotlight as one of the best playback stars.

But Ganpatrao felt she was taking the work Asha should have had. He would often try to keep the sisters apart in his greed. Asha’s daughter, Varsha, remembered:

“The earliest memory I have of my mother… is a sobbing woman hugging me back to sleep, the strains of strange, repetitive singing emanating from behind a closed door.

“I am roughly pulled away by a man when the music threatens to cease.”

“Later, I learned that that was a routine day in the life of my father: guarding [her] against all impediment which may have prevented her from singing for their supper.”

Ganpatrao, who was abusive and violent to his wife, separated from her in 1960. She was left with little else but her three children.

Despite the setback, she was soon making a path for herself in music – with or without her husband. 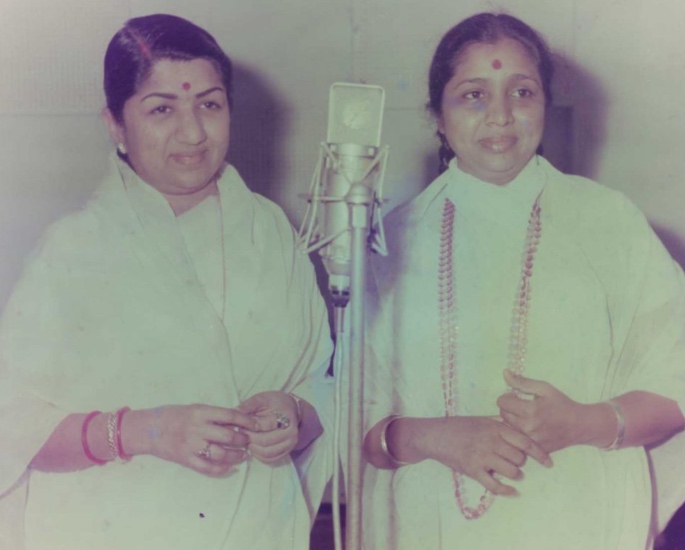 Asha Bhosle seemed to be a step behind her sister Lata, known as the ‘Nightingale of Bollywood’, in terms of playback roles. Even though both recorded over 10,000 songs, they were down different paths of success.

Asha was often typecast as the vocalist for bad girls. Songs were passed down to her by other stars who had dismissed the tracks and roles – including Lata, who was an established, popular singer.

Asha also would sing for low budget movies, never quite reaching the heights of fame she managed to get to years later.

Despite the assumed competition between the sisters, Bhosle denied they were rivals. Speaking to India Today, she said:

“We have kept our professions separate from family life. It was a healthy competition. I always wanted to do better, that zid has made me what I am today.” 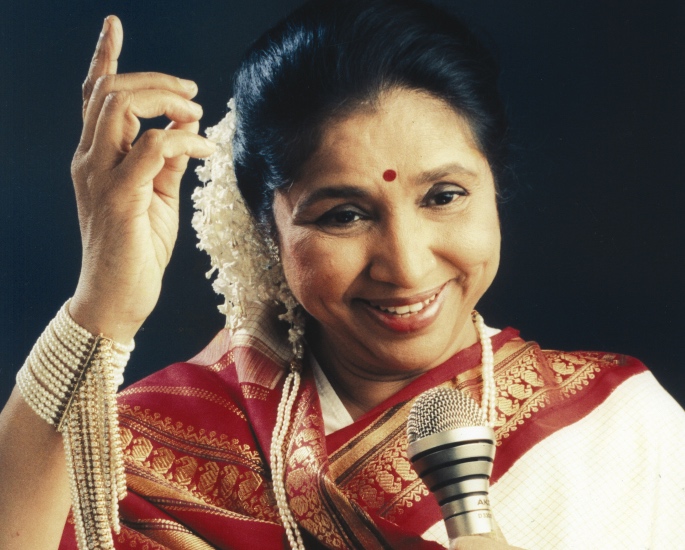 Even though Asha Bhosle’s romance had crumbled, her career had kicked off.

Asha had also begun her long-term collaboration with OP Nayyar for CID in 1956. Working with him led her to more versatile roles. Asha explained to the Hindustan Times:

“There were three turning points [in my career]. After doing ordinary work for many years, there came Naya Daur and I started getting the heroine’s songs.

Asha also worked with the notoriously strict Sajjad Hussain, known for making even the greatest singers tremble. Asha was straightforward with Hussain, telling him she needed the work for her children.

Hussain was sympathetic, and told Asha he would teach her without scolding her. This led Asha to find more strength in her voice. Consquently, Asha expanded her singing career.

With Helen still one of her favourite actresses, Asha confessed to a popular rumour on her YouTube channel:

“Do you know that famous story when I told Helen that I would have eloped with her if I were a man? That is true.” 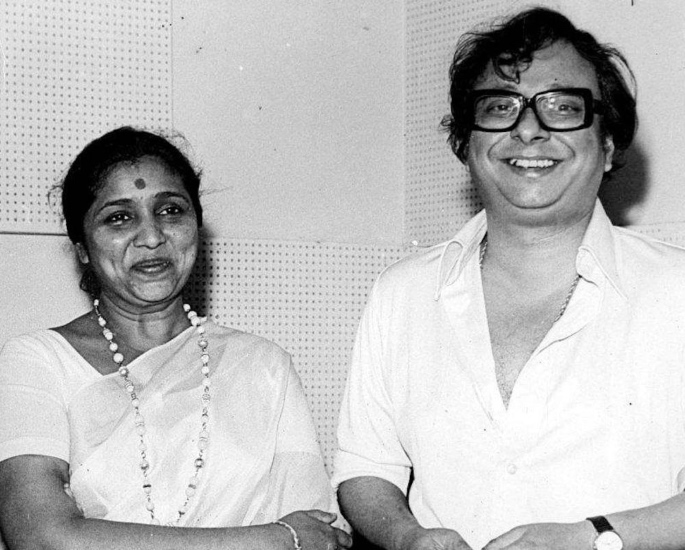 Asha Bhosle had been subject to romantic rumours, particularly in terms of her musical companions. It was stronly rumoured she had an affair with OP Nayyar. In fact, many believe she became a very big singer due to Nayyar.

However, Asha remarried in 1980 to one of her best collaborators, RD Burman. Burman, or Pancham Da as he has often been known, met Asha when he was just thirteen, six years her junior.

He was the son of SD Burman, who Asha worked with on songs such as ‘Dil Laga Ke Ladar Gayi Pyari’ from Kala Pani (1958).

Asha and RD collaborated throughout her career, with hits such as ‘Mehbooba’ from the 1975 cult classic, Sholay and ‘Tu Tu Hai Wahi’ from the 1982 film, Yeh Vaada Raha. As they got closer, Burman proposed marriage.

It took many offers of marriage for Asha to say yes. Despite being left shaken after her first marriage, she married Burman in 1980.

“I did not marry Asha; I married her voice.”

There were doubts over their relationship, including from Burman’s mother, who was displeased with the union.

However, the foundation of their marriage was built on a shared artistic passion and mutual respect.

Even from a professional capacity they worked together beautifully. Burman loved to tease Asha for her strict cleanliness, along with buying her flowers and charm bracelets with brooms on.

Unfortunately, Bhosle and Burman separated in the late eighties. Burman was struggling with his addictions to alcohol and cigarettes, leading to a heart attack.

Though they weren’t together, their feelings remained the same. Asha would visit Burman often and spend time with him. She always felt connected to him by their deep bond.

However, in 1994, Burman fell ill and was hospitalised. When he died, Asha said in a statement:

“The world has lost a great music director but I have lost my husband. The world forgets everything but it’s difficult for me to forget.”

Asha remained dedicated to her husband, caring for Burman’s mother for thirteen years after he died, in spite of the doubts that were cast on their love. 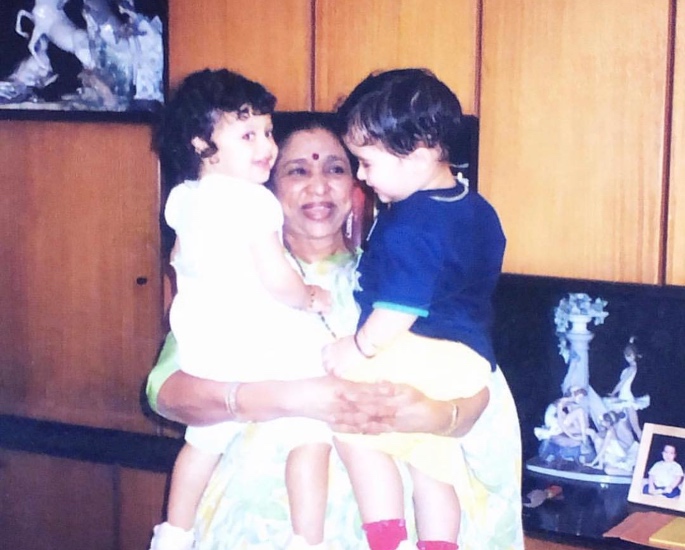 Asha Bhosle’s children were also a big part of her life. They gave her the motivation to work harder.

She pushed her career to provide for them, following Burman leaving her. She also shifted from classical music, which she was trained in, to light music so she could boost her finances.

Asha kept her three children, Varsha, Anand and Hemant, away from the Bollywood lifestyle and the film industry. Following her struggles and stresses, she wanted them to focus on their academics.

Asha was taking them to school everyday between working in the studio, managed to keep life ordinary for them.

For a while, they did not know or believe that their mother and aunt were world-famous singers.

The children grew up successful. Hemant became a commercial pilot, Varsha worked in journalism and Anand studied business and film direction. The youngest, Anand works with his mother in managing her career.

Sadly, Asha lost two of her three children in the past decade. Varsha took her life in 2012, and three years later Hemant died too.

Asha remained strong, however, using music to channel her grief and setting up the Asha Bhosle Foundation in her daughter’s honour.

To cope with her sadness, she also claims riyaaz (disciplined singing practice) has helped her. 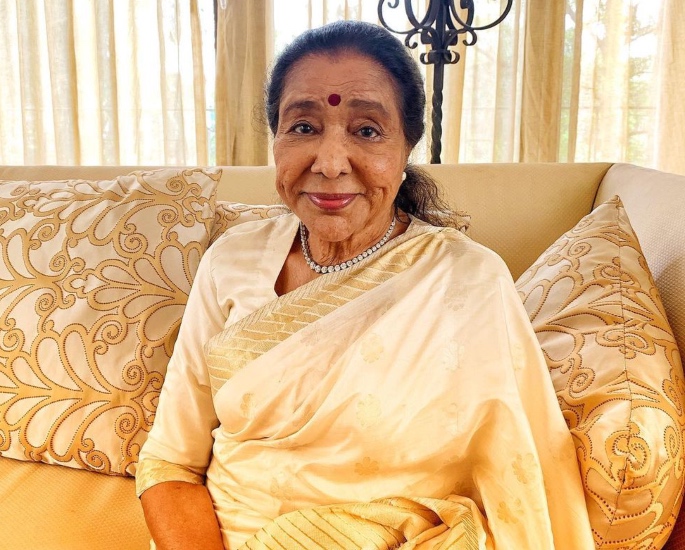 In spite of the hardships, struggles and pain in Asha Bhosle’s life, she remains a powerhouse and a prominent part of contemprary Bollywood and South Asian culture.

Though she bid the stage farewell on her final tour in 2019, Bhosle still keeps busy.

She has a new album for 2020, Bollywood Legendary Singers, Asha Bhosle, Vol. 11. She is seeking talent on her website for the Asha Bhosle Talent Show.

Asha also continues to be an entrepreneur and owner of her incredible restaurant chain, Asha’s, since 2002. Speaking to ZAWYA about her passion for food, she said:

“I loved cooking from my younger days … [and] my son, Anand, suggested the idea of a restaurant.”

Asha Bhosle has been, and still is, a woman of many talents. She has carved her own path across two centuries and hasn’t shown any signs of slowing down.

From her persistence in the playback singing business to bringing a soul to the femme fatales of Bollywood, she has carved a career that has bloomed and inspired.

Even more so, her doting motherhood and shrewd entrepreneurship have shown the balance of work and home. She is an example to every women that you can have it all.

Sharna is a Film Studies student who loves reading, horror and writing. Her motto is: "You can, you should, and if you're brave enough to start, you will."
Pakistani Woman sues Hadiqa Kiani over ‘Hair Loss’
Sona Mohapatra Fans Doubt #MeToo Claims after New Video