The History of Football in Pakistan

The World Cup is currently underway in Qatar but there are no South Asian sides. We look at the history of football in Pakistan.

Pakistan has never participated in a major event outside of South Asia.

With the World Cup currently underway, countries around the world are enjoying football festivities.

However, South Asia has once again failed to put the region on the map, with Pakistan not qualifying for the FIFA World Cup yet again.

The year 2022 isn’t Pakistan’s first attempt at qualifying for the big competition.

Despite football existing in Pakistan, the sport hasn’t solidified a position on the world stage.

Nevertheless, Pakistan’s presence in the sport is not unheard of, whether this means team involvement, or supplying the tools needed for high-profile games.

DESIblitz will look at the history of football in Pakistan from the 1950s to the present day. 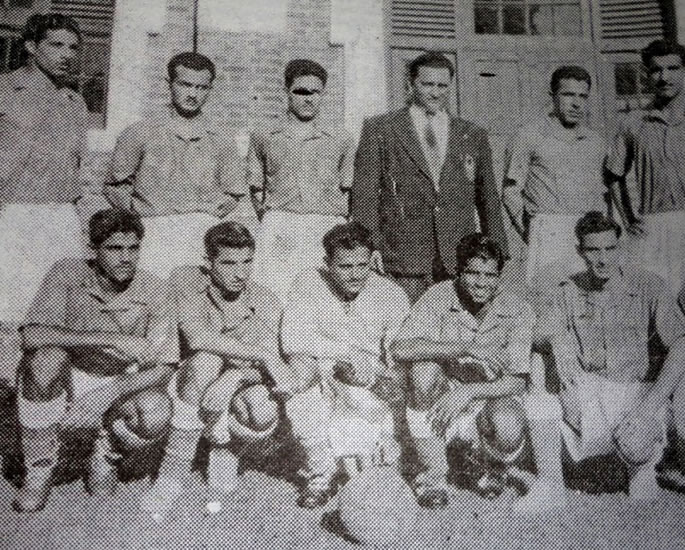 Pakistan made their international debut during a tour of Iran and Iraq in October 1950, while the inaugural National Championship was established in Karachi the same year.

For the first time, Pakistan and India played to a scoreless tie in the Colombo Cup.

Pakistan played in the Asian Games that were held in the Philippines in 1954 and in Japan in 1958.

Due to poor game organisation in the nation and irregular international involvement, the standard attained during this time could not be maintained.

Unlike India, Pakistan has never participated in a major event outside of South Asia.

India qualified for the World Cup in 1950, however, they withdrew.

Due to the dominance of cricket in Pakistan and South Asia as a whole, football never fulfilled its potential in Pakistan. 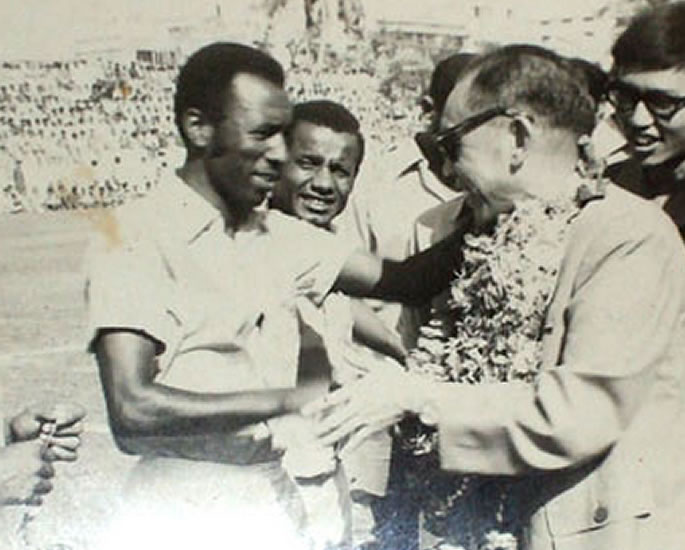 Abdul Ghafoor Majna, known as ‘Pakistani Pele’, was one of the country’s finest players.

When Pakistan’s national football team was one of the top ten teams in Asia, Ghafoor was a member of the lineup.

According to reports, he was “the last man living from the days when the Pakistan football squad was good enough to beat USSR, UAE, and China – a long cry from the situation right now”.

In 1967, Pakistan’s Asian Cup qualifying matches against Burma and Cambodia ended in losses, while their last game against India was a draw.

Due to East Pakistan being transformed into The People’s Republic of Bangladesh as a result of the 1971 Bangladesh Liberation War, the Pakistani squad was no longer permitted to use Bengali players.

Early participation by the national team in the 1970s was limited to the Asian Games in 1974, and one friendly match against South Korea in 1978.

This period’s most significant outcome was a 2-2 tie with Turkey. 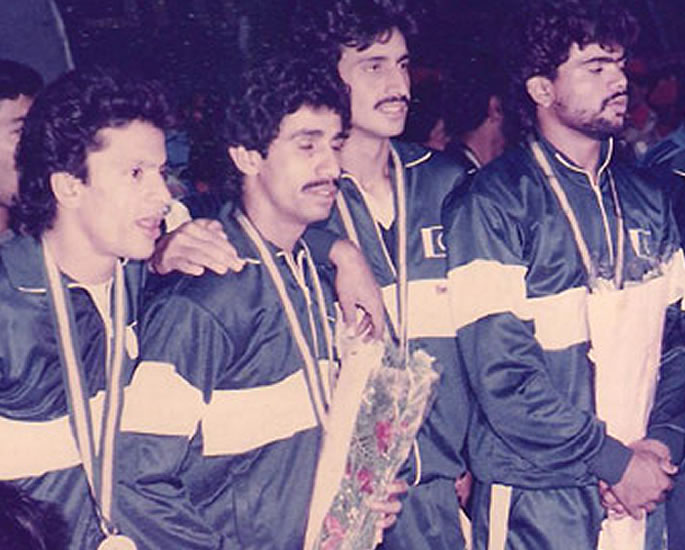 The period between the 1980s and 1990s experienced yet another decline for football in Pakistan.

Pakistan held Indonesia to a scoreless draw in the 1982 King’s Cup, the group’s first shutout since 1962.

Following a defeat to Thailand, they defeated Malaysia 3-2, and although dropping a tight match to China, they defeated Singapore 1-0 in their last match.

In 1982, Pakistan organised a friendly competition that included Iran, Bangladesh, Oman and Nepal.

After losing to Iran, they defeated Nepal 2-0.

Pakistan finished the friendly tournament as runners-up when their final game against Oman concluded in a 0-0 draw.

However, in the 1984 Asian Cup qualifying matches, the national team won just one match, with the victory coming against North Yemen.

In 1985, the national team staged a different competition and invited North Korea, Indonesia, Bangladesh and Nepal.

The team gained confidence after a scoreless draw with the North Koreans and they defeated Nepal 1-0.

They were once again runners-up, nevertheless, due to defeats in the final two matches against Bangladesh and Indonesia.

Pakistan finished fourth at the South Asian Games after falling to Nepal in a penalty shootout.

They lost every game they played at the Asian Games in 1986.

A year later, the team had additional success at the South Asian Games, defeating Bangladesh 1-0 in the bronze medal match.

They failed to advance from any Asian Cup qualifiers in 1988.

In 1989, Pakistan attempted to enter the World Cup for the first time.

But they failed to succeed in any of their qualifying games.

The national team recovered when, a few months later, they won the South Asian Games by defeating Bangladesh 1-0. 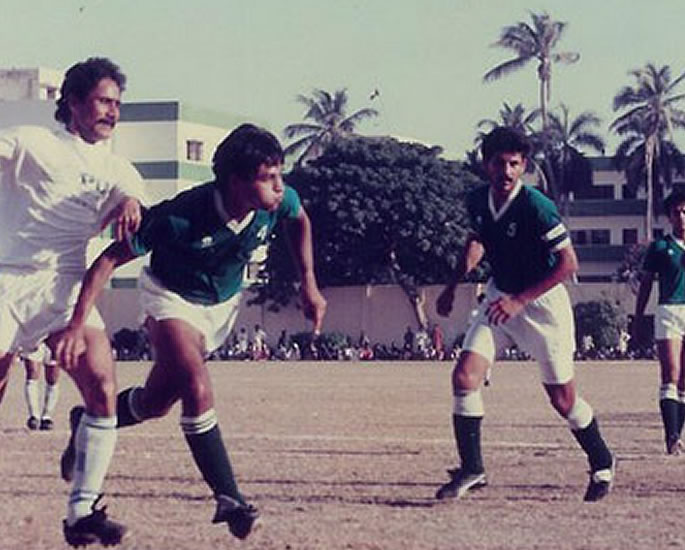 In 1990, Pakistan lost all three of its games and was eliminated early from the Asian Games once more.

Pakistan won its second Gold medal in the 1991 South Asian Games by defeating the Maldives 2-0 in the championship match.

The national squad placed fourth at the first South Asian Football Federation (SAFF) Cup later that year, however, they were unable to go past the group stage at the 1993 games.

Based on the goal difference, Pakistan was eliminated from the SAFF Cup group stage in 1995.

But in the 1997 SAFF Cup, Pakistan finished third after defeating Sri Lanka 1-0.

Pakistan placed last in their group at the 1999 SAFF Cup, and they also were unable to advance beyond the opening round of the last South Asian Games to play full internationals.

All of Pakistan’s Asian Cup qualifying matches ended in losses.

However, thanks to Gohar Zaman’s hat trick in a 3-3 draw with Sri Lanka the next year, Pakistan earned their first point in the World Cup qualifying process.

All subsequent games, however, were losses.

A four-match series against Sri Lanka that Pakistan participated in in 2002 ended in defeat.

Pakistan lost 2-1 to India in the third-place playoff in the 2003 SAFF Cup, placing them fourth overall.

Pakistan defeated Macao 3-0 later that year to win their first Asian Cup qualifying match, although they were unable to advance.

They lost to Kyrgyzstan in the World Cup qualifying matches, capping up the year with losses. 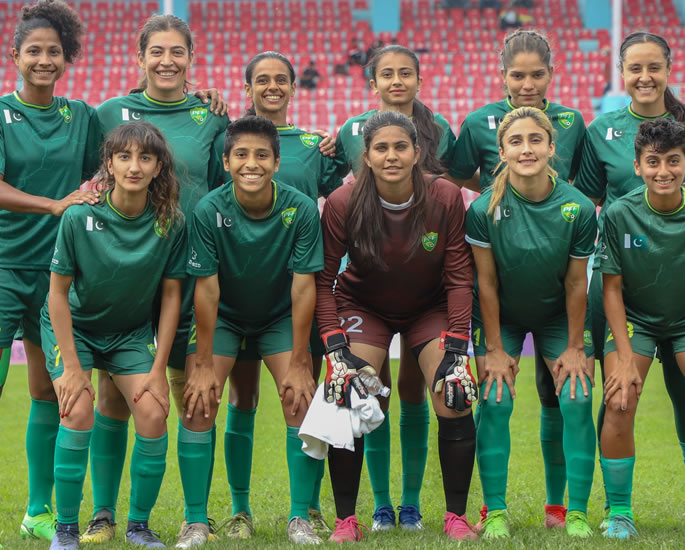 The sport took a hit for the Pakistani women’s team when the Pakistan Football Federation (PFF) was suspended by FIFA for infighting and third-party interference.

Major clubs voiced their displeasure, Mohsin Gillani WFC announced its withdrawal, while Karachi United declared that it will obey FIFA’s demands to follow due procedure wholeheartedly.

The incident caused the Normalisation Committee (NC) to lose control over the PFF’s Lahore headquarters.

There was no football action in Pakistan, and the men’s Pakistan Premier League had not yet begun.

Since the PFF group, led by Syed Ashfaq Hussain Shah, is not recognised by FIFA or the Asian Football Confederation, the Pakistani Premier League did not have any formal status or significance. 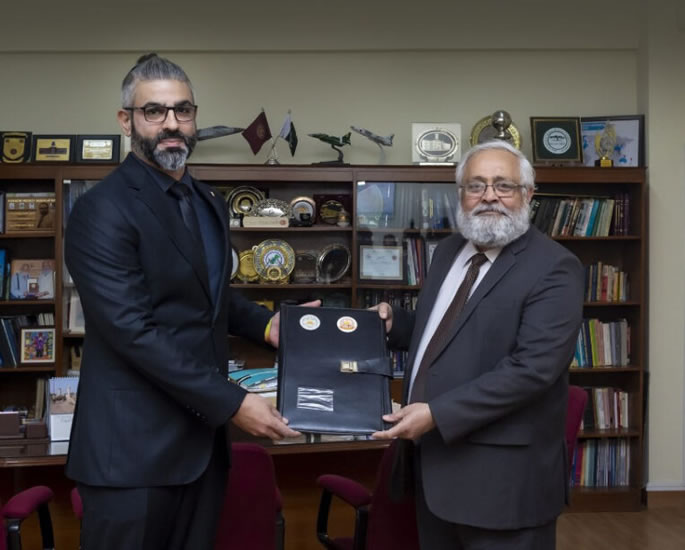 A modern “flagship” stadium was reportedly promised to be built in Karachi as part of the new enterprise.

Mike Farnan, a former managing director of Manchester United who supervised the club’s expansion as a worldwide marketing powerhouse around the turn of this century, joined the PFL as its chief operating officer.

In a tweet, Michael Owen announced his appointment as the PFL Brand Ambassador.

“Hope you all are ready! FOOTBALL HOGA!”

Pakistan will begin on a journey of developing new players and identifying potential prospects in the country’s first franchise league, with GSV CEO Zake Bhan heading the effort, and Michael Owen serving as brand ambassador. 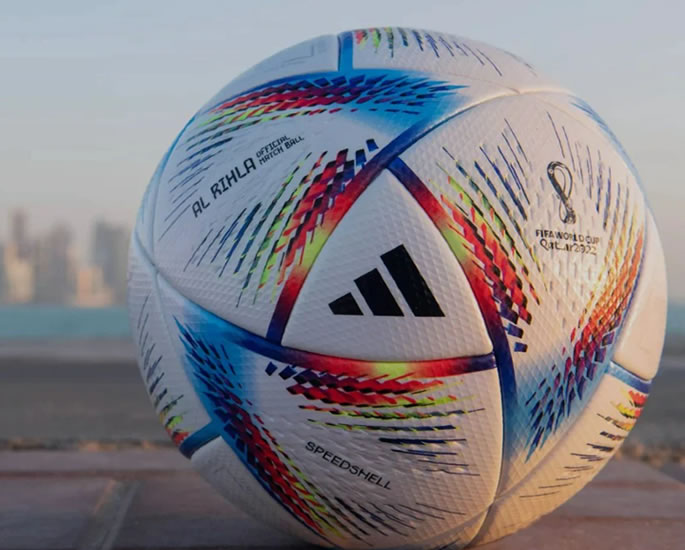 Despite not qualifying for the FIFA World Cup 2022, the country isn’t completely unaffiliated with this year’s event.

Pakistan is the nation supplying the footballs for the 2022 World Cup.

Forward Sports Company has been producing top-notch footballs for the World Cup in Sialkot for many years.

Previously, the organisation supplied the official footballs for the 2014 and 2018 World Cups.

Even though Pakistan’s national football team, which is ranked 200th out of 211 teams, isn’t competing in this World Cup, Pakistan-made footballs are flourishing in Doha.

As a footballing nation, Pakistan is nowhere near the top sides.

Although steps have been made to grow the sport, other factors such as the development of players are lacking.

Pakistan may have had some regional success in the past but they are a long way off from making it onto the international stage.

Ilsa is a digital marketeer and journalist. Her interests include politics, literature, religion and football. Her motto is “Give people their flowers whilst they’re still around to smell them.”
Hamzah Sheeraz breaks silence on Amir Khan’s Comments
Pakistan Blind Cricket Team refused Visas by India