Singer Sona Mohapatra has been subjected to online abuse from one individual. She received a death threat from the person who is a Salman Khan fan.

"I will get into your house and kill you."

Singer Sona Mohapatra has revealed she received a death threat from a Salman Khan fan after she slammed the actor.

She took to Twitter to show what was said to her. Sona took a screenshot of the threat and wrote:

“Such and such mails come my way regularly, from the followers of this ‘hero’ of bad behaviour.

“This beacon of ‘human’ values, who inspires such serial toxic behaviour, is actually claiming the title of Bharat, drawing parallels with our great nation, nothing lesser.”

In the message it read:

“Once again if you tell anything bad about Salman Khan from your bloody f***king mouth, I will get into your house and kill you. 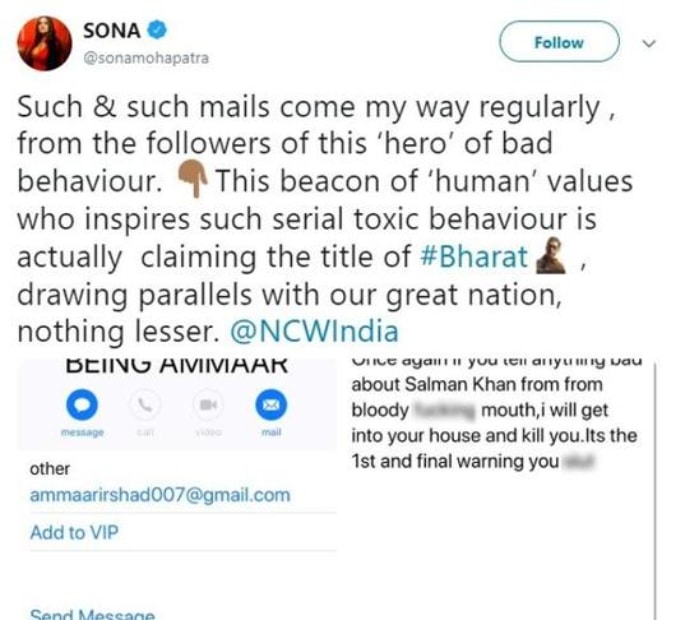 Sona criticised Salman on May 21, 2019, after he made some disparaging comments about Priyanka Chopra, who dropped out of his film Bharat on short notice to get married.

When asked if Katrina was the wrong choice to replace Priyanka, Salman had said:

“No, not a wrong choice. But initially, Priyanka was very keen to do Bharat. Ali (director Ali Abbas Zafar) and we all thought it was Katrina Kaif’s film.

“But Katrina and I did Tiger Zinda Hai just before that and Ali said that we need a girl who is Hindustani.”

He continued to complain about Priyanka’s decision to drop out of the film. He added:

“After all this, the ‘Nick story’ happened, the embarrassing thing happened and she chose to get married.”

This prompted Sona Mohapatra to come out in support of Priyanka and slammed Salman in a series of Tweets. She posted:

“Cause Priyanka Chopra has better things to do in life, real men to hang out with and more importantly, girls to inspire with her journey.”

She added: “A showcase and poster child of toxic masculinity.

“Unless we call out such serial bad behaviour, nothing changes in India.”

Salman has been promoting Bharat, which is set to release on June 5, 2019.

Dhiren is a journalism graduate with a passion for gaming, watching films and sports. He also enjoys cooking from time to time. His motto is to “Live life one day at a time.”
Arjun Kapoor opens up about Dating Malaika Arora
5 Reasons to Attend Birmingham Indian Film Festival 2019