"Our culture is diverse and rich and I want to embody that in everything I do."

Indian singer-songwriter Maharani is gearing up to take over the music industry with her thrilling multilingual projects.

Born in the Netherlands but now residing in London, England, the creative starlet has been making immense strides within the industry.

At only 21, Maharani’s unique fusion of Indian, Dutch and British culture highlights her impressive skill set and contrasting influences.

Featured several times on BBC Asian Network and more mainstream stations such as BBC Radio 1, the starlet’s talent is evident.

With her South Asian inspired EP, ‘AnBae’ released on September 6th, 2020, fans were in awe of Maharani’s multilingual flair.

Her soothing and elegant voice captures the sound of her Rnb/Hip-Hop inspirations like The Weeknd and Jhené Aiko.

However, her deep-rooted experiences in Carnatic music provide a certain Desi trance of soul and intimacy in every lyric.

Creating music independently and working with partner/producer Itsyaboikay, Maharani shows no signs of slowing down.

The young superstar is continuing to flourish within music but has also started her venture ‘Sanskriti’. A brand focused on celebrating South Asian culture and self-expression.

As her career gains more traction, DESIblitz spoke exclusively with Maharani about her intriguing sound, cultural influences and ambitions.

What makes your sound unique? 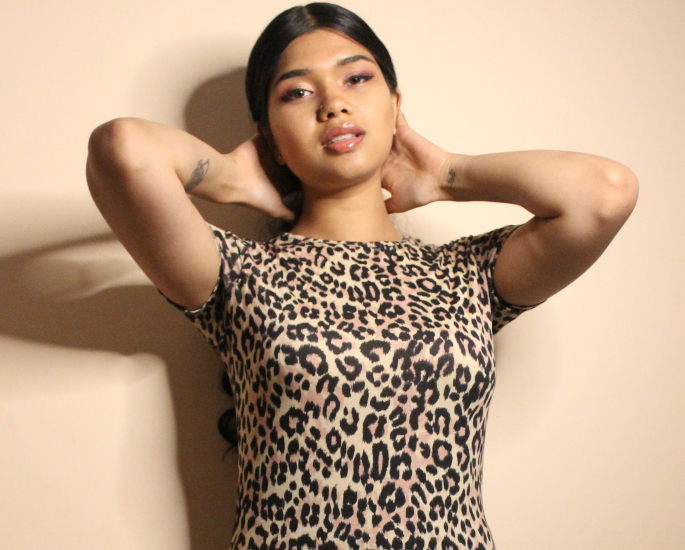 I think the best way to find out would be to listen.

But I’d say our most distinguishing feature is our blend between Trap Soul/RnB sounds and semi-classical Indian music.

I think my vocal style and runs do reflect my Indian classical training subtly, as well as of course the verses in Hindi and Tamil.

“I work closely with my partner and producer Itsyaboikay (Kay), who is also of Tamil descent.”

He has had a background in Carnatic music, specifically Carnatic violin and Mridangam.

I think that’s absolutely dope, but I think our sound is definitely more hybrid.

All in all, I think when you listen to the music, you’ll definitely hear all the different cultural influences!

What kind of Rnb/Hip-Hop influences you?

So for Kay and me, we have a lot of common influences like Jhené Aiko, The Weeknd, Tory Lanez etc.

I think the Toronto and LA/Westside sound is something we’ve gravitated towards, as well as a bit of the alternative sound you hear in some of Jhené Aiko’s older music.

Truthfully though, I am relatively new to RnB and Hip-Hop and only really got into it 2017/18.

Growing up I listened to a huge variety of music and mostly was influenced by Rock, Alt Rock, Metal.

Vocalists like Amy Lee and Hayley Williams have also inspired me a lot.

How did your interest in music begin? 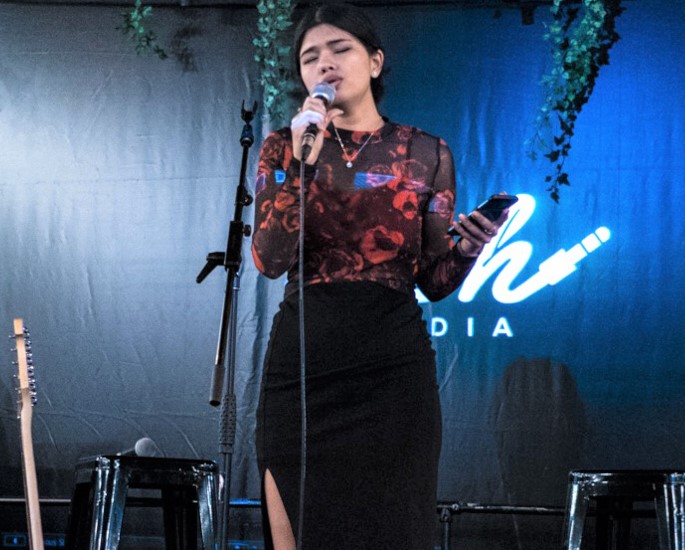 Although no one in my close family has really done music professionally, my parents have always been really into music, although, of course, Desi music.

My mum is a great singer too. She’s untrained but always been super passionate about music.

Growing up, at home we’d have tons of cassettes of Indian classical, semi-classical and old-school cinema songs etc.

“I was also really lucky to be put in Carnatic vocal and Bharatanatyam lessons.”

I was properly introduced into the world of Indian classical arts around the age of 10 and had a wonderful vocal guru, Smt Sivasakthi Sivanesan.

Aside from Indian music, I got a guitar when I was 9 and used to spend a lot of my free time teaching myself how to play songs and sing.

Honestly, I can’t remember a time when music hasn’t been a big part of my life.

The reception for ‘AnBae’ has been amazing.

I’m really blown away by the messages I get from people, from all corners of the world, saying how much they love the song.

I wasn’t sure what to expect because ‘AnBae’ is so different to anything I’d done before and it’s such a mix of everything with Tamil, English and Dutch.

But it’s been so well-received by the Tamil diaspora and people from all kinds of backgrounds. It’s been really rewarding, especially since that song is so close to my heart.

I really consider it a representation of my identity because those are the 3 languages I most connect to, as well as of course the lyrics.

Kay and I were also ecstatic when we were contacted by BBC Asian Network and had the song added to their official playlist.

We’ve had quite a few spins on their shows over the last couple of weeks for ‘Tere Bina’ too, which has been amazing.

‘AnBae’ was also featured on BBC Radio 1 and made track of the week twice.

We also released our first ever music video to ‘AnBae’ and ‘Tere Bina’ in February. So, for anyone that hasn’t checked it out yet, search ‘AnBae’ / ‘Tere Bina’ by Maharani on YouTube.

The music video was a huge project because I had a really specific vision to represent the South Asian aesthetic.

It wasn’t easy and me and my friend Darshini Nataraj, who took on the role of Art Director ended up designing and building a Desi-inspired set from scratch.

The set was literally filmed in my bedroom with all my furniture moved out. All the makeup, styling, directing and planning was all in-house too.

I think it was really worth it though because we had some really pretty visuals in the end.

Finally, the most important thing to me was repping the culture authentically.

Why release a multilingual EP? 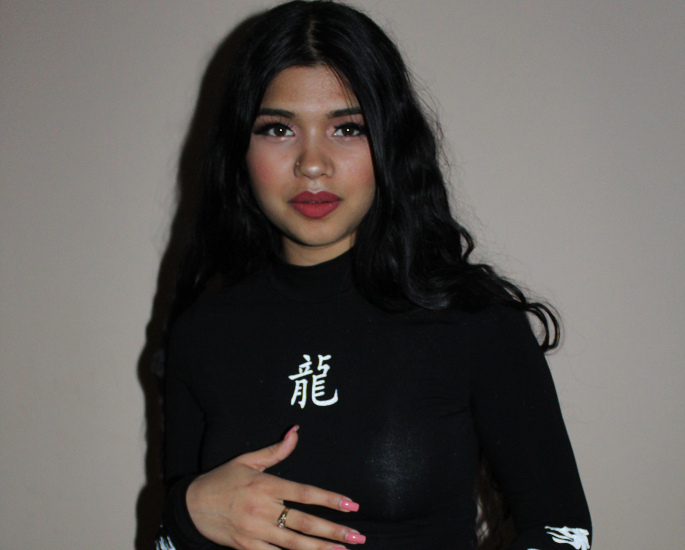 I definitely feel like my cultural influences really shaped who I am and what I stand for.

That’s why I really wanted to try my hand at writing in different languages.

I didn’t really know what I was expecting or how it would turn out but I couldn’t be happier with the result.

Music, of course, is a universal language but I really wanted to connect with more non-English speaking audiences.

As someone who’s always been really interested in languages, I feel like expressing yourself in a different language opens up a whole new dimension.

Kay is my other half when it comes to music.

We only started recording in late 2019 and figured out how to navigate this music thing together by ourselves, really.

It’s been amazing how far we’ve come and how much our work has levelled up.

I think the fact that we have such a good relationship is a catalyst for the music and is evident in the songs themselves.

But yes, Kay is an incredibly talented producer and engineer and just gets me.

He’s very hardworking and thanks to him we’ve been able to put out music with such high-quality production completely independently.

Everything that he learnt was by himself. YouTube tutorials, spending endless hours mixing my work, trying out new things, watching big producers and engineers. I’m very grateful to him.

I love classical Indian instruments, flute, mridangam, sarangi etc but I have a very soft spot for veena because I learnt it for quite a few years.

We might be incorporating it in the future but you’ll have to keep listening to find out!

As a Desi woman, have you faced any challenges in music? 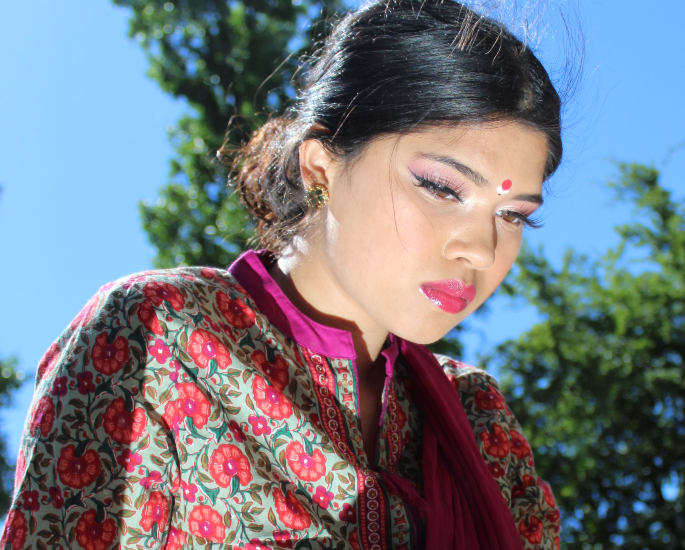 I think there’s a lot of stereotypes that as Desi’s we constantly have to break.

I’m very fortunate that my parents have always supported me so much in whatever I did. They never pushed me to do anything academically.

If anything, they encouraged me to focus on dance and music and told me not to worry too much about my grades!

Not to mention, the industry is dominated by men as well.

Navigating through these spaces isn’t always easy but I do feel like I have had a lot of support. Although, the Asian community can be very divided and fragmented.

But I think it’s easy to focus too much on the people that didn’t support you and forget all the people in the diaspora that are happy to see you there and see representation.

At times I’ve felt isolated but I think this is an easy trap to fall into mentally.

That’s why I’m trying as much as possible now to exude the type of energy I want to attract.

I want to make an open space for South Asians and the diaspora to come together and support each other.

Rather than making people believe that their community doesn’t support them.

There is a tendency to think that the Desi community is not supportive enough and is competitive but I want to change that and say, look, here’s a community of people that will support you.

The diverse identity of the diaspora need to be preserved but we definitely need more solidarity and cohesiveness.

How did your brand ‘Sanskriti’ start?

I’ve always been very interested in yoga and Ayurveda growing up.

I think it’s so important for South Asians to have a better sense of identity and to be more assertive in reclaiming our practices, traditions, customs etc.

Sanskriti literally translated means ‘refinement’ in Sanskrit and can be best understood to mean ‘culture’ as a vehicle of spiritual expression.

I wanted to create a movement and platform for South Asian pride and plan on developing this in the future.

I’ve made a playlist called ‘Cinnamon & Spice’ to support our fellow upcoming South Asian artists and hope to grow this.

I’ve also got a lot of plans in the works to develop clothing, jewellery and Ayurvedic products which I’m super excited to be launching soon, so keep an eye out for that.

Our culture is diverse and rich and I want to embody that in everything I do.

What are your ambitions musically? 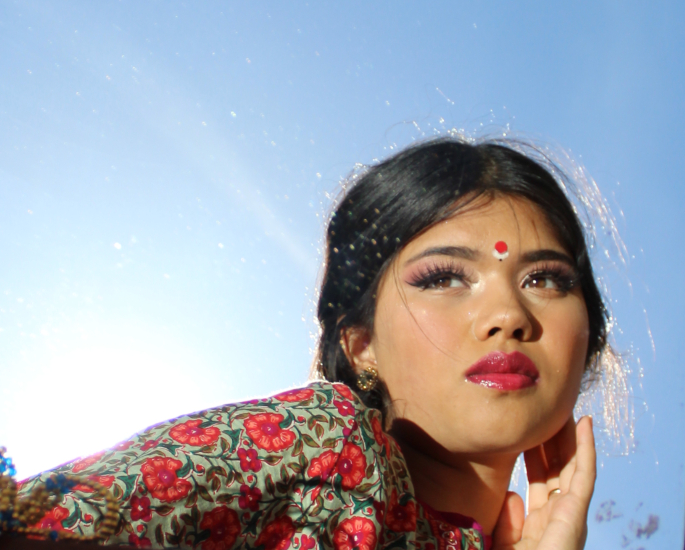 Content-wise we’ve got so much lined up in terms of singles, features, remixes and even a future album.

We’ve got a remix to ‘Elevate Me’ coming out as well as ‘Pull up’ with all the amazing winners of the challenge we did on Instagram.

We’ve also got more Desi fusion tunes in the works too. Most importantly, we’re hoping to grow our following this year and reach more people.

Anyone who is creative knows how difficult this is and how easy it is to lose motivation.

It’s important to truly believe in what you do and believe your work is meant to succeed.

I think the intention is so powerful and I try to remind myself as much as possible of every win, including being featured in this article.

With an abundance of talent and motivation, Maharani is quickly solidifying herself as a prominent South Asian musician.

Her determination for Desi pride, self-love and artistry as well as empowerment and equality are unparalleled.

Her sensual and angelic tones ooze from every track and her voice honours the cultural experiences she has faced.

As she continues to excel within music, Maharani’s exploration of spirituality and self-care highlights her hunger as a person and artist.