Science Student jailed for Stabbing Girlfriend’s Ex and his Friend

"I tried to punch him again, but then realised I had been stabbed."

The incident happened on November 11, 2016, when Alsarayefi, then 17, knifed his two victims at The Manchester College’s Shena Simon campus.

It followed an argument over a post Alsarayefi left on Snapchat.

One of the victims, Ravaah Ahmedi, then 18, had read on social media that his ex-girlfriend was dating Alsarayefi and confronted him.

A fight soon erupted between the two which left the student fighting for his life, after being stabbed multiple times by Alsarayefi.

He was stabbed in the chest, back and upper arm. The teenager suffered a partially collapsed lung.

The victim’s friend, Tate Dore, also 18, tried to intervene but suffered a knife wound to his back.

The Court heard that the double stabbing led to an evacuation and lectures at the campus to be cancelled. 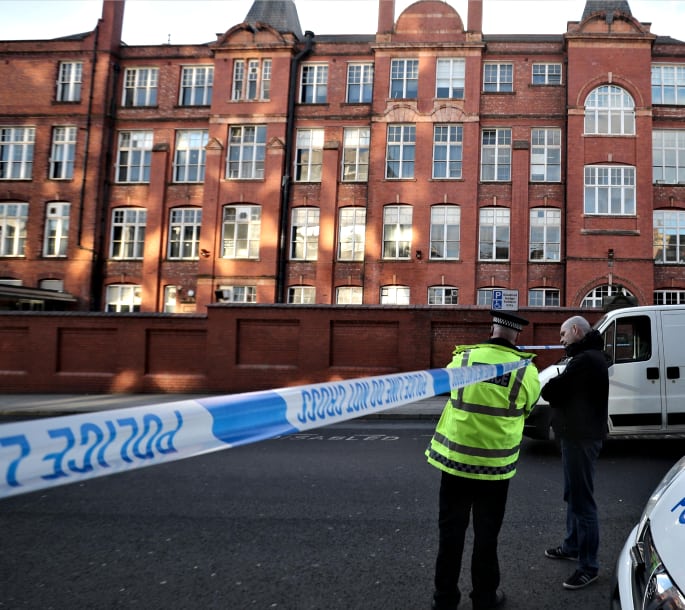 Alsarayefi fled the scene but was later arrested at his home.

He was charged with attempted murder on the day of the incident.

Alsarayefi was a student at the college and was completing a science diploma course.

It was heard that a feud began between Mr. Ahmedi and Alsarayefi when the victim split up with Zulaikha Hussain after he accused her of having a fling with another boy.

Zulaikha, who attended a different college, then began seeing Alsarayefi.

Mr. Ahmedi said: “That summer before the incident our relationship was on and off but I was still seeing her.”

“In the October she mentioned Mohammed and we met.”

“I said I didn’t like her having lads as mates but they can be on a ‘hi and bye’ basis.”

“He accepted that and respected me for this. But then I found out that Zulaikha had slept with someone else so the relationship was over.”

“I told Mohammed he could move forward with her but he wasn’t interested and said ‘I don’t want sloppy seconds’. I believed we were friends.”

“We were at college and he bought me a drink. But then something was out on Snapchat. Mohammed posted a story about him and Zulaikha and I thought he did it on purpose.”

“I felt betrayed and disgusted. I private messaged him saying ‘do you think I am a d***head’ and deleted him.”

On the day of the incident, both Mr. Ahmedi and Mr. Dore saw Alsarayefi with Miss Hussain.

Mr. Ahmedi said: “This made me feel frustrated and I went over to speak to Mohammed with the intention of having a conversation with him.”

The Court heard that the defendant and Mr. Ahmedi went outside to talk before he said:

Out of anger, Mr. Ahmedi punched the defendant but saw a knife in his hand going towards the victim’s chest.

“I tried to punch him again, but then realised I had been stabbed.”

Mr. Dore tried to help his friend but was stabbed in the back.

He said: “I felt a pinch to my back so I punched him and his head hit the floor and a silver object flew from his hand.”

“I then felt I had sweat on my back and it was blood.”

The science student denied any wrongdoing and argued to police that he acted in self-defence and claimed it was Ravaah who had the knife.

He spoke of his relationship with Miss Hussain.

He said: “We never slept together.”

“I approached Ravaah and told him I was seeing Zulaikha.”

Alsarayefi told the jury that he saw a knife in Mr. Ahmedi’s hand and managed to seize it from him during the fight.

He admitted causing the injuries to Mr. Ahmedi and later received a phone call from his father saying that the police were at his home.

At his trial, Alsarayefi pleaded not guilty to the charges brought against him.

It took the jury five hours to reach their verdicts.

He was cleared of the charges of attempted murder but was convicted of two charges of wounding with intent to cause GBH.

“You were 17 when you went to college that day, armed with a very dangerous knife and you used it to inflict a very serious injury.”

“If you had been an adult at that time in an identical circumstance the least possible sentence would have been one of nine years.”

Dhiren is a journalism graduate with a passion for gaming, watching films and sports. He also enjoys cooking from time to time. His motto is to “Live life one day at a time.”
Hamaad Sultan jailed for Killing Man with a Single Punch
Taxi Driver jailed for Sexually Assaulting Four Drunk Women