Sandip Ssingh has revealed a series of WhatsApp messages which disprove the claims that Sushant’s family did not know him.

"Everyone is saying that your family does not know me."

Film producer Sandip Ssingh has released WhatsApp chats with Sushant’s sister that disprove the family’s claim that they did not know him.

Ssingh claimed to be one of Sushant’s closest friends but is one of the suspects in the actor’s death case.

The WhatsApp messages are dated between June 15, a day after Sushant’s death, and July 1, 2020.

They indicate that Ssingh helped the family in obtaining a death certificate, ambulance, press statement and other things.

Previous questions were raised about the claims made by Sushant’s family. WhatsApp messages between the tragic actor and one of his sisters revealed that his family knew about his mental health problems, something his father denied in the police complaint.

The chats were released by Ssingh on September 6, 2020, and were with Sushant’s sister Meetu Singh and his brother-in-law.

“Everyone is saying that your family does not know me.

“Yes, it’s correct, I never met your family. Is it my fault to help a grieving sister alone in this city to complete the final rites of a brother?

“Just want to end the speculation why I was talking to the ambulance driver despite his statement.”

The first message was dated June 15 and read: “Coming home by 9 pm will sit and explain everything.” 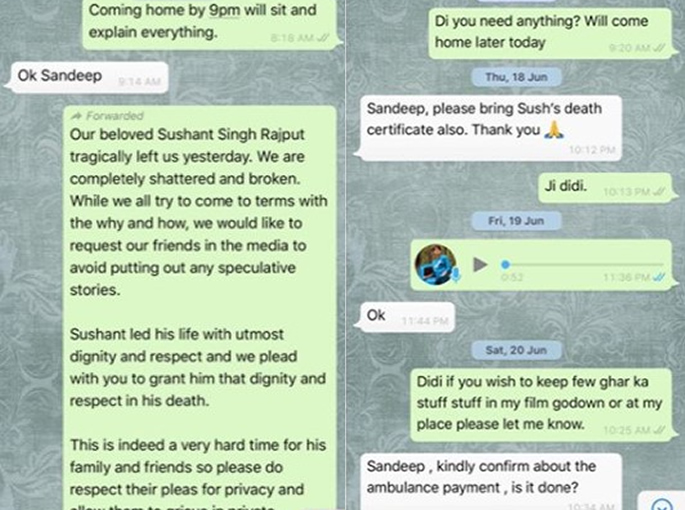 It was followed by a copy of the press statement which the family later released.

Following a message dated June 17, which asked: “Di you need anything? will come home later today.”

On June 20, Ssingh offered to keep Sushant’s “ghar ka stuff” in his film godown (warehouse). Meetu then asked him to “kindly confirm about the ambulance payment” and whether it was done. 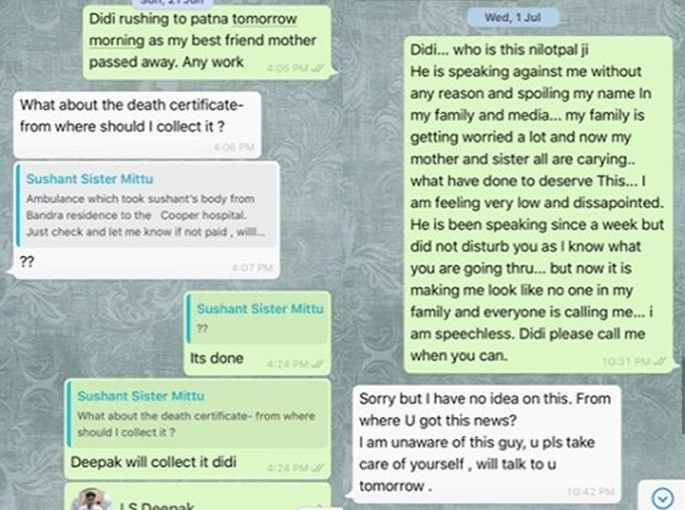 Ssingh later stated that going to help the family may have been wrong.

“Today, I do feel that maybe going and standing with the family was wrong. Maybe, I should have acted selfish and not gone there to stand with them in their time of need.”

Ssingh has been questioned by the CBI following the claims that Sushant’s girlfriend Rhea Chakraborty was involved in the actor’s death.

Rhea has been questioned over allegations of drug abuse surrounding the actor’s death. Her brother Showik has been arrested.

In an interview, Ssingh revealed that he was asked by the CBI whether or not Sushant’s suicide angle could be true, to which he said:

“Sushant Singh Rajput could not have committed suicide.”

Sandip Ssingh then reinforced that Sushant did not take his own life:

“Absolutely not. A person like Sushant cannot commit suicide.”

Sandip Ssingh made headlines after drug allegations and a “BJP angle” were associated with Sushant’s death case.

On August 30, 2020, Maharashtra Home Minister Anil Deshmukh said he had received a lot of complaints against Sandip Ssingh.

He had said: “The CBI is going to investigate Sandip Ssingh, who had made the biopic on the Prime Minister – what relation does he have with the BJP.

“Similarly, what connection does he have with Bollywood and drugs – I’ve got many complaints about that too. We will forward these requests for investigation.”

Dhiren is a journalism graduate with a passion for gaming, watching films and sports. He also enjoys cooking from time to time. His motto is to “Live life one day at a time.”
Arjun Kapoor and Malaika Arora test Positive for Covid-19
‘Kasautii Zindagii Kay 2’ to air Final Episode