British Asian singer-songwriter Samia Malik ended her 2019 tour on a high note, with a successful show at MAC Birmingham. We review the live performance of Samia and her band.

"Writing my first ever song was sort of me rescuing the language.”

The Samia Malik Company Tour and album launch 2019 finished with a spectacular LIVE show in Birmingham, which the audience enjoyed very much.

The two-hour show saw the intelligent vocalist from Norwich singing powerful and appealing English and Urdu songs from her fresh and previous albums.

Samia was accompanied by a gifted trio of musicians, forming a fab four collective. They include the internationally renowned Italian guitarist Giuliano Modarelli, the exceptional multi-instrumentalist Sianed Jones and tabla maestro Sukhdeep Dhanjal.

The talented Camilo Tirado was the sound engineer for the tour, completing a five-star line up. The sound was exceptional throughout the LIVE performance.

We highlight the fantastic Birmingham show, along with our special Q&A with Samia and her band. 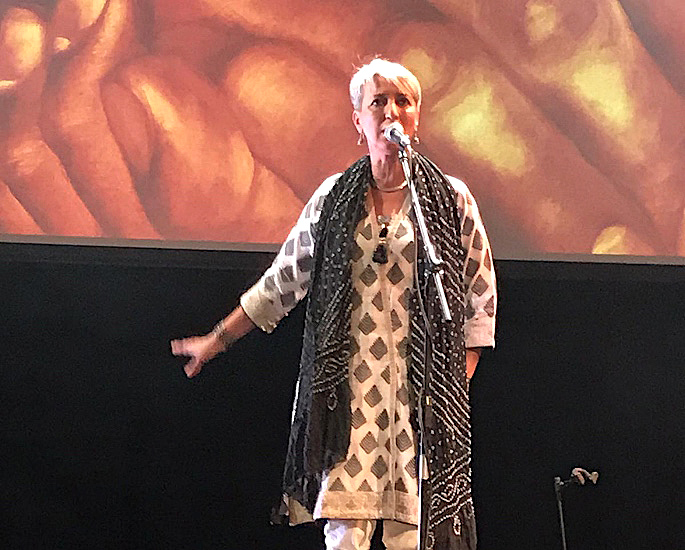 The evening show at the Foyle Studio, MAC Birmingham, began with Samia Malik introducing herself and the musicians. Samia was dressed in a stunningly elegant white kurta and shalwar, along with a trendy shawl.

Performing two musical sets, visually Samia Malik made her presence felt on stage. Her confident vocals were shining through her words, movements and expressions over a colourful and artistic backdrop.

Samia sang a wide range of symbolic and insightful songs. The audiences clapped after each song with keen enthusiasm.

Samia sang her heart out when performing the ballad ‘Junum Ke Dookh’ (Birthright),  which gave a powerful message, signifying life.

She encourages people to believe in themselves and recognise individuality with the lines stating:

“Break your chains, Don’t follow empty traditions. Believe in your own truth, Claim what was always yours.

“Tell your own story, Wear ankle bells and dance, Let the world disapprove.”

Next was an empowering heartfelt ghazal from Samia in honour of her late father, Abdul Latif Malik. Interestingly, he taught Samia Malik that girls should reach for the stars and attain their own freedom.

Her aerial hand movements when singing to the lyrics gave a great sense of passion, positivity and emotion.

Her subtle moves on the stage also took inspiration from the impressive beats of the tabla and guitar.

‘Ik Sheher’ (A City), a  remarkable and gripping acoustic performance by Samia was a high point of the show. There was silence in the auditorium during this captivating track.

Samia addressed the possibility of losing herself in a place of longing as expressed in the lines:

“A city calls me, How can I go there. How can I shift a mountain, Of fear in my heart

“They remember me, But have I forgotten myself.”

Her body language was heavily reflecting the mood of the song. The movement of the hands and the body, along with her expressions were like her representation of the song.

Samia performed ten songs in total, five in each set, with a short interval in the middle. The songs were primarily in Urdu, with one in English.

The final song of the first set, ‘Kooch Log’ (Some People) was a fusion of English and Urdu.

Songs of Samia were primarily exploring the themes of contemporary issues such as freedom, race, gender and identity. She shared her thoughts behind the idea of each and every song.

Furthermore, promoting realism, Samia built a strong rapport with her fans amongst the audience. 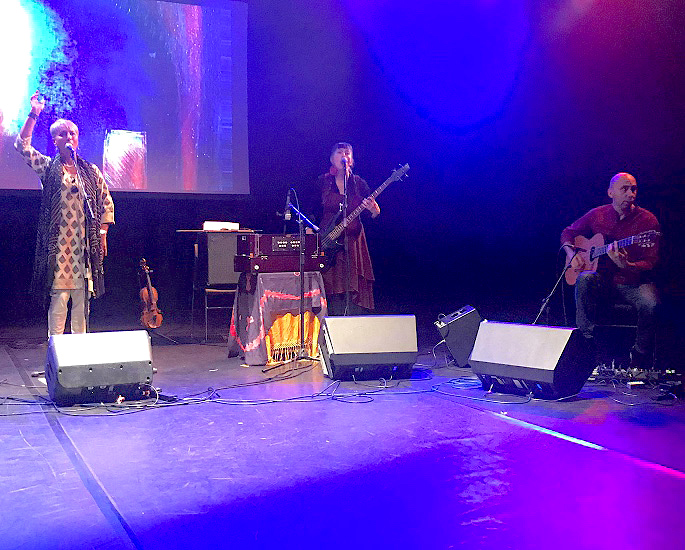 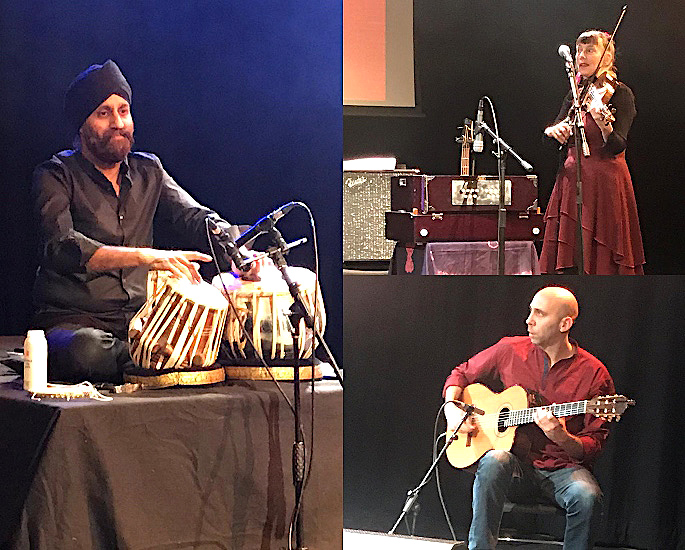 The integration of the different instruments with Samia’s voice and her music genre was very clever.

Each of the three musicians also had their key moments in each song to illustrate their expertise and technique.

Whilst Samia was the star attraction of the night, the musicians constructing the sounds were extraordinary.

Samia was fortunate to have the support of three stellar musicians, coming from a variety of backgrounds.

The band consists of a brilliant multi-instrumentalist, a dazzling guitarist, and a highly experienced tabla performer.

Sianed Jones who plays a range of instruments was particularly influential on the choral parts of Samia Malik. She also features on a few songs, acting as back up and the second vocalist to Samia.

For the song ‘Khailti Hoon’ (I Play), a unique harmonisation of words and sounds through her voice effectively strengthened the tribute.

Sianed also demonstrated her ability to excel at several instruments including the violin, guitar, and harmonium.

In the very last song of the second set, a ‘Do Dil’, her violin skills were extremely enchanting.

With Samia beautifully singing the romantic poem, the violin was perfectly in sync with the vibe of the song.

Italian Giuliano Modarelli, is a composer and producer, along with being a proficient guitarist. Throughout the performance, he was a key factor in starting a tune.

An incredible opening sequence of various sombre and upbeat sounds with the guitar set the tone for the other musicians.

His most wonderful performance that had the audience clapping in appreciation, was for the ghazal ‘Haseen Khwaab’ (Beautiful Dream).

An outstanding demonstration of guitar ability to a challenging catchy poem was truly mesmerising.

Finally, master tabla player Sukhdeep Dhanjal was the final piece of the jigsaw. His notable display came in the song, ‘Colour of Her Heart.’ The speed and duration of his individual art was enthralling.

His vigorous hand movements on the tabla incredibly matched the rhythm of the tunes. He was rewarded with a personal round of applause and even had the band in awe.

There were times when Sukhdeep and Guiliano both matched each other with their playing abilities. 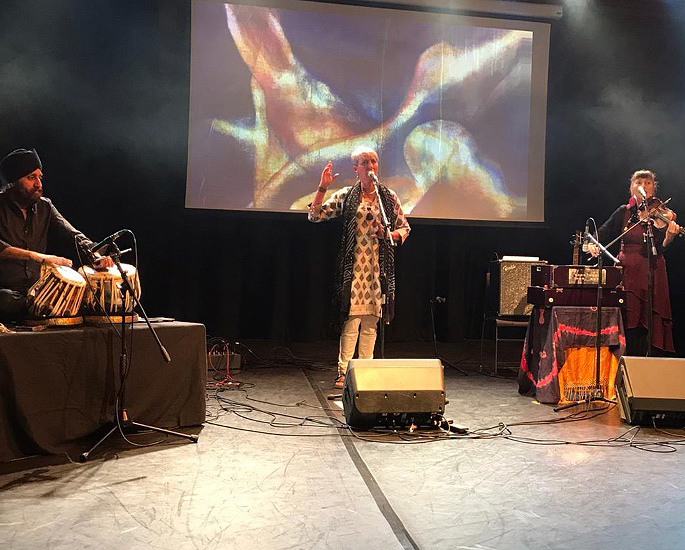 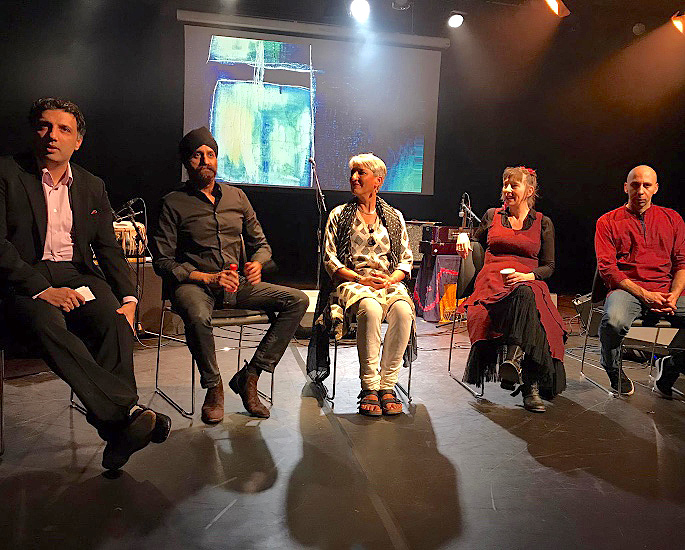 When asked how did it feel like to perform in Birmingham, Samia responded:

“It feels great. I can feel how much people are listening. People listen with their heart, it comes from my heart when performing.”

“I grew up in Bradford, but some areas are very reminiscent here in Birmingham.”

Furthermore, Samia Malik spoke about identifying herself in her music:

“I call myself British-Asian. You can take the best from each culture, my musical work is routed from my own life. But I find it resonates with a lot of other peoples experiences.”

“A lot of my songs are trying to work out my own issues, and talking to myself.”

“Some people love in a strange way, first they tie you in chains and then love you’ – That line is the difference between conditional and unconditional love.”

Additionally, when writing her music Samia suggested that she questioned herself, saying.

“How do I speak to my mother’s language when I don’t have my mother tongue. Writing my first ever song was sort of me rescuing the language.”

The moderator then invited questions from the floor. A member of the audience wanted to know how the different instruments and styles, fitted with Samia’s music.

Speaking about the idea of ‘rhythm,’ Sukhdeep stated:

“For me it’s just rhythm, so it could be any music.”

“Any style of music that is rhythm-based, whether its a tabla or any percussion instrument can just slot in there.”

Giuliano believes it is not necessary to undertake formal study for new music. However, to search for a method is vital:

“Even if you didn’t formally study whatever new music you do, you can construct your own melodies around it.

“For me, it was more a way of finding my own approach to learn forms of the song, and try a different harmony with it.”

Sianed expressed that the tunes of Samia have introduced her to an entirely different world, learning how to adjust her violin with it:

“For me, learning Samia’s melodies has been a new opening of a world, because I was trained in classical western violin.

“So learning how to play around those melodies and to be sympathetic to different rhythms has been a great experience.

“But I suppose I’ve also allowed myself to have some of my classical violin to creep back into Samia’s music.”

Further into the Q&A, in response to her involvement in other projects, Samia did mention that she conducts workshops with women.

Samia went onto say that the workshops are held at particular women’s centres/organisations that support victims of domestic violence. She tends to sing empowering songs to them. 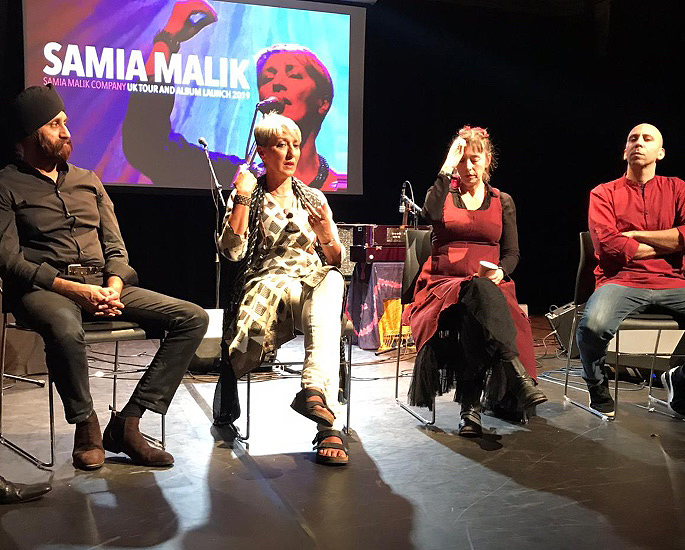 MAC Birmingham was the grand finale for her successful 2019 UK tour. Samia Malik who also regularly tours abroad has a bright future ahead, hopefully consolidating herself in the music world.

She is also aspiring to tour again as she said:

“Having got this band together, I’m excited by the possibility of touring again. We live on opposite sides of the country, so rehearsing is very difficult.”

Popular songs of Samia Malik will allow fans to connect with her life story, appreciating the vocals and music quality.

The show in Birmingham was a sample of what listeners can expect from her album.

The Q&A session, courtesy of DESIblitz rounded up a very soothing evening, with the audience wanting more.

To keep updated with Samia Malik and her music, please check her website here:

Ajay is a media graduate that has a keen eye for Film, TV & Journalism. He likes playing sport, and enjoys listening to Bhangra and Hip Hop. His motto is "Life isn't about finding yourself. Life is about creating yourself."
Shakti Mohan & Cricketer Dwayne Bravo collaborate for Song
Pakistani Wrestler accuses Riz Ahmed of Exploitation in Video