Rekha is Golden as Super Nani

In Super Nani, golden screen star Rekha plays a traditional grandmother with strong family values. Can she transform into a modern day Nani?

"Rekha was the only actress who could pull this off with her superior acting skills."

Rekha returns to the big screen with her first leading role in some years with Super Nani.

This film follows the journey of a family drama and the main character Bharti Bhatia, a grandmother aka Nani (Rekha). She is a lovable grandmother who shows nothing but affection for her family as she spends most of her time taking care of all their little needs. 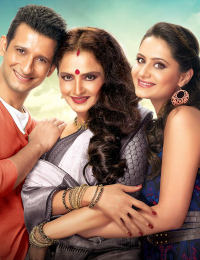 Her family have all grown up and are pursuing modern careers. Bharti realises she can’t keep up with her family’s wants and needs, and the family’s modern values. Nonetheless, she continues to perform her duties as a devoted elder of her family.

However the culture clashes between the old and new principles begin to emerge. Her family eventually begin to show they have had enough, and all her well wishes to her family become ridiculed.

This naturally upsets Bharti, as her family want her to change to fit in with modern day. She feels isolated from the family, that is until her grandson Mann (Sharman Joshi) arrives to surprise his Nani.

He is astounded that Nani is no longer the commanding strong lady she once was. As a devoted grandson he decides he will help Nani change and become super fabulous! 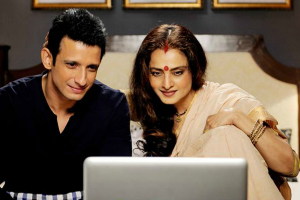 The journey of this 60 year old woman is endearing for all the family to watch. The power to do anything lies within, all that is needed is the strength, courage and support to discover it.

The movie will send across a strong and important message to all the women in the audience that their life doesn’t stop at the age of 60.

Indra Kumar had stated that Rekha was the first and only choice he had in mind for Super Nani:

“When we finalised the story, we realised that Rekha was the only actress who could pull this off with her superior acting skills and her powerful screen presence and charisma.”

“We did not even think about any other actresses for the role and thankfully Rekha agreed to be a part of the film when we approached her. The rest, as they say, is history.”

Sharman Joshi is sharing the big screen with Rekha for the first time. The movie is said to be an emotional movie about the empowerment of women, and Sharman even became emotional during the narration of the script.

It is rumoured that Sharman had tears in his eyes and requested to take a short break. This raises the expectations of the film considerably high; hopefully the audience will match the emotions that Sharman had.

Harshit Saxena and Sanjeev Darshan directed and composed the soundtrack to the movie, the lyrics were penned by Sameer and Sanjeev Chaturvedi. 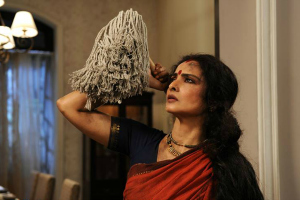 The soundtrack includes ‘Prabhu Mere Ghar Ko Pyaar Karo’, which is a sweet sounding traditional song, with gentle woodwind instruments and a gentle medley, the song is simply uplifting.

‘Maheroo Maheroo’ is a duet with the vocals of Shreya Ghosal and Darshan Rathod, the song contains heavy guitar sounds which sounds quite unconventional.

‘Nani Maa’ contains the vocals of no other than Sonu Nigam, this song ties with the title of the movie and is very fitting as it contains to the feel and emotions of the film.

The final song ‘Dhaani Chunariya’ contains the vocals of Shreya Ghoshal and Harshit Saxena. The song is brought alive with the desi dhol beats and the vocals of both singers. All in all, the soundtrack seems to be very fitting, traditional and pleasing to hear.

Rekha is back in her element with Super Nani, and we look forward to seeing her in more roles on the big screen. Super Nani released from October 31, 2014.