In its third successful year, Wembley Stadium played host to the Asian Football Awards 2015. Find out who won what at the glamorous event.

"I hope to see more unsung Asian heroes from the grassroots of football being recognised for their individual inspiration."

The iconic home of English Football, Wembley Stadium played host to the increasingly popular Asian Football Awards (AFA) in only its third year.

A vibrant evening started off with the arrival of special guests, nominees and past award winners who were welcomed with a champagne reception.

Since the launch of the Awards in 2012, Wembley Stadium has ensured it plays a fitting part in the prestigious ceremony. So familiar are the Awards to Wembley that it wouldn’t be the same anywhere else.

The AFAs, in association with Inventive Sports is the brainchild of Baljit Rihal.

In 2012, Baljit launched a very successful Awards ceremony with the support of the English Football Association (FA).

This was with the sole intention of rewarding teams and individuals with the recognition they deserve in the mainstream game. 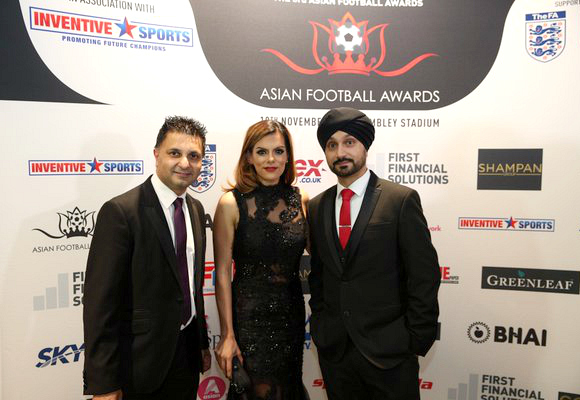 The Awards have proven to be a massive success, year-on-year. Rihal, also the CEO of Inventive Sports, is making the most of his good work by expanding his influential global reach by benefitting more people the world over.

Not just focusing on players, but in his own words at the 2015 Awards, Rihal stated: “I hope things will have changed in 5 years and that there is no longer a need to have an ‘Asian’ Awards ceremony to highlight the cause for the current minority.”

Director of Inventive Sports, Jas Jassal, echoed his words, saying: “I hope to see more unsung Asian heroes from the grassroots of football being recognised for their individual inspiration.”

The glitzy Awards night opened with a rousing opening speech from AFA Founder Rihal who reiterated his message from the heart, that we must all continue to support each other and increase Asian representation in the professional arena of the beautiful game. 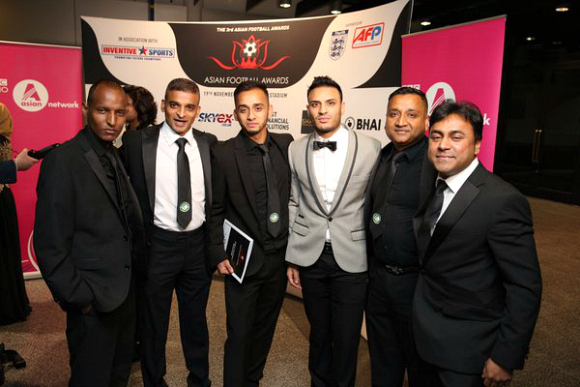 This was followed by Greg Dyke, Chairman of the FA, who congratulated the Asian Football Awards for recognising Asian talent in the modern game.

Amongst the Judges for the Awards were famous names like Steve Coppell (ex-Manchester United FC, Crystal Palace FC, Reading FC and England), Jermain Defoe (Sunderland AFC and England) and Graeme Le Saux (ex-Chelsea FC and England) to name a few.

The hosts for the night were TV presenter and Man Utd fan, Dharmesh Sheth, an ‘ever present’ for the Awards, who was joined by his co-host, radio presenter and ardent Liverpool fan, Noreen Khan.

Noreen hit the headlines in 2013 by wearing a Liverpool FC saree during her first appearance at the Asian Football Awards.

The elegant Noreen didn’t let her side down as she sported a golden Liverbird brooch pinned on a stunning red outfit. 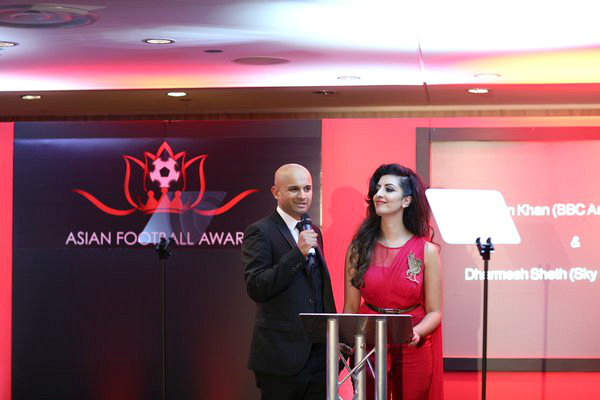 Swansea City and Wales star Neil Taylor hung on to the ‘Player Award’ that he won the previous year and thanked everybody for their support and hoped for the same level of support when he goes on to represent Wales at Euro 2016.

“We need to create more role models for the younger generation and transfer the high representation of Asians in the Grassroots of the game to the professional level at the top of the game.”

Amongst the large representation on the ladies side, radio presenter Suzi Mann said: “There’s a real strong platform now available to portray a lot of the talent that we have, especially with events like these where highlighting the talent that already exists is equally important.” 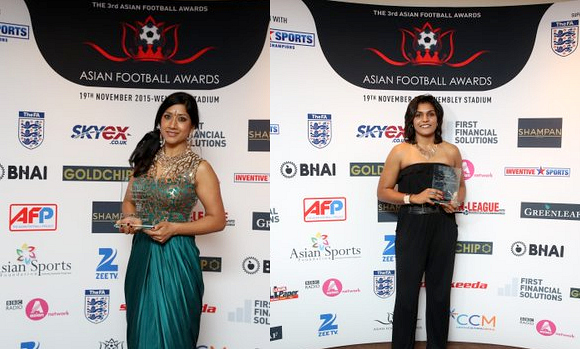 The Asian Sports Foundation were a key supporter of the ceremony. Founder, Jug Johal, highlighted that 46 per cent of the UK participate in sport, but a staggering 92 per cent of South Asian women in the UK do not participate in any form of physical activity.

The Asian Sports Foundation have been campaigning hard in increasing inclusion, equality and involvement in all sports within the Asian community.

Here is full list of the winners for the Asian Football Awards 2015:

The hugely successful Asian Football Awards has in its last three events raised awareness of the key talents that exist among individuals in the Asian community, across all sectors of the sport.

Whether a professional footballer or a grassroots coach, the key message of the Asian Football Awards is that any and every Asian that is involved in the game is a key part of it and should be proud of their ambassadorial role in football.