Ranveer Singh was spotted at the Premier League Football in London with supermodel Bella Hadid and YouTuber Chunkz.

"Never expected this collision of worlds."

A fan account shared a picture of Bella Hadid, Ranveer and YouTuber Chunkz posing for the camera.

In the photo, while Bella is seen making a victory sign with her hand, Ranveer is seen next to her.

In the photo, Ranveer is seen in an off-white outfit while Bella is seen wearing casual attire.

Netizens took to the comments section to share their thoughts on the “strange crossover”.

One person commented: “Sometimes it feels like Ranveer lives in some alternate universe.

“First Machine Gun Kelly and Megan Fox, then Bella Hadid. That too at the Arsenal game.

“Strange crossover. Noice. Hope Ranveer enjoyed the 3 points as much as I did.”

Another added: “Chunkz is the number one Bollywood fan and I know him and Ranveer are besties now for sure.”

A third commented: “Never expected this collision of worlds.” 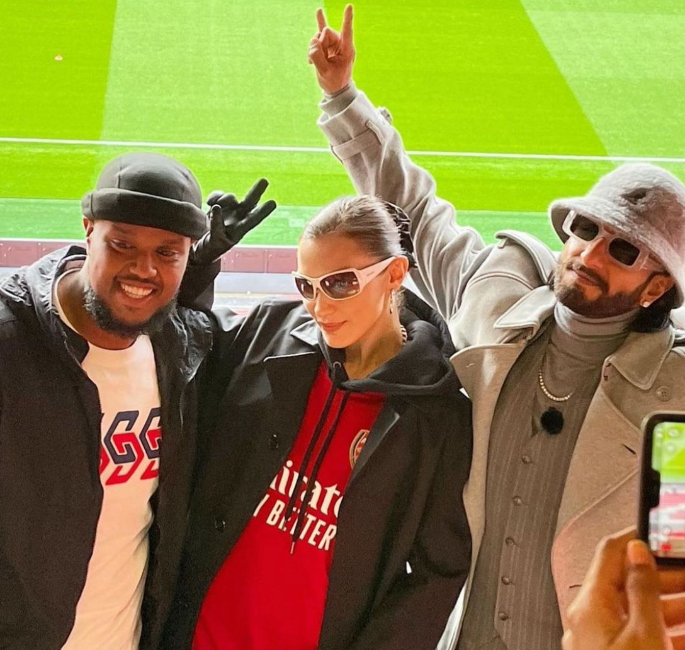 Another fan added that Bella Hadid and Chunkz followed Ranveer on Instagram after meeting the Bollywood actor.

Ranveer Singh has headed to the UK after being specially invited to watch Premier League football in the country.

Ranveer confirmed the development by saying:

“It’s going to be really exciting! I know it. I’m all pumped up!

“I’m heading there to watch some of the biggest matches – Manchester United vs Tottenham Hotspur, Arsenal vs Leicester City, Crystal Palace vs Manchester City.

“I cannot wait to be there.”

The actor was earlier invited to play at the NBA Celebrity All-Stars match where he had a gala time being in the company of some of the most revered stars of the game.

The Bollywood megastar played basketball on February 18, 2022, in Cleveland, Ohio, alongside a whole host of celebrities.

Ranveer was last seen in Kabir Khan’s film 83, which told the story of the Indian cricket team’s World Cup win.

He also has Rohit Shetty’s Cirkus in the pipeline.

The film will star Pooja Hegde and Jacqueline Fernandez.

Apart from this, he will also be seen in Rocky Aur Rani Ki Prem Kahani, alongside Alia Bhatt.

Ravinder is a Journalism BA graduate. She has a strong passion for all things fashion, beauty, and lifestyle. She also likes to watch films, read books and travel.
Aamir Khan opens up on Rumours behind Kiran Rao Divorce
Abhishek Bachchan shares First Look of ‘Dasvi’