Priyanka Chopra meets Narendra Modi and ‘The Hoff’ in Berlin

Priyanka Chopra has faced a busy week in Berlin, from meeting David Hasselhoff to Narendra Modi. But she faced backlash over her meeting with the Indian PM.

In her first Hollywood project, she’s pulled out all the stops to make a great impression.

And when the tour hit Berlin, she has shared with fans some of her big highlights. Of which included David Hasselhoff and Narendra Modi, India’s Prime Minister.

Priyanka Chopra arrived in Berlin on 29th May 2017 and attended the Baywatch press conference the following day.

Sticking to her colour theme, she added white strappy heels to her look. With a glamorous smile, Priyanka seemed ready to impress everyone.

After a quick wardrobe change, Priyanka shared with fans an exciting picture featuring herself and David Hasselhoff! “The Hoff” didn’t just pose with the starlet, but also with the whole cast, such as Dwayne “The Rock” Johnson and Zac Efron.

It seems the original Baywatch star has passed the torch down to the new generation of “lifeguards”. 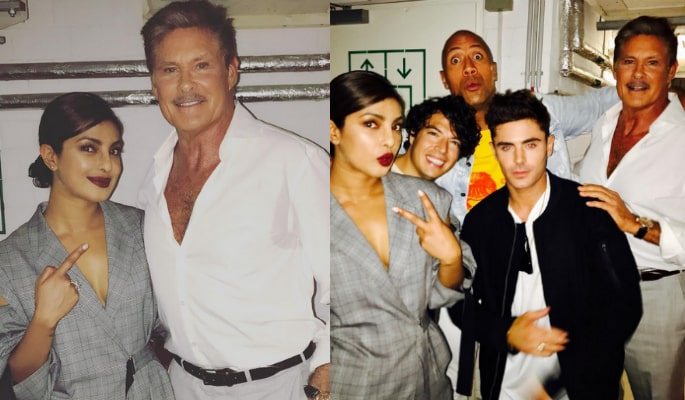 Throughout the day, Priyanka appeared in high spirits and took many selfies with the fans.

However, on social media, it became an entirely different story. Many were outraged over Priyanka’s earlier meeting with India’s Prime Minister, Narendra Modi.

Prior to attending the Baywatch press conference, it so happened that the political figure was in Berlin at the same time. They met together for a talk and posed together for pictures.

Priyanka seemed very humble to meet the Prime Minister and said of the occasion: “Thank you for taking the time to meet me [Narendra Modi] sir. Such a lovely coincidence to be in #berlin at the same time as you.”

Thank you for taking the time to meet me this morning @narendramodi Sir. Such a lovely coincidence to be in #berlin at the same time. ???? pic.twitter.com/vLzUSH5WR1

However, many took to comment on Priyanka’s appearance when meeting Narendra Modi. In particular, that she chose to wear a short dress, revealing her legs.

Dubbing it as inappropriate, many harshly critiqued the star. Wandering Soul remarked:

“Next time please show some sense and manners and wear something more appropriate. Not expected such demeanour.”

Meanwhile, Priyanka has not directly responded to the comments. But she posted a new picture, showing off her stunning legs in the image, as did her mother, Madhu Chopra.

One could argue that the criticism Priyanka has faced seems ridiculous. Instead of wondering what the star and Narendra Modi spoke about in their meeting, fans have focused on her legs.

While the dress may raise questions over appropriateness and respect, are Priyanka’s legs really the most important aspect of this meeting?

It seems priorities are changing more and more in this social media age.

We wonder if Priyanka will add more on the matter in the next coming days.