Bollywood actress Preity Zinta delighted fans with a behind the scenes picture from the sets of her film Kabhi Alvida Naa Kehna.

"Can you guess what @Karanjohar is saying to me & @iamsrk?”

Preity took to Instagram to share the picture which featured herself, co-star Shah Rukh Khan and director Karan Johar.

In the picture, Preity is seen sitting on the bed with a funny expression on her face, in a nightdress and rollers.

Behind her is Shah Rukh Khan who is holding a paper which can be assumed to be the script of the film.

Sitting next to Preity is director Karan Johar who looks rather stressed and annoyed as though he is fed up of shooting the scene. Preity captioned the picture:

“Look what I found. Can you guess what @Karanjohar is saying to me & @iamsrk?”

Look what I found ? Can you guess what @karanjohar is saying to me & @iamsrk ? #throwbackthursday #ting

This particular scene revolves around Dev (Shah Rukh Khan) trying to seduce his wife Maya (Preity Zinta) to prove his love for her.

As a result of sharing this picture, many fans took to the comment section to guess the answer.

One user suggested the answer is, “I think I need a massage baby” while another user said, “Pretend you don’t like each other.”

Another user guessed Karan Johar was frustrated because SRK and Preity were not being serious.

He said, “Stop fooling and get on with the scene???”

Fans also shared their love for this scene in the film. One user said it was her “Favourite scene from the film.”

Kabhi Alvida Naa Kehna (2016) revolved around the themes of extramarital affairs and insecurities.

Dev (SRK) and Maya (Rani) meet each other and strike an unlikely friendship in the middle of their respective failed marriages.

They attempt to help each other salvage their respective marriages and in the process, fall in love.

This leads to their extramarital affair which destroys their married life.

Preity Zinta’s hilarious throwback picture certainly sent fans down memory lane. As of yet, the actress has not revealed what Karan Johar really said. 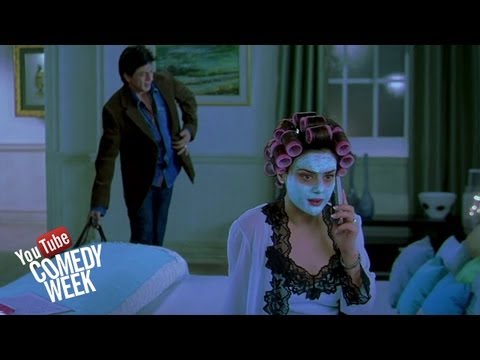 Ayesha is an English graduate with an aesthetic eye. Her fascination lies in sports, fashion and beauty. Also, she does not shy away from controversial subjects. Her motto is: “no two days are the same, that is what makes life worth living.”
Neena Gupta received Marriage Proposals so her ‘Child gets a Name’
Sara Ali Khan gets trolled for Wishing Brother ‘Happy Birthday?’