Folk dances of Bangladesh are simple, yet spontaneous and are passed down from one generation to another. We look at five popular dances from the country.

There are many forms of dance in Bangladesh, but the main style is folk dance, also known as Bangladeshi regional dance.

Some popular classic dances practised in Bangladesh include Kathak, Bharatanatyam, Odissi and Manipuri.

They allow a level of freedom and expression through improvised and energetic dance moves.

They are passed down from one generation to another and take a number of influences. Some incorporate martial arts while others are inspired by cultural myths and legends.

Singing is an essential part of these Bangladeshi dances and brings the community together.

Each folk dance has unique and unmistakable characteristics, and are either performed as a group or by an individual. 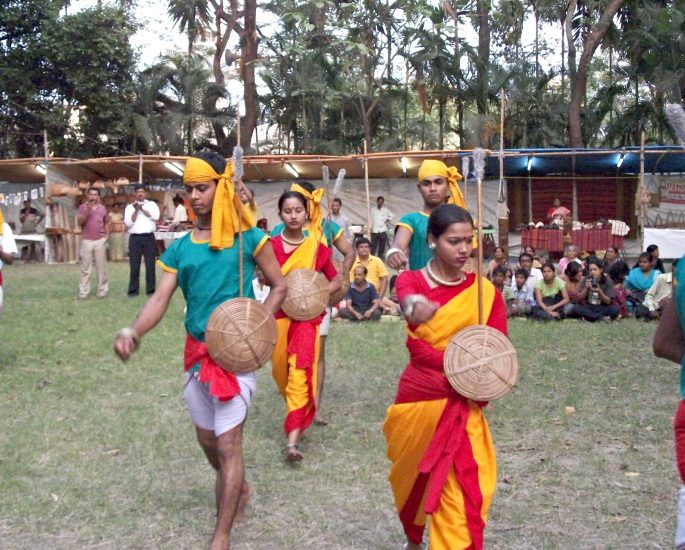 It enacts a duel between two people whose weapons are thickly woven cane shields and bamboo sticks.

Dhali dance performances are inspired by martial arts which is prominent throughout the dance.

Drums and brass cymbals offer the musical part and to add to the intense nature of the dance.

The dance displays the dancers’ physical strength and martial skills and begins with the two performers facing each other menacingly, in sync with the beating drums.

Their performance takes off when the dancers showcase martial skills to depict their attacks and counterattacks, either standing or kneeling.

The fiery dance performance of the mock battle continues until a climax is reached, where the ‘battle winner’ is highlighted.

Dhali dance is usually performed on stage at folk fairs in the Jessore and Khulna regions of Bangladesh.

The Dak folk dance originated in the Manikganj District of the Dhaka Division in Bangladesh and is one of the more intense dances.

It has a war-like theme and it’s objective during the performance is to call fellow warriors to battle.

The dance begins with the leader calling out that the enemy has launched an attack and his fellow warriors must be ready for battle.

Through energetic dance moves, it tells a story to the audience depicting the initial stages of the battle.

The group performance is played out to the beating of a drum. Depending on preference, it may or not be accompanied by other instruments.

The name Dak refers to the call that the leader makes when the other dancers run on stage and the choreographed battle takes place.

After this happens, the second part of the dance begins, which takes influences from a number of martial arts.

The dancers exhibit martial skills with the use of sticks to highlight the battle.

It’s intensity and martial arts inspirations make it one of Bangladesh’s most popular folk dances. 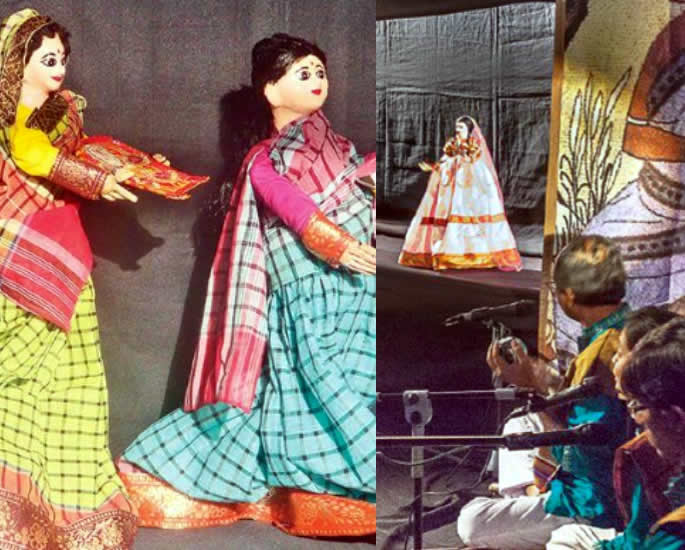 Puppet dances are one of the oldest folk dance forms in Bangladesh as it is not known how old they are in the country.

The first reference to puppets is found in Yusuf-Zulekha, a 15th-Century love story.

Three forms of puppets are used: rod puppets, string puppets and glove puppets. All are given the illusion to be dancing.

Depending on the song played, the puppets are made to dance to reflect the tone of the song.

The puppets are created with the vast vibrancy to appeal to the crowd.

Glove puppets are the most popular variation as they dance as a male-female pair. The puppeteer holds a puppet in each hand and sings while making the puppet dance.

The main purpose is to provide information, but they also entertain the viewer with the stories told through puppet dancing.

In the past, they were shown at weddings, but many artists of this unique dance form left it, causing a setback.

Today, it still exists but is quite exclusive as only a small number of families in the Brahmanbaria District still specialise in this art.

The dance, which literally translates to ‘dances by young boys’, features youths playing the roles of women.

It typically accompanies Alkap songs, which is a regional genre and is performed on stage in an open field or mango grove.

The Chhokra dance is one of the more extravagant dances as it involves a large team for the performance.

Singers, musicians and dancers all take part and even a clown forms part of the troupe. A Sarkar leads the large team.

Together, it provides an entertaining spectacle for audiences.

Musicians sit along the sides of the stage, while the dancers wait for their cue to perform.

The dance takes some inspiration from classical dance but is more natural. They express themselves more this way.

The high-energy performance by the dancers makes it very entertaining for the audience.

Performances are usually held late at night because elements of the song and dance are quite crude. As a result, the majority of the audience are adults.

Nevertheless, it is still a fun performance for spectators in Bangladesh. 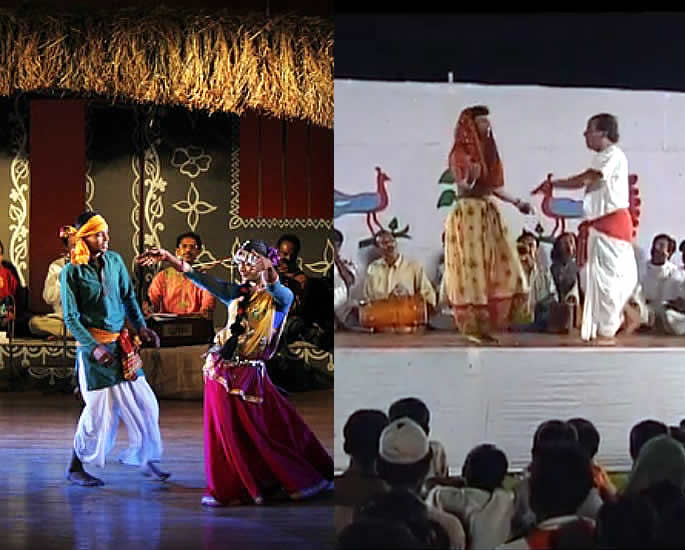 The Ghatu dance form is similar to the Chhokra style as it features young men performing whilst dressed as young women.

Sometimes, girls do sing and dance this Bangladeshi dance form. But mostly, it is performed by young men, especially due to the intimate themes of this dance which prohibits girls to perform the dance.

It accompanies traditional Ghatu folk songs and is solely to entertain the audience, it has no specific significance.

The dance is more versatile than other folk dances as it can be performed by an individual or by a group while telling a story, usually, love stories.

One person sings while the others dance to the sounds of drums, cymbals, the flute and sarinda, a stringed instrument similar to a fiddle.

The folk dance is one which has existed for years.

The Ghatu can be quite adult-themed, so it commonly takes place at night in front of older audiences and can go on for hours.

Ghatu dance performances would take place in secluded areas away from populated areas. However, these days, it is performed on modern stages in the districts of Kishoreganj and Netrokona.

The intriguing stories told through the dance form have made it one of the more popular and entertaining folk dances of Bangladesh.

Folk dance in Bangladesh is a powerful way of showcasing the rich history of the country using a number of influences.

Dances like Dak and Ghatu has huge influences of war and act more like a dramatic play with intensity throughout.

Ghatu dances are mainly performed for the audience’s entertainment through energetic and well-choreographed sequences.

All are performed throughout Bangladesh and have become very popular every time there is a performance.

Dhiren is a journalism graduate with a passion for gaming, watching films and sports. He also enjoys cooking from time to time. His motto is to “Live life one day at a time.”
Hard Kaur drops “Aunty Dance Kar” her First Punjabi Rap song
AR Rahman talks Suicidal Thoughts in Notes of A Dream