8 Sculptures that are Popular in Bangladesh

Sculptures are a form of art which usually serve to provide a wider meaning in many countries. This includes Bangladesh where they are very popular.

It was then toughened up with concrete and built up to a height of 11 feet.

Bangladeshi sculptures are full of history and many depict a clear message no matter how old they are. There are many in the country which are popular for their significance.

Sculptures are a unique form of art as a range of materials can be used to create art.

Usually, older pieces of art tend to use materials like stone or concrete, while contemporary ones may use a combination of materials.

Sculptures in India and Pakistan highlight a number of social messages related to wider issues, and in Bangladesh, this is the same.

A lot of the artwork has been created as a way of paying tribute to an event or someone. Some of Bangladesh’s most famous sculptures were created in memorial of the Bangladesh Liberation War.

Sculptors used this tragic event to inspire them to create something which is definitive.

As a result, these and other sculptures have become very popular in Bangladesh.

We take a look at some of the most popular works of sculpture in the country. 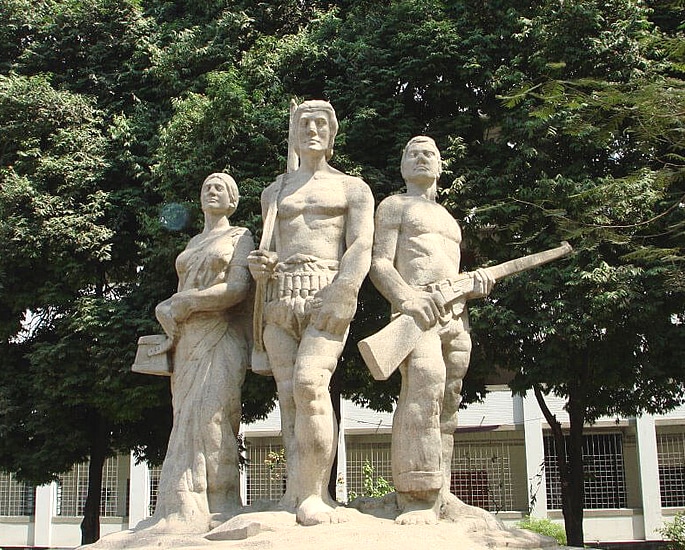 The Aparajeyo Bangla is one of Bangladesh’s most famous sculptures. It was built in 1979 and is dedicated to the Bangladesh Liberation War.

It was built based on Syed Abdullah Khalid’s design and information from the Dhaka University Central Students’ Union.

The sculpture was first built so that it was three feet long, however, the Dackshu Authority broke it down. It was then toughened up with concrete and built up to a height of 11 feet.

Work on Aparajeyo Bangla began at the end of 1973 but came to a halt when Bangladeshi politician Sheikh Mujibur Rahman was murdered.

Construction restarted in January 1979 and it was finally completed in December 1979.

Three dynamic statues feature. The left side sculpture depicts a female nurse while the middle one is a farmer carrying a rifle on his shoulder. The right one is of a student holding a rifle in his hand.

They represent the nation’s strength as well as commemorating the glory of liberation.

The famous statue is located on the campus of Dhaka University. It is a statue which is popular across the world, not just in Bangladesh. 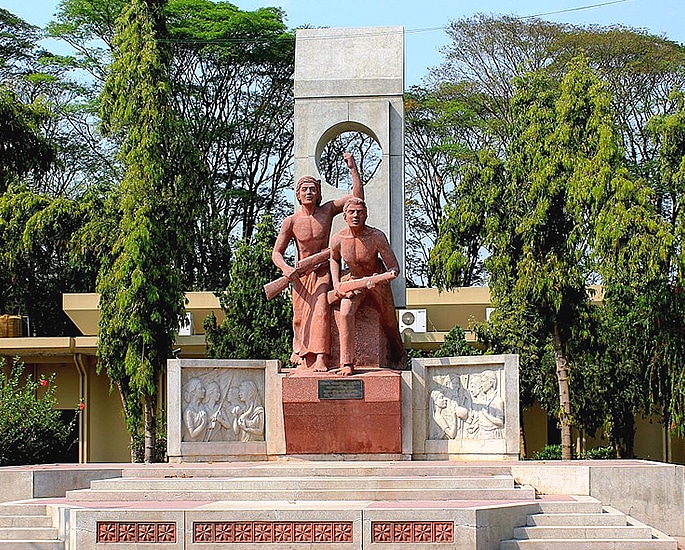 The Shabash Bangladesh sculpture is another popular piece of art that is devoted to the Liberation War of 1971.

It was completed in 1991 and was designed by Nitun Kundu who was a famous Bangladeshi artist and sculptor.

He became known for creating art which was aimed at raising awareness of the war where the Pakistan Army unleashed genocide on the people of Bangladesh.

It was this tragedy which became the inspiration for the Shabash Bangladesh and is his most famous piece of work.

The sculpture acts as a tribute to the fallen freedom fighters during this time.

The name of the sculpture comes from a poem named ‘Durmor’ by Sukanta Bhattacharya. The last four lines are engraved under the structure.

“Bravo Bangladesh! The world is amazed! Fired, burned, died and destroyed but never gave up!”

This sculpture is situated on campus at the University of Rajshahi and continues to remain one of the countries most famous sculptures. 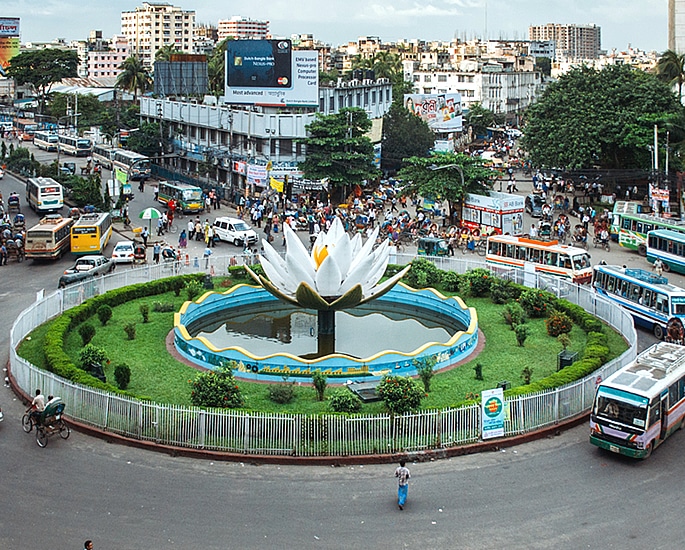 The Shapla Chottor is a renowned sculpture located in the heart of Motijheel, near Dhaka.

It is a huge sculpture which depicts a water lily, the national flower of Bangladesh. The water lily represents the many rivers that run through the country.

The contemporary piece of art sits in the middle of a roundabout in the city and is surrounded by a fountain.

The location also marks a mass grave as a result of the Liberation War.

It is a popular sight to see as it is a unique design especially in the historical area of Motijheel.

The construction of it is very eye-catching and it becomes even more beautiful when the fountain is flowing.

Its unique design makes Shapla Chottor one of the most recognised landmarks in Motijheel.

The sculpture signifies unity as does the water lily. Bangladeshi people believe that it purifies their soul and unites them all as the petals. 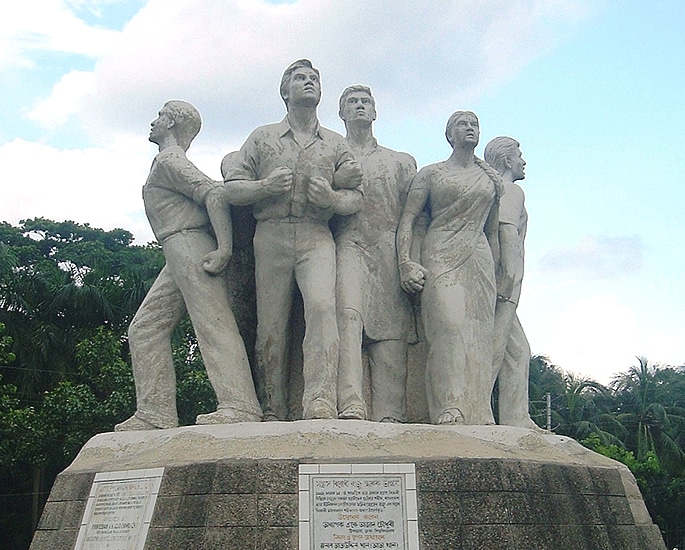 The Raju Memorial Sculpture is one of the most famous sculpted works in the country and is located at the University of Dhaka.

It was created by Shaymol Chowdhury in 1997 and is dedicated to the memory of Moin Hossain Raju, a student at the university.

Raju was an activist who protested against terrorism. A clash broke out between two groups of people in 1992.

Violence and gunfire spread panic in the area, however, Raju demonstrated that he won’t be intimidated by campus violence.

Unfortunately, he was shot and killed, but the sculpture lives on in his memory.

The concrete sculpture depicts a group of students with their arms linked and marching in defiance. This is what Raju believed in as his way of protesting was to show dominance.

Twenty-seven years after Raju’s death, the sculpture still conveys a powerful message and hoists the spirit of progress, bravery and patriotism. 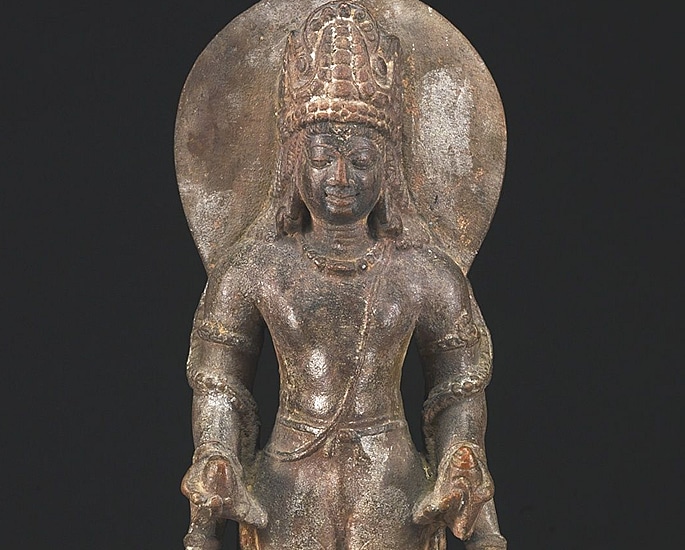 Sculptures have been the main source of rendering the historic identity of ancient Bangladesh.

It flourished during three dynasties: Gupta, Pala and Sena. It began during Gupta rule where many of its early sculptures were of deities.

One example is Vishnu from Machmoil Bagmara which is carved in grey sandstone. The figure is in a strict front standing pose.

Though its main features go against the style of Gupta sculptures, it’s appearance has a style that seems to show a point of transition between two phases.

Many of the Gupta sculptures in Bangladesh are of icons and have had an impact when it comes to art.

The Gupta phases became an influence for Pala sculptures and are one of the earliest forms of sculpting in Bangladesh.

Many of these ancient sculptures have been preserved in the Varendra Research Museum. 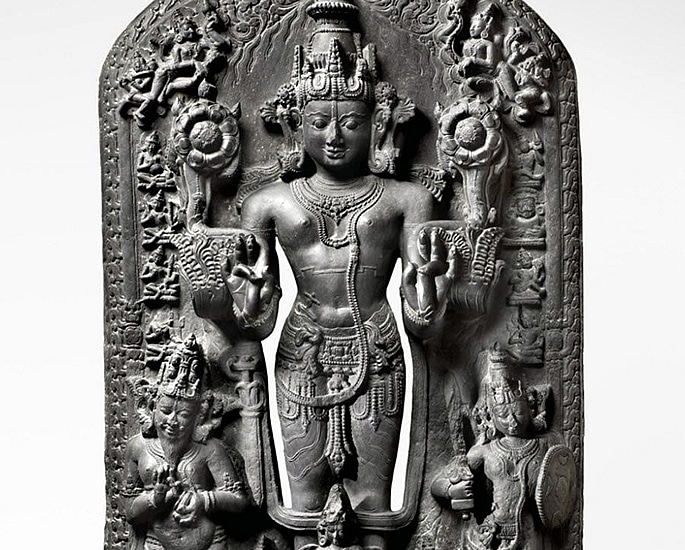 It is similar to the Pala style, however, the modelling quality shows a distinct deterioration.

The modelling of the body is still the same but in a declining way. This is seen with Visnu from Churain, Dhaka, which is one of the best examples of metal caster’s art.

The body form is more elongated than those sculptures from the 11th century.

The legs are almost like columns and stiff with a circular ring to highlight the knee.

There is some attempt to have the main figure separate from the back slab by following the curvature of the figure.

However, the entire sculpture is compressed into the carved slab.

Despite this, Visnu from Churain, Dhaka is part of a famous period within Bangladeshi art. 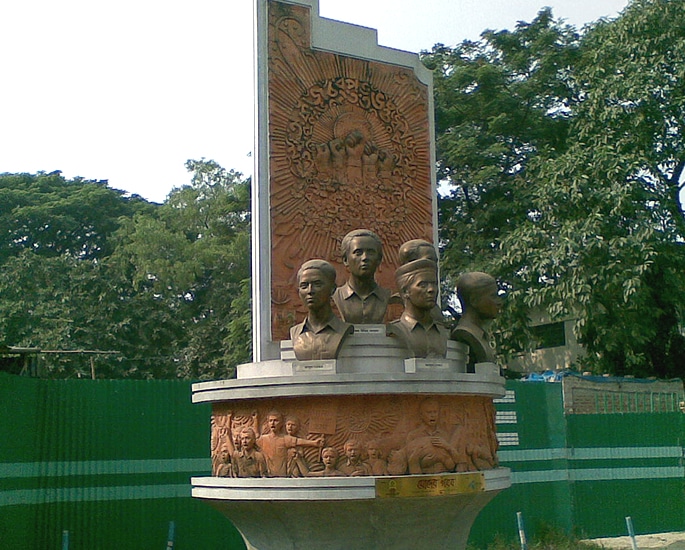 Terracotta sculptures are popular in Bangladesh and the Moder Gorob may be one of the most well known.

Moder Gorob or Our Pride is located in front of Bangla Academy, Dhaka, and is dedicated to the victims of the Bengali Language Movement demonstrations of 1952.

There are five metal sculptures of Abdus Salam, Rafiq Uddin Ahmed, Abdul Jabbar, Abul Barkat and Sofiur Rahman. These five were killed during the demonstration.

A terracotta mural sits behind the metal busts and it represents the historic event.

When the memorial sculpture was unveiled in 2007, former student Mesbah Uddin Khan said:

“This is a beautiful work that will certainly be helpful to the present generation who have no idea about the Language Movement and who are eager to learn about it.”

The important sculpture serves as a tribute and acts as an educational aspect to those who want to know more about the event. 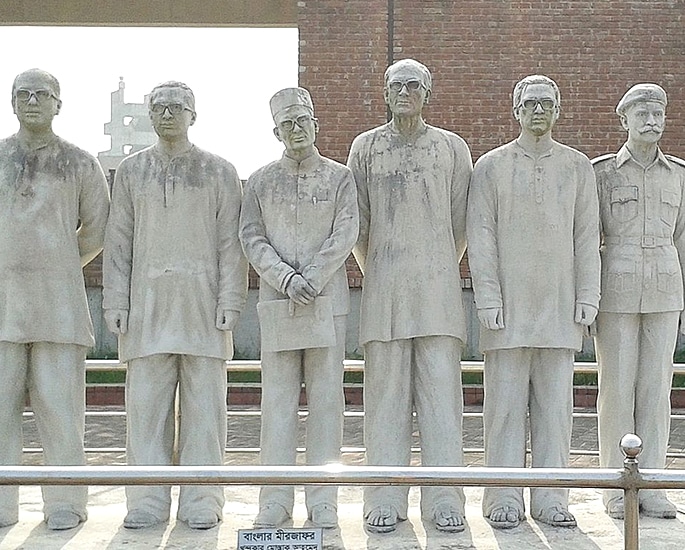 In Mujibnagar, formerly known as Baidyanathtala, there is a memorial complex which covers 20.1 acres to commemorate the historic oath-taking ceremony of the first Bangladesh government.

There are also a number of different sculptures and other monuments which depict different historical events of the Liberation War.

The site was meant to be a tribute to the oath-taking ceremony, however, it also became a National Memorial Complex when Prime Minister Sheikh Hasina visited the site in 1998.

She wanted the history of the war to be preserved for research and for future generations to learn about.

The war lasted nine months but it was extremely brutal and shocking. During a series of attacks by the Pakistan Army, artists were targeted in a strategy aimed at destroying the community’s cultural identity.

Two days prior to the surrender of the West Pakistan forces, over 200 leading intellectuals were arrested and executed. This is one of many sculptures that have been created. 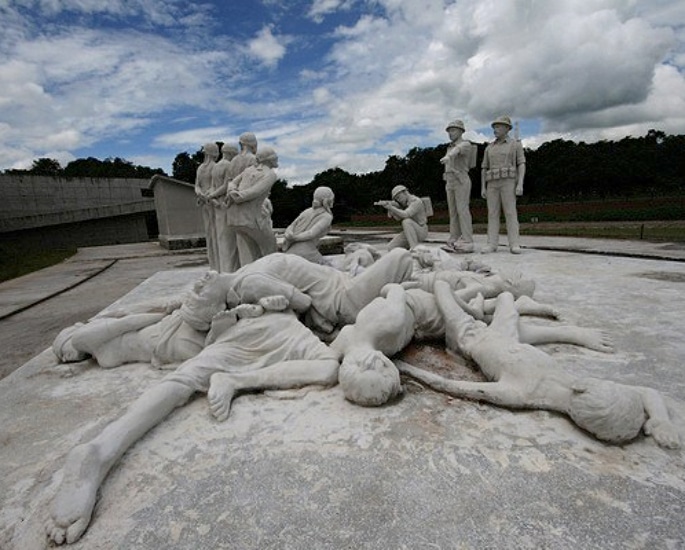 It is just one horrific event that has been recreated to educate those about what happened.

There is a mausoleum in the complex with 23 pillars. They symbolise the 23 years of oppression by the Pakistani rulers. The red square marks the spot where the oath was taken. 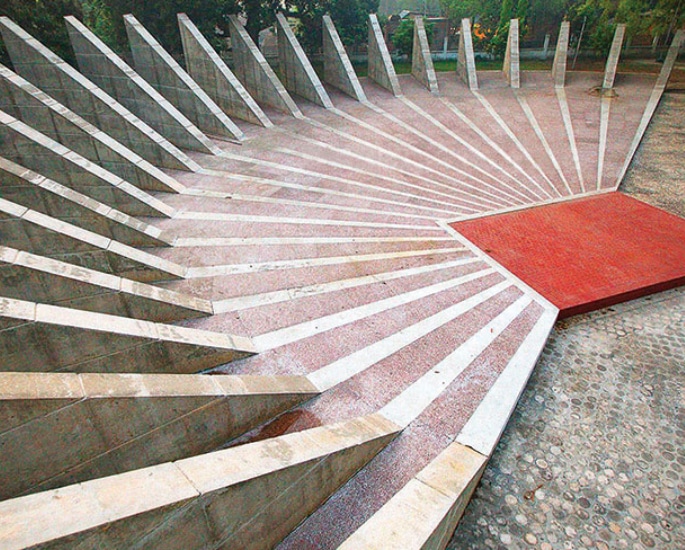 As a collection of sculptures incorporated into one area, they are some of Bangladesh’s most poignant sculptures as they recreate the brutality of war and a historic moment in politics.

These eight sculptures have all been designed and built differently but most of them are in fact a tribute to those who died during the Liberation War.

Many have been created using contemporary art influences and the results are unique pieces which depict various messages to those who visit these sculptures.

The ancient sculptures from different dynasties depict deities which draw influences from each other.

No matter the era, it is these features which make these sculptures some of Bangladesh’s most popular.

Dhiren is a journalism graduate with a passion for gaming, watching films and sports. He also enjoys cooking from time to time. His motto is to “Live life one day at a time.”
Home of Shaheed Bhagat Singh in Pakistan to be Restored
10 Best Urdu Poets whose Poetry you Must Read