Famous and Unique Sculptures of India

Sculptures are a vivid representation of India’s rich heritage and culture, some of which have stood the test of time. We look at some of the most famous.

The tower is made of red sandstone and white marble and stands at 73 metres.

The sculptures of India reflect the rich culture within the country.

It is an art form which has been created using a number of materials.

This is usually in the case of contemporary art.

Many sculptures in India which are made of traditional materials such as stone have potentially been around for many years.

A varied display of India’s heritage is prevalent in these intricate sculptures.

They have taken a lot of work to perfect and have presented incredible durability and strength.

We look at some famous sculptures in India which have become part of Indian architectural history. 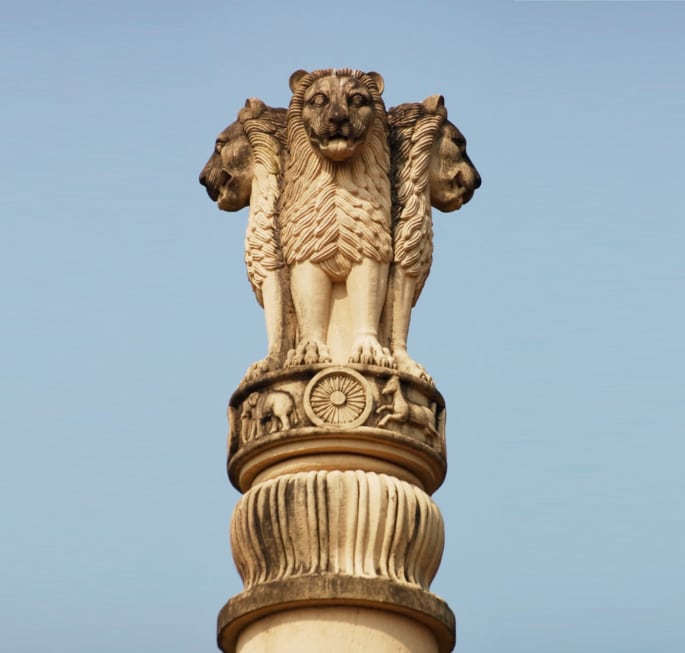 The Ashoka Pillars are a series of columns which are spread across India.

They were constructed by the Mauryan emperor Ashoka when he reigned during the third century.

According to historians, there may have been numerous pillars, however, 19 pillars still stand today.

The pillars have an average height between 40 and 50 feet.

Each pillar was carved from two types of stones. Some made of spotted red and white sandstone and others are buff-coloured hard sandstone with black spots.

Both are located in the northern district of Uttar Pradesh.

The carvings of the pillars are very uniforms, which leads to beliefs that they are all the work of the same craftsmen.

There are theories that the stone was dragged, potentially hundreds of miles to the spot where they were to be built.

The most famous is the Lion Capital of Sarnath which consists of four lions sitting on their hind legs, each facing a different direction.

In 1950, the Lion Capital was adopted as India’s National Emblem.

An image of the Dharma chakra wheel below them is part of the Indian flag.

This specific Ashoka Pillar is very famous in Indian culture as it has helped shaped their history, which includes the national flag. 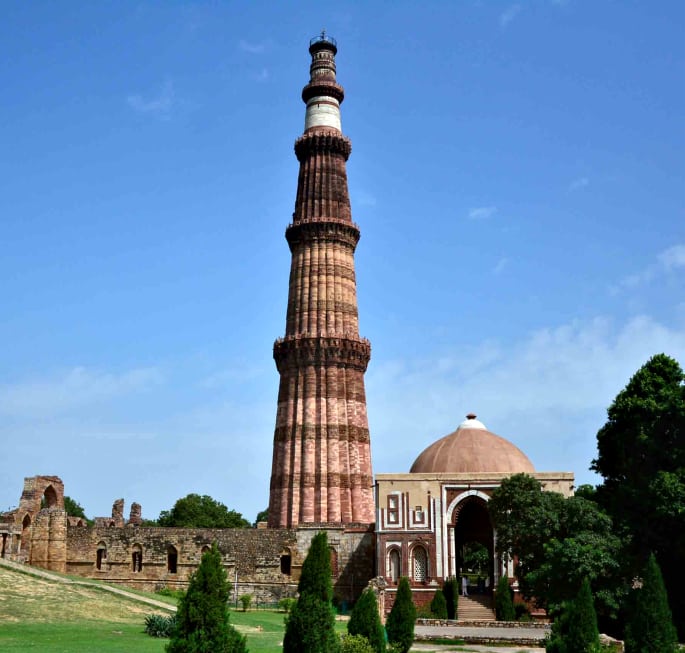 Qutub Minar is located in Delhi and is the highest stone tower in the country.

The UNESCO world heritage site is part of the Qutub complex and is one of the oldest sites in India.

It was completed in 1192 and the design is based on the Minaret of Jam, in western Afghanistan.

The first ruler of the Delhi Sultanate, Qutab-ud-din Aibak is the creator of the tower.

The tower is made of red sandstone and white marble and stands at 73 metres.

It is full of intricate details as the tower is covered with carvings and inscriptions.

Arabic letters and other carvings add to the unique detail of the Qutub Tower.

Detailed carvings can also be seen around the balconies and below that.

The architectural sculpture has been damaged before as a lightning strike destroyed the top storey in 1369.

However, it was fixed and is still standing strong today as many tourists visit it. 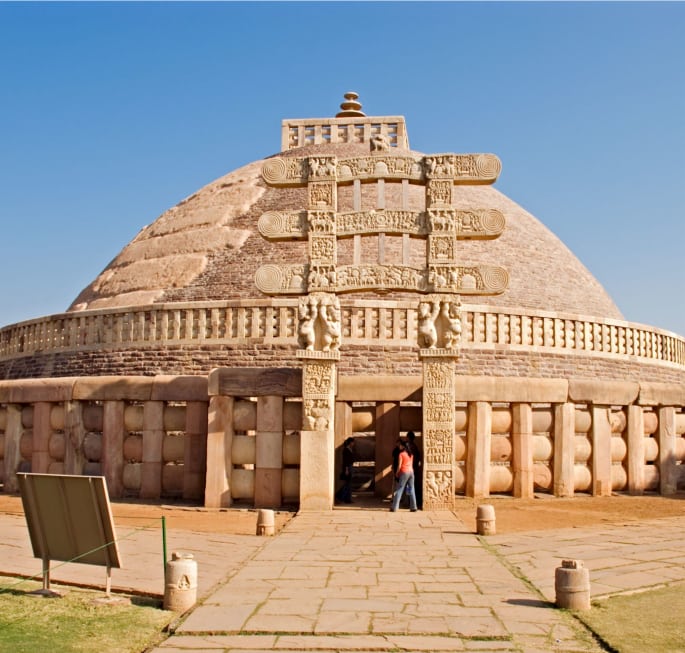 The Great Stupa of Sanchi is the oldest stone structure in India when commissioned during the third century.

It is another creation by Mauryan king Ashoka and is located in the Raisen district of Madhya Pradesh.

The main structure is a hemispherical brick building covered in Buddhist relics.

The carvings are very detailed and add more depth to the structure.

Each carving is beautifully done and has made the site one of the most famous in India.

Along with the main structure, a pillar made of sandstone is built near The Great Stupa.

There are also the remains of an Ashoka pillar nearby. It is rumoured that it was vandalised during King Ashoka’s reign.

Today the site is a major tourist attraction and many people come to see the detailed sculptings covering the brick structure.

It is an established and unique sculpture present in India. 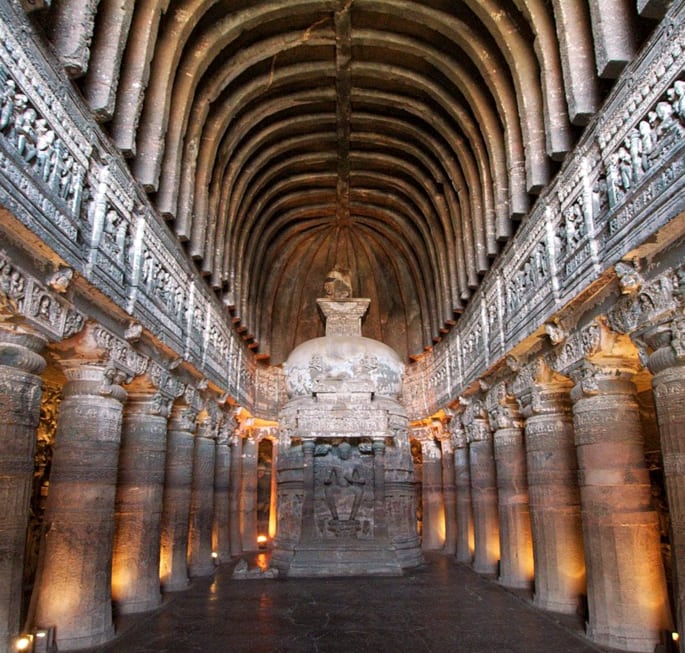 Located in the district of Maharashtra, the Ajanta Caves are a group of about 30 rock-cut caves constructed during the second century.

Inside, there are rock sculptures throughout each of the caves.

The sculptures range from deities to animals, but all are precisely done.

As well as the rock-cut sculptures, cave paintings appear throughout. This has considered it to be some of India’s best surviving art and sculpting creations.

The art in the Ajanta Caves inspired a lot of art seen in India centuries later.

According to UNESCO, the caves were built in two groups. One during the second century and the other between 460 and 480 CE.

Each cave has its own unique styles of sculptures and has varied designs.

Some sculptures are miniatures whereas others are large, more complex pieces.

There have been additions in terms of art as the years have gone by.

Overall, it is difficult to determine the number of sculptures in all 30 caves, but everyone brings it’s own characteristic to the cave.

It is a huge tourist attraction and is a UNESCO World Heritage Site. 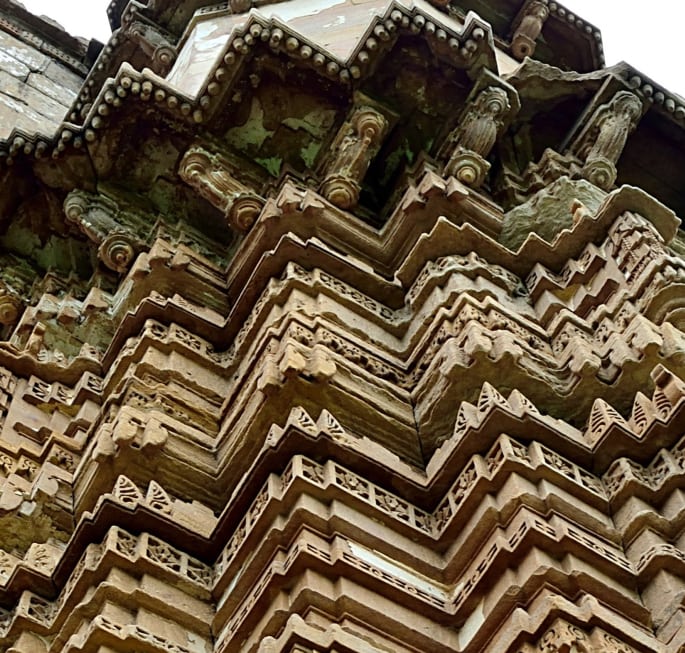 The Jama Masjid is another magnificent piece of stone sculpting which is located in Gujarat state.

This mosque was created in 1513 and combines a number of decorating styles.

The sculpting throughout the mosque is incredibly detailed, especially on the pillars.

A number of artists worked on the complicated carvings shows how much effort went into the grand structure.

This delicate piece of work is a part of the mosque constructed in 1513.

Close up, the appearance creates a unique effect which makes it appear more modern, despite being created hundreds of years ago.

As well as the pillars, it has detailed carvings into the ceiling which creates a layered pattern effect.

The Jama Masjid mosque is part of the Champaner-Pavagadh Archaeological Park which is a UNESCO World Heritage Site.

Restoration has been done but this structure and its sculptings remain unaltered. 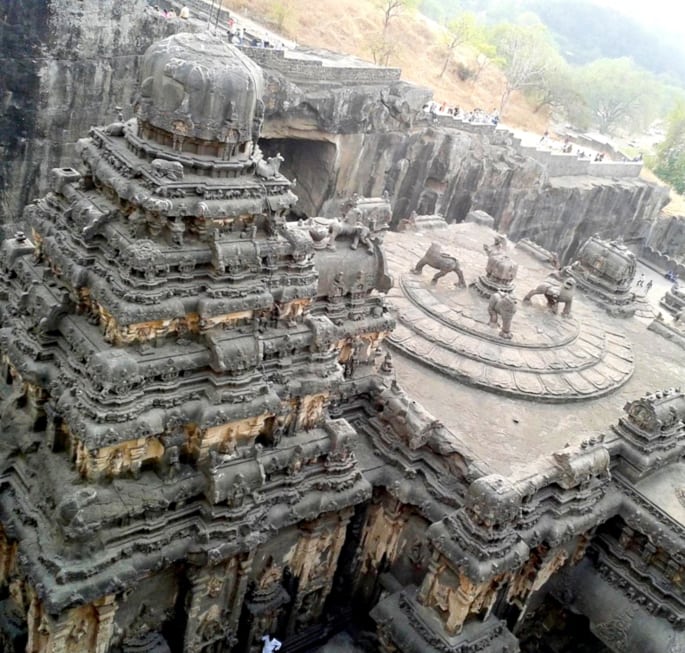 This rock carved set of caves started to be created in the seventh century. Since then, several rock sculptures have been made.

They are located in Maharashtra near the Ajanta caves.

The sets of caves are split into three, reflecting one three periods in time: Buddhist, Hindu and Jain.

Every sculpture in the caves are made of rock and depict a number of things, depending on the sculptor’s inspiration.

One of the largest caves and most impressive sculptures is the Kailash Temple which stands several storeys and is 34 metres tall.

Carved out of a single block of stone, the Kailash Temple is the largest monolithic human-built structure in the world.

It is double the size of The Parthenon in Greece.

The giant sculpture is held by several life-sized sculpted elephants, all from the original rock.

This ancient and unique sculpture is just one part of the Ellora Caves, a UNESCO World Heritage Site.

These sculptures have been made using traditional materials such as rock.

They depict a number of things and have stood strong since they were created centuries ago.

Because of their history and the cultural benefits they bring to India, they have been named world heritage sites.

These famous sculptures are major tourist sites today, making them even more well known to the rest of the world as well as India.

Images courtesy of Must See Places, Wondermondo and Pinterest