Anticipation over Aamir Khan’s PK has peaked. Can Vidhu Vinod Chopra create another blockbuster hit along the lines of 3 Idiots? We chat exclusively to the producer to find out.

"I’m looking forward to people seeing films that we spent 4 or 5 years writing."

The powerhouse team of Vidhu Vinod Chopra, Rajkumar Hirani and Aamir Khan have teamed up once more for PK.

Expectations for this venture are higher than ever, as their previous collaboration, 3 Idiots created history – both at the box office and in people’s hearts.

Can PK match up to its hype and strike a chord with audiences?

PK is the comic story of an innocent man who finds himself in an imbalanced society. Unsure of his surroundings, he questions everyone and everything, with hilarious consequences. 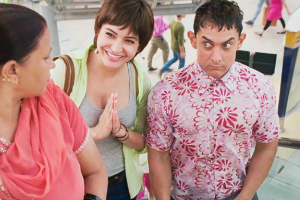 While the legacy of Chopra and his previous films is strong, most of us will be wondering if PK will be just as successful.

In an exclusive Gupshup with DESIblitz, we find out more from the producer Vidhu Vinod Chopra as he chats exclusively to DESIblitz.

How are you feeling about the release of PK?

How do you feel PK is different from all the other films that you have released so far?

“PK is how Lage Raho Munna Bhai was different from 3 Idiots, and vice versa. We don’t believe in doing the same thing again and again for each film just because it worked.

“After 3 years, I didn’t make ‘4 idiots’ I made Ferrari Ki Sawaari, then I made Broken Horses which has nothing to do with Hindi films.”

So what about making different films that have a message?

“That’s a challenge and what makes life wonderful! If you were to have dal chawal everyday just because it’s successful and you get let’s say £100,000, and you eat it for the rest of your life, but you’re making the same thing all your life.

“It’s more of a challenge to do something different. PK and Broken Horses have nothing common. And that’s the fun.”

You developed a formidable relationship with Raj Kumar Hirani. How closely did you work with each other in PK?

“Very closely. Me, Abhijat and Raju are the actual ‘3 Idiots’. We’re constantly in touch with each other and go through the process together. I don’t know where he begins and where I end. However, I never go on the set. I only help in writing and in editing.”

Your wife, Anupama Chopra is a leading Bollywood film critic. Does she lend a hand in the production side of things with you?

“No, she doesn’t at all. She hasn’t seen PK and she’ll see it when everyone else sees it.”

What kind of marketing and distribution strategy have you adopted for the film PK?

At times, you described yourself as ‘someone who is not a likeable and pleasant guy’?

“I speak my mind openly. I don’t say things to people that would please them, I speak the truth even if it’s bitter and can be difficult to take.”

“It’s very easy to become likeable-you can lie and say things the other person wants to hear, but if you say what really is the truth and speak your mind, you’re not liked as much. I think that is the way the world is.”

Finally when will we get to see the next instalment of Munna Bhai? Is it in America or in Delhi?

“We’re writing it at the moment and hopefully we will have a script soon, but its still in the process.”

With Aamir and Anushka both in the lead roles for this comedy film, Vidhu is confident that the film will be a big hit with fans of 3 Idiots and his previous films.

The highly anticipated PK will release in cinemas from Friday 19th December, 2014.

Sonika is a full-time medical student, Bollywood enthusiast and lover of life. Her passions are dancing, travelling, radio presenting, writing, fashion and socialising! “Life isn’t measured by the number of breaths taken but by moments that take our breath away.”
EE ends Orange Wednesdays cinema deal
Sunny Leone dreams of Salman Khan