A 57-year-old Pakistani man from Islamabad got married for the fifth time so that he would not feel “lonely”.

his other daughters decided to find their father a suitable match

A Pakistani man tied the knot for a fifth time so that he would not feel “lonely”.

From his previous four marriages, Shaukat has 10 daughters and one son. He also has 40 grandchildren.

It was reported that it was his daughters who found a wife for him as they wanted to make sure that he does not feel lonely after they married and left the family home.

His marriages came to light after speaking to YouTuber Yasir Shami.

Shaukat explained that his four previous marriages came to an end following the death of his wives.

Eight of his daughters and his son had been married prior to his fifth wedding.

Shaukat said that his two unmarried daughters insisted that he get married one final time and settle down for good.

When arranging his ninth daughter’s marriage, his other daughters decided to find their father a suitable match for him.

They decided for Shaukat to get married on the same day as his daughter so that he does not feel lonely once she leaves the family home to begin a new life with her husband.

When asked about marriage, the 57-year-old Pakistani man said that age is not a big factor, stating that people should be “young from the heart”.

Meanwhile, his fifth wife said she was happy and is getting on with the unusually large family. 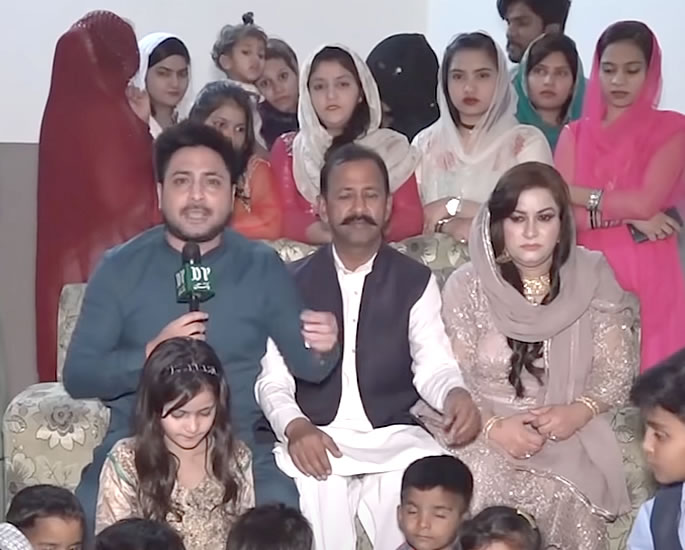 Shaukat also tried to work out how many rotis have to be made just for one meal.

Pakistan has seen a number of unique marriages.

In one previous case, a 55-year-old man married his 18-year-old neighbour after Bollywood songs played a big part in bringing them closer.

Farooq Ahmed lived across the street from teenager Muskan, who is a talented singer.

Farooq soon began visiting Muskan’s home to hear her sing. As time went on, Muskan became attracted to him.

She began hinting that she was attracted to him by repeatedly singing ‘Na Milo Humse Zyada’ from the Bobby Deol film Badal.

During the interview, the couple revealed that Muskan fell for him first. Farooq was also attracted to Muskan.

Farooq continued to visit Muskan and their attraction built up until Muskan asked him out.

The Pakistani man eventually confessed his love for her and the pair went on to have a love marriage.

However, their relatives and friends did not accept their relationship due to their 37-year age gap. Despite the social stigma, the couple remained together.

Farooq said he is blessed to have found Muskan.

Dhiren is a journalism graduate with a passion for gaming, watching films and sports. He also enjoys cooking from time to time. His motto is to “Live life one day at a time.”
10 Organisations to Help You with Energy Bills
Drunk Indian Teacher caught Hiding Beer in Classroom