In a shocking incident, a Pakistani wife exposed her ex-husband after he got married for the fifth time. She revealed that he married a teenager.

Jamal had married multiple women in the past

A Pakistani wife decided to expose her ex-husband after she found out that his fifth wife was a teenager.

The incident took place in the city of Okara on Thursday, July 9, 2020.

The woman, who was the man’s fourth wife, publicly beat him when she found out that he tied the knot with a 13-year-old. She then told the locals what he had done.

The man, known only as Jamal, was in a busy area in the city when he was confronted by his ex-wife Humaira, who he had divorced recently.

It was reported that a lack of action from the authorities prompted her to take matters into her own hands.

She started hitting him. At that point, a crowd gathered to see what was going on.

Out of anger, Humaira then explained his shocking actions. She revealed his previous marriages.

According to the Pakistani wife, Jamal had married multiple women in the past, divorcing each one within a matter of months before tying the knot with the next.

Humaira also showed marriage and divorce documents to the crowd.

She then revealed that he had married for the fifth time, this time to a 13-year-old girl.

Her ex-husband’s vile actions resulted in the crowd siding with Humaira. As she continued to hit Jamal, many supported her actions, praising her courage and dignity.

Humaira had said that the girl was arranged to marry Jamal and that she had no choice.

It is something which is an ongoing problem within Pakistani society. 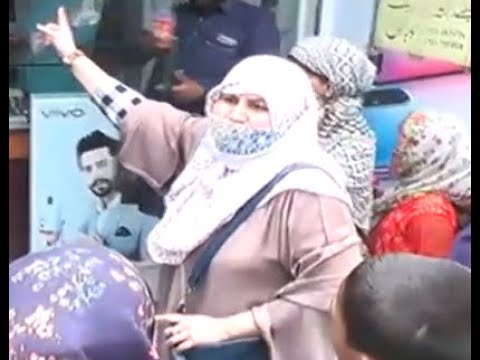 As a result of the Child Marriage Restraint Act 1929, underage marriages are a penal offence.

Even though Jamal committed an illegal act, it is possible that he will walk away without punishment.

If he is punished, he may only be imprisoned for one month or fined.

Despite the laws, child marriage continues to be prevalent in Pakistan.

Marriage may be a sacred part within a person’s life but for some, it is nothing more than a leisure activity. Four marriages are permitted but many ignore the rules.

One rule is that men cannot have multiple wives if they are not treated equally.

Another is that men have to obtain permission from their current wife in order to marry again. However, the rules are ignored.

Dhiren is a journalism graduate with a passion for gaming, watching films and sports. He also enjoys cooking from time to time. His motto is to “Live life one day at a time.”
Dealer threw Class A Drugs in Garden in Police Escape
Indian Sex Racket exploiting Drunk Minor Girls busted