Movie stars from Pakistan have come up trumps as pairs. We showcase 10 incredible onscreen couples in Pakistani films.

“Munawar Zarif and Aasia were my all-time favourite jodi"

In Pakistani films, onscreen couples had become a very popular feature over the years.

Many fans of Pakistani films remember these popular pairs that graced the big screen. These dynamic duos span different decades from the 50s, heading into the new millennium.

Habib-ur-Rehman and Naghma were among the earliest recognised pairs in Pakistani films.

From the late 60s and onwards, many more formidable pairings began to influence the Pakistani film industry.

Some of these prominent duos were also married in real life, elevating their performances and chemistry even more.

We reveal 10 onscreen couples, with a rundown of their best films together. 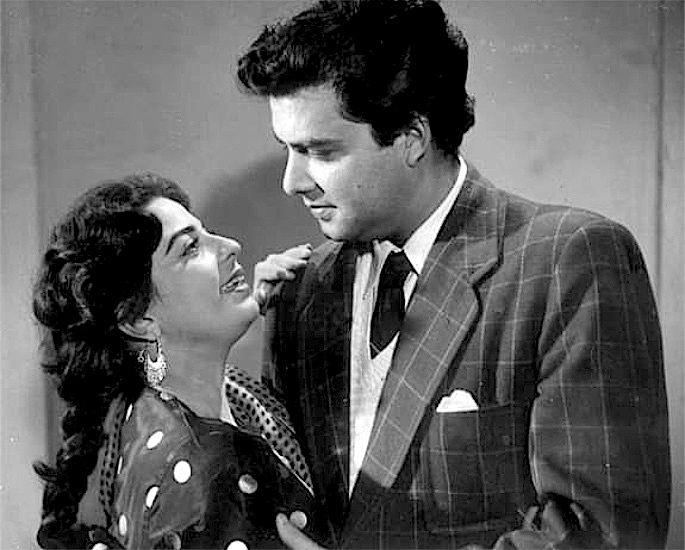 Santosh Kumar and Sabiha Khanum were one of the most immensely loved onscreen couples in Pakistani films.

The two came together in the 50s, building beautiful onscreen chemistry, especially after working together in Qatil (1955).

One of their early films was the black and white social drama, Do Ansoo (1950). This super hit film was the first to achieve the Silver Jubilee feat.

In addition, Mukhra (1958) was another notable film of the pair. This was a super hit Punjabi film, which had a good soundtrack.

Waheeda Ramzan, a retired housewife from Birmingham, exclusively shared her thoughts about this well-liked duo.

“Santosh and Sabiha were a wonderful onscreen combination. I cannot forget their romantic comedy, Saath Lakh, which was superb.”

What made them more special was the fact that the two were real-life husband and wife. 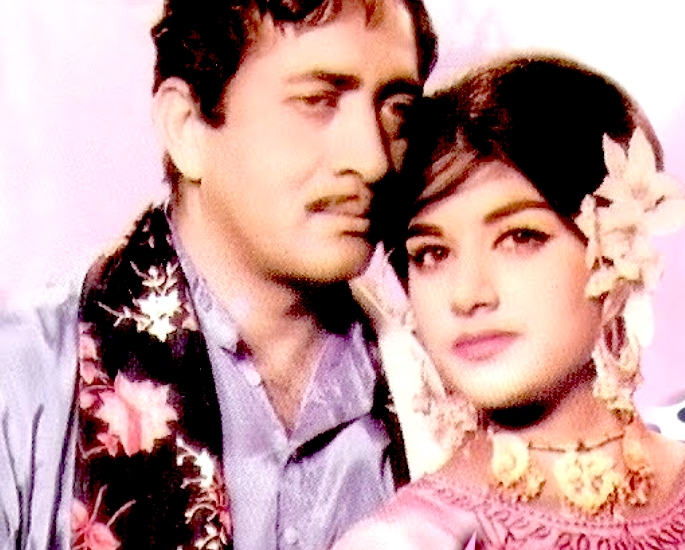 Habib-ur-Rehman and Naghma were one of the most heartwarming pairs in Pakistani films. The two came together in classic Punjabi films

The musical, Babul Da Wehra (1963) was a great social film starring the two. They next played opposite each other in the super hit social film, Mukhra Chann Warga (1969).

Ajmal Rongha, a YouTube user highlights this as a momentous movie for the duo, with a comment underneath the film:

“Naghma aur Habib Ki Yaadgar film.” (This was a memorable film of Naghma and Habib).

Habib as Jamil went on to play the love interest of Naghma in the film Ik Madari (1973). In all the films that the two had starred in together, they had this mesmerising chemistry onscreen.

Habib and Naghma were married in real life but had later divorced. 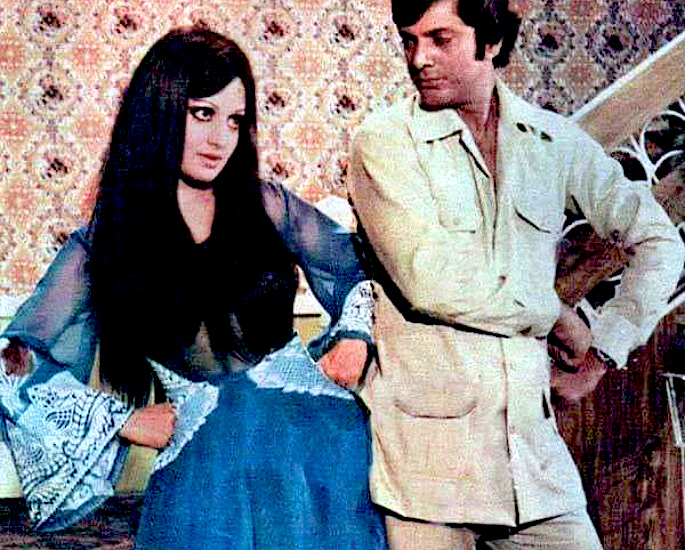 Waheed Murad and Rani were one of the sweetest duos in Pakistani films. The two were a popular pair during the late 60s and 70s.

Their first note-worthy film together was the Golden Jubilee black and white movie, Dewar Bhabi (1967).

They also had the black and white social hit, Khalish (1972). Next came the blockbuster Lucknowi film, Baharon Phool Barsao (1972) where the two played husband and wife onscreen.

The film twice accomplished a Golden Jubilee run. Once while Waheed was alive and then also after he sadly passed away.

The film also had a good soundtrack. The film won four Nigar awards, including ‘Best Film.’

Then came the Platinum Jubilee film, Anjuman (1970). Portraying the title character, Rani as a tawaif (courtesan) delivered a remarkable performance.

Despite being in love with Nawab Asif Ali (Waheed Murad), she meets a tragic end. This film won eight Nigar Awards, including ‘Best Film.’

A fan wrote about the magic of Waheed Murad, along with his perfect combination with Rani in the YouTube comments section underneath the film.

“Waheed Murad is just extremely handsome and beautiful. He has mesmerised the atmosphere in this movie. He is a magician, especially when acting with Rani.

“This pair was the most beautiful pair I have ever seen on the cinema screen in Pakistan.” 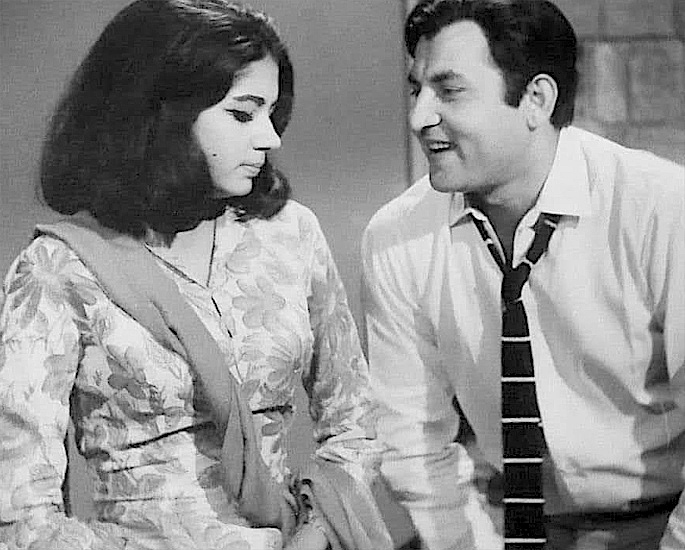 Muhammad Ali and Zeba were one of the most iconic onscreen couples in Pakistani films. They worked jointly in many Pakistani movies.

Their earlier hit films include Afsana Zindagi Ka (1972) and Daman Aur Chingari (1973). The latter was a Golden Jubilee musical.

In the film, Muhammad Ali’s character of Naeem, a lawyer, marries Naila (Zeba), his childhood sweetheart.

The film was declared a super hit. The same year, the pair came in yet another box office hit, Mohabbat Zindagi Hai (1975).

The duo completed a hat-trick of super hit films, with the social movie, Noukar (1975). It seems the pair had certainly a good on-screen presence post marriage in 1966. 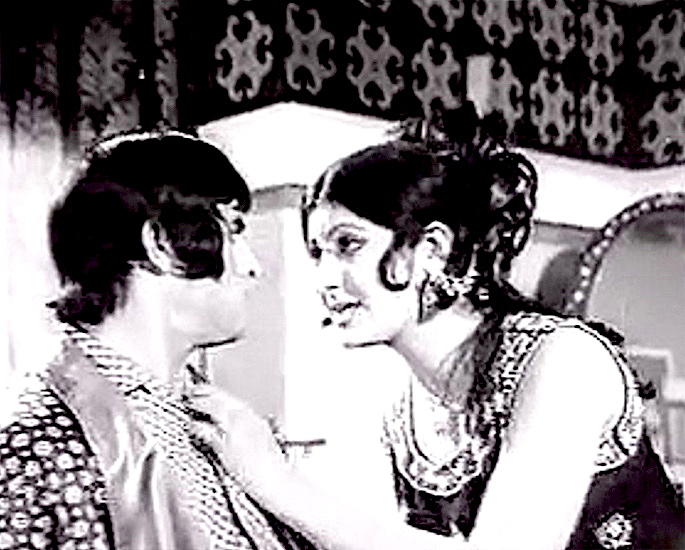 Munawar Zarif was one of the best onscreen pairs in Pakistani films, especially when it came to Punjabi comedy.

The two were spectacularly good in the super hit film, Naukar Wohti Da (1974).

In the film, once Razia (Aasia) hires Munawar (Munawar Zarif) as a husband to please grandad, Khan Bahadur (Agha Talish), all the fun begins.

Tariq Chaudhary, an engineer from Kenya exclusively tells us about his appreciation for this duo:

“Munawar Zarif and Aasia were my all-time favourite jodi of Pakistani cinema. In Naukar Wohti Da they were not only entertaining but deep down very romantic, in typical Punjabi style.

“I can never have enough of their actions and this film. I still watch this movie for the two, whilst having a traditional English breakfast on the weekends.” 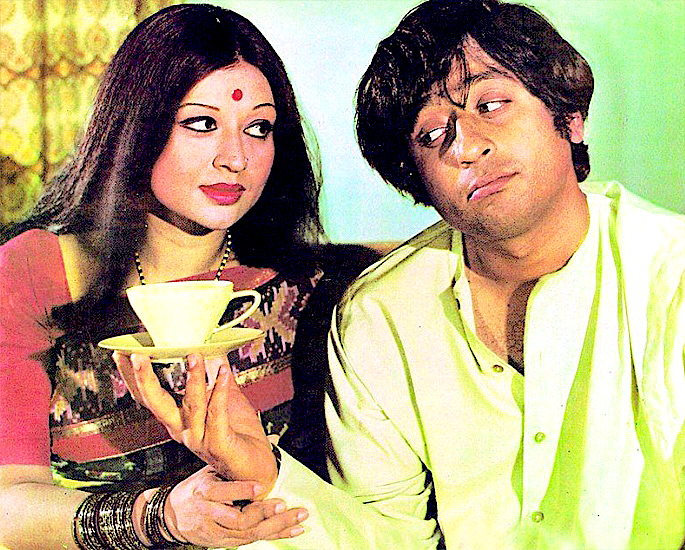 Nadeem and Shabnam were one of the most popular jodis in Pakistani films. They had exceptional success as a film pair.

The romantic-musical Dil Lagi (1974) was the first big film of Nadeem (Raja) and Shabnam (Najma) together, crossing the Platinum Jubilee mark.

Shabnam won a ‘Best Actress’ Nigar Award for this film, which had a tragic climax.

The year 1974 was a fruitful year for the two, delivering memorable performances in hit films such as Bhool and Intezar.

The pair had their second Golden Jubilee, courtesy of the social film Zeenat in 1975.

This year turned out to be quite historical for the duo, with their next two super hit films, enjoying Diamond Jubilee status.

Releasing on the same day, these were Anari and Pehchan. Both stars were outstanding in these two films.

Nadeem was particularly unforgettable as Jano in Pehchan and whilst portraying Anari’s servant, Formo. Thereafter, the pair went from strength to strength with several huge films. 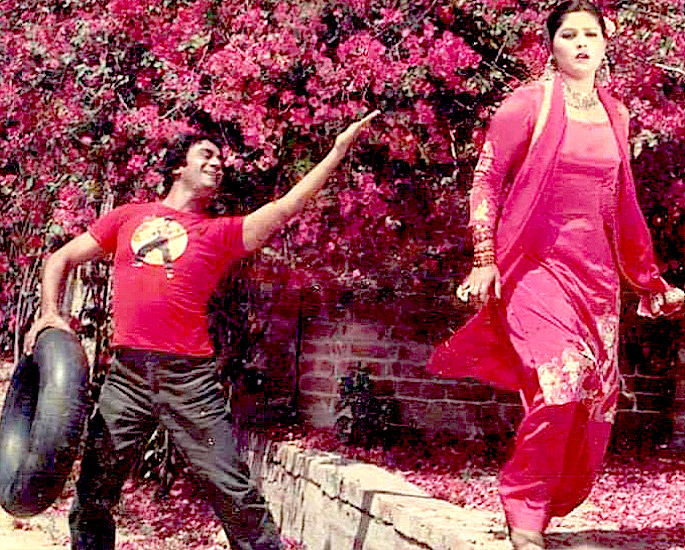 Ail Ejaz and Mumtaz were one of the most amazing onscreen couples in Pakistani films. They had the ideal combination in Punjabi films.

Ali (Asif) and Mumtaz (Zaini) put up a fantastic rom-com performance in Sohray Tey Javai (1980). The two have to hide their marriage from Zainis father who thinks Asif is only a servant.

Ali and Mumtaz were also seen together in the super hit romantic musical film, Saala Sahib (1981).

In this film, Ali’s character of Jameel falls in love and marries Beyna (Mumtaz), despite being engaged to Khursheedi (Nazli) from a young age.

Ali and Mumtaz came in many other films, with the likes of Nanha and Rangeela also featuring in them. 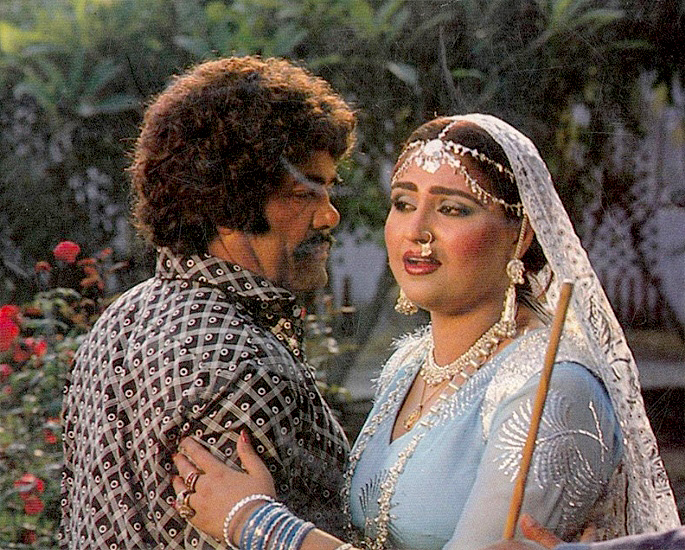 Sultan Rahi and Anjuman were one of the most successful duos in Pakistani films. For more than ten years, the two dominated Punjabi Cinema.

Sher Khan (1981) immediately put the two together in front gear. They looked great in this film as a pair.

This began their conquering of the big screen. In 1981, they had three more box office hits – Chan Varyam, Jeedar and Saala Sahib.

All four films had Diamon Jubilee success, and great songs voiced by none other than the Queen of Melody, Noor Jehan.

Both stars complimented each other. Sultan Saab had the typical Punjabi roar. Whereas Anjuman’s height and physique were very Punjaban like.

The two came in many more hit Punjabi hit films, entertaining audiences into the late 80s and early 90s. 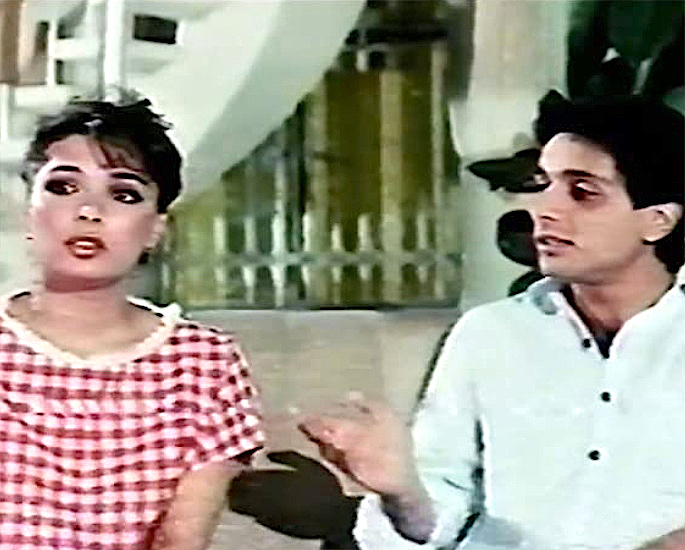 Faisal Rehman and Babra Sharif were one of the super cutest pairs in Pakistani films. The male actor came in some of his best films with his senior Babra.

Their onscreen chemistry was quite evident in movies. The two shared screen space in the super hit film, Tina (1983).

However, most will remember the two when they came together for the Shamim Ara hit, Miss Colombo (1984).

Faisal plays the love interest of Babra in this film made across Sri Lanka. They get very lovey-dovey in the safari-like romantic song, ‘Dekhtay Hi Dekhtay’ by Mehdi Hassan.

Gurvinder Sidhu, a fan from across the border was not shy about expressing his feelings about the two. He posted a comment underneath the song on YouTube:

“My favourite Faisal and Sharif love from India.”

Another fan named, Sumara Samuel reflecting on the pair posted: 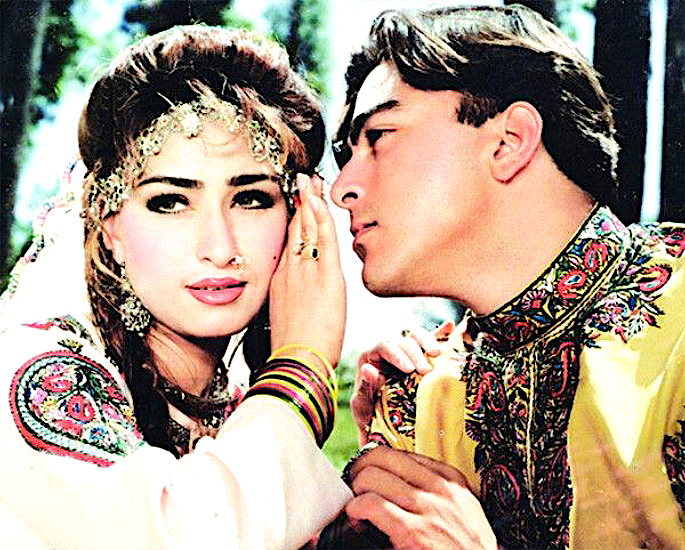 Shaan and Reema were one of the most favourite jodis in Pakistani films. The two had very realistic chemistry onscreen in the films they did together.

The pair made an instant impression in their debut film, Bulandi (1990). However, their greatest film was the romantic, Nikah (1999).

Despite it being a remake of Aaina (1997) it was declared a super hit.

The film depicts the class system, with Shaan (Faraz) coming from a middle-class background, whilst Reema (Bisma) belonging to a wealthy family.

The jodi of Darpan and Nayar Sultana in Pakistani films was also well appreciated by the audience as were many more.

After the Shaan and Reema era, the trend of onscreen couples started to diminish somewhat.

Having said that Fawad Khan and Mahira Khan look fantastically marvellous in the action film, The Legend of Maula Jattt (2022).

Faisal has creative experience in the fusion of media and communication and research which increase awareness of global issues in post-conflict, emerging and democratic societies. His life motto is: "persevere, for success is near..."
Shehnaaz Gill to make her Bollywood Debut with Salman Khan
What Shehnaaz Gill is being Paid for Kabhi Eid Kabhi Diwali?