"She basks in the sun and dips into the blue sea"

During the trip, Nushrat took the opportunity to have some trendy photographs taken of herself at a beautiful beach in Phuket.

Nushrat’s visit to the Southeast Asian country spans over ten days, with four close friends accompanying her. The friends have made it a yearly plan to travel together.

Nushrat is seen enjoying her holiday as she basks in the sun and dips into the blue sea. She certainly looks stunning in a white bikini, which features multi-coloured thread work design on the top.

The two-piece bottom includes subtle embroidery to match the top, while the tassels on either side add a touch of femininity. 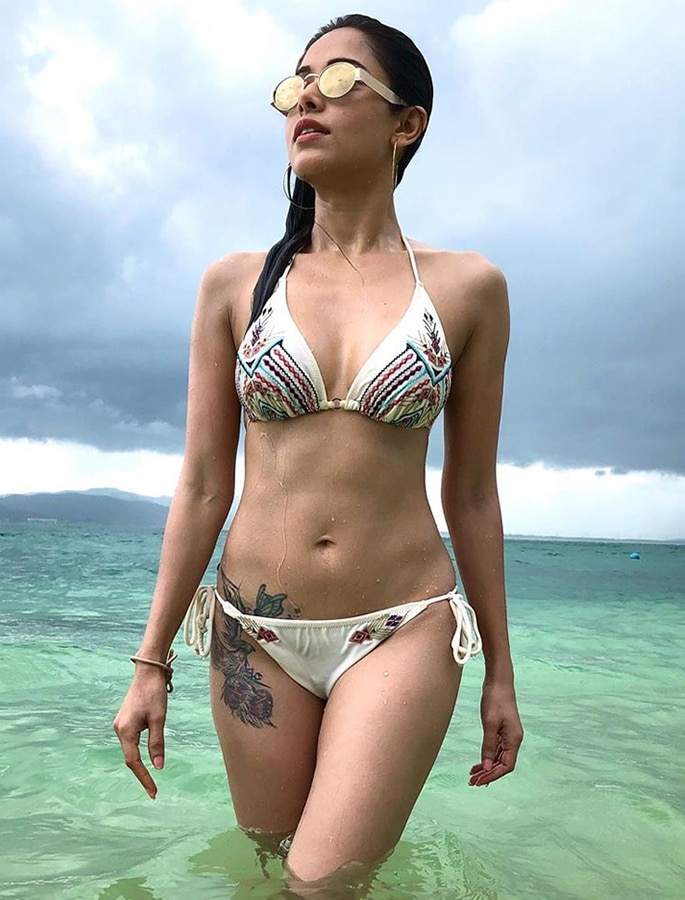 This simple yet stunning bikini allows Nushrat to show her bold and intricate tattoo as well as her toned and sculpted physique.

To complete her look, she is seen donning a pair of round sunglasses with her wavy hair left to fall over her shoulders.

Nushrat is also seen wearing a soft and flowy maxi dress. The green and white ombre effect add a dimension to the otherwise plain dress. 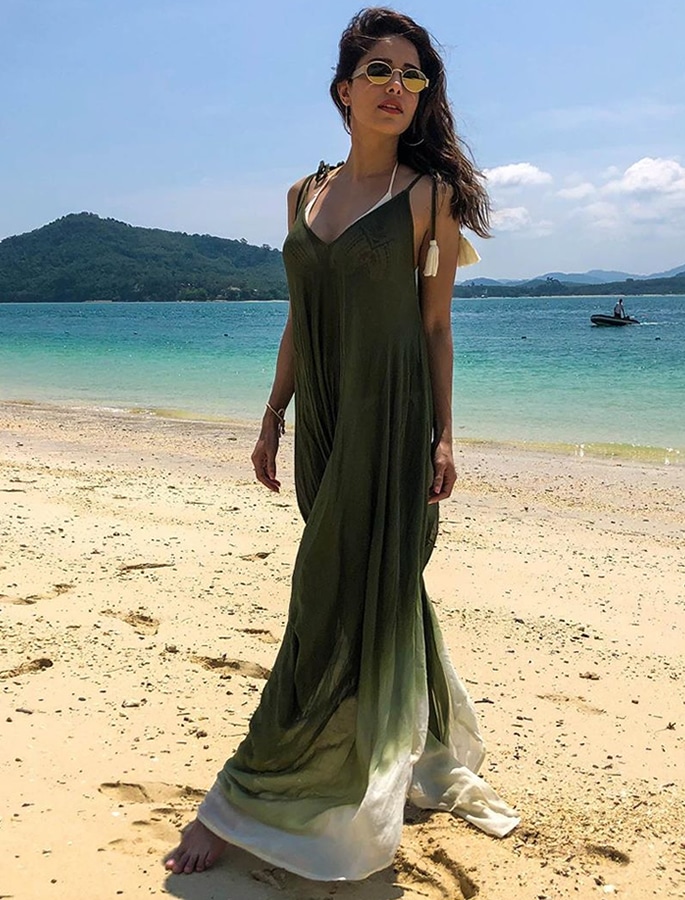 “I explored the islands around Phuket in the first seven days. We stayed at a resort in Coconut Village Island and it was a 20-minute boat ride to the islands.”

Nushrat admits that she does not stick to a schedule. She prefers to enjoy remote places as opposed to regular tourist destinations.

During her time in Phuket, she did dabble in the local cuisine, along with visiting local shops. She went on to reveal what she and her friends do:

“We have been partying every single night. Shrushti, who’s been my best friend for a decade, gets married in November.”

In reply to a question about her most memorable moments during her trip, she states:

“I’m doing crazy things every single night, but I am not going to tell that to anybody.” 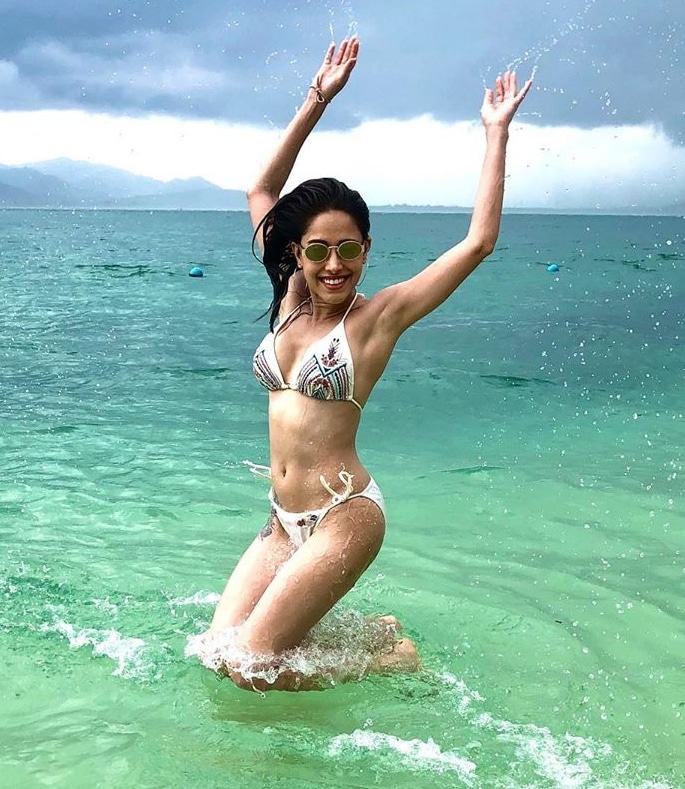 It isi quite evident whatever happens on holiday stays there. Nushrat continued to explain how she has not had much time to sleep:

“The trips are so hectic that I need a week to relax on returning to Mumbai. The days are spent on the beach, riding the waves and indulging in water sports.

“We have dinner at a nice place, then go bar hopping. We get back at 5 am, sleep for two hours, then it’s an early breakfast.”

Nushrat was last seen in Dream Girl (2019) opposite Ayushmann Khurrana.

The story revolves around Karamveer (Ayushmann) who impersonates a female voice and lands a job in a call centre in amusing dreams of men.

He meets Mahi (Nushrat) and falls in love with her. After a series of unfortunate events, Karamveer reveals his identity as call-girl Puja.

Despite the film receiving mixed reviews from critics and audiences, the performance of Nushrat was appreciated. 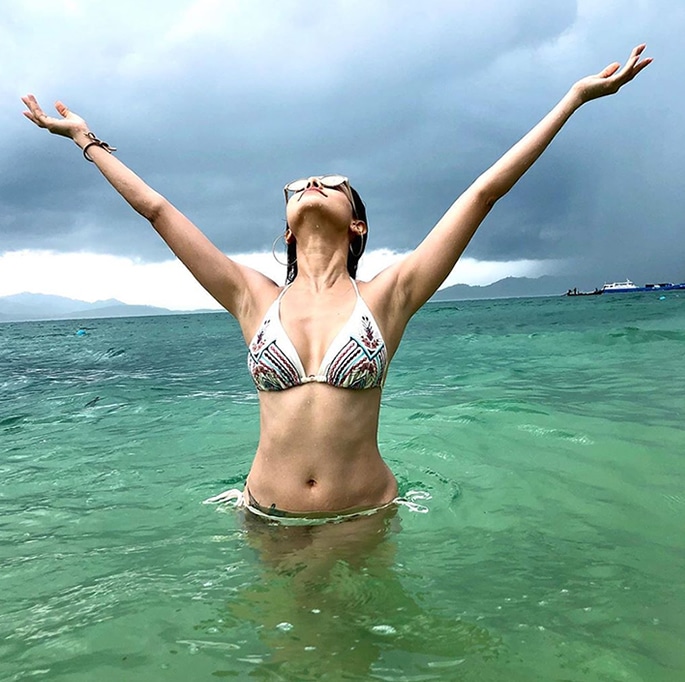 Nushrat is set to star in Hansal Mehta’s Turram Khan (2020) alongside Rajkummar Rao. She updates Mumbai Mirror about her ongoing and future projects:

“We just have a couple of days of patchwork left.”

“Then, there’s a film that would be announced by the year-end. It will start in early 2020. Sorry, I can’t give details right now.”

This Bollywood beauty continues to impress her fans and audiences with her on-screen and off-screen looks. We look forward to seeing Nushrat Bharucha in further films and more beach outfit inspiration from her.

Ayesha is an English graduate with an aesthetic eye. Her fascination lies in sports, fashion and beauty. Also, she does not shy away from controversial subjects. Her motto is: “no two days are the same, that is what makes life worth living.”
Rakul Preet stuns in Gorgeous Red Luxurious Gown
Best Dressed Pakistani Stars at Hum Awards 2019