Shahid Kapoor’s wife Mira Rajput has shown off her acting skills in a beauty advert for Olay. Now people want to know when she will be on the silver screen.

Mira uses this ad as a platform to talk about parenthood

Shahid Kapoor’s wife Mira Rajput Kapoor has recently made her acting debut in a beauty advert.

On 8th August 2018 she posted an ad for Olay’s new anti-ageing cream on her Instagram account with the caption:

“Being a mother doesn’t mean you stop being yourself right?”

The video initially received some negative backlash as trolls thought the 23-year-old was too young to be using and endorsing anti-ageing cream.

Despite this, Mira uses this ad as a platform to talk about parenthood and also promote self-care.

Being a mother doesn’t mean you stop being yourself right? I took the #Olay #SkinTransformation #28Daychallenge Here’s my #Reborn story.. what’s yours? @olayindia

Mira also encloses that she chooses to use Olay because the anti-ageing cream helps her attain glowing skin.

She talks about how she lost her natural glow after giving birth to her first child Misha in 2016.

In the video, she shares: “I still remember holding Misha in my arms for the first time. It was magical. It brought Shahid and me even closer.

“I’ve always been a very hands-on mom. So you tend to forget yourself as a woman.”

In the video, Mira stated: “Shahid noticed the change and he was like, ‘what’s your secret?’”

Shahid Kapoor is very supportive of her acting endeavours and even left a comment on her video saying: “Who’s that stunner.”

It seems Rajput has an interested in working in ads as she has previously worked on commercial projects.

Rajput shot a commercial in July 2018 advertising a baby product.

On the sets of this shoot, she was described to be professional and meticulous. A report from Times Now quoted a source saying:

“She worked like a thorough professional and got it right in one take; in fact, no one could believe that this was her first commercial.

“She is very camera friendly and performed with great dignity and confidence.” 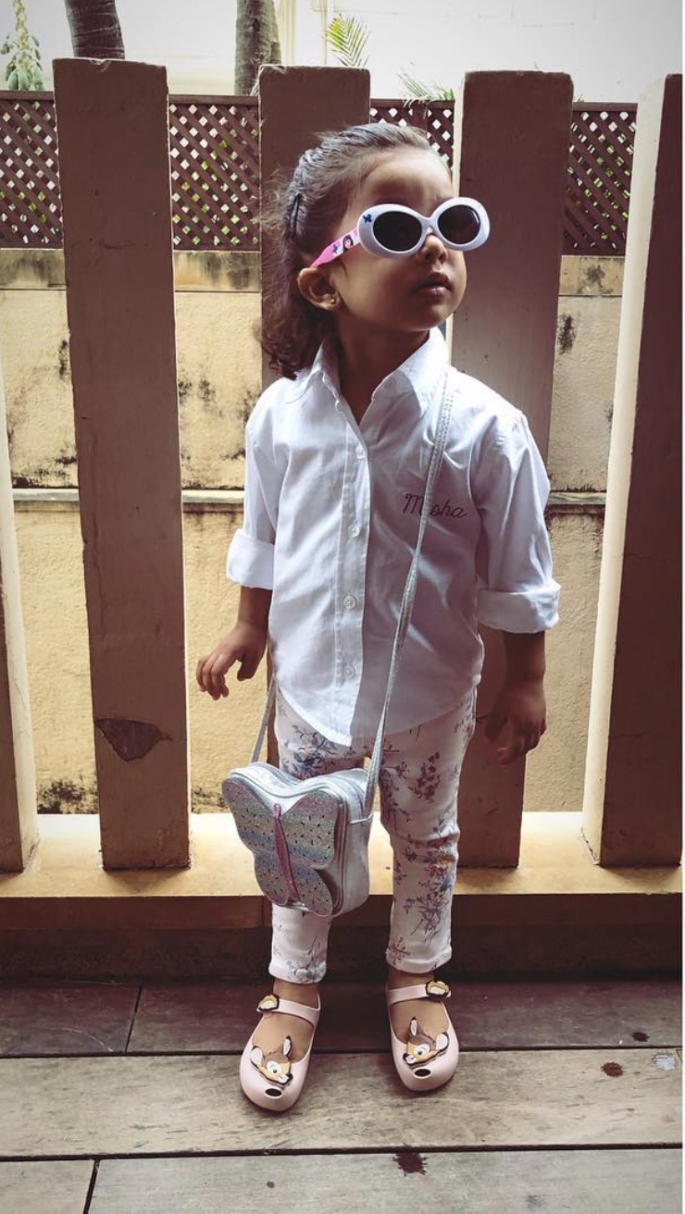 It has been rumoured that they will be making a commercial for this company soon but nothing has been finalised yet.

Before Mira started to work on independent ads, the media mostly photographed and spotted her with her husband.

The couple made their first appearance on Koffee with Karan hosted by Karan Johar.

On this show, the couple spoke a lot about their arranged marriage, love and becoming parents.

They are often seen together on red carpet events, celebrity weddings and movie premiers after tying the knot in 2015 in Delhi.

Since their marriage, Mira and Shahid Kapoor have prioritised starting a family.

Shahid Kapoor has always been supportive of Mira Rajput and states that he will encourage Mira in the field that she wants to pursue.

In a recent interview Shahid shared:

“Mira, who is just 22, would prefer to have a second kid soon as well. She wants to flip the norm, get the kids to a certain age and then be free to do what she likes.”

Regardless of what Mira Rajput decides to do, many Bollywood fans are keen to see them both on the silver screen because they have been couple goals since 2015.

Aishwarya was going to play Rani Padmavati and Not Deepika?
Preity Zinta ready to Make her Bollywood Comeback