It’s a Baby Girl! For Shahid Kapoor and Mira Rajput

"It was a normal delivery. Both mother and child are doing fine."

Wonderful news for Shahid Kapoor and Mira Rajput who have become proud parents of a baby girl.

The baby was born on Friday 26th August 2016 at about 8.00pm weighing 2.8kg at the Hinduja Healthcare Surgical hospital in Khar, a suburb of Mumbai in India.

Mira was taken to hospital after having labour pains on the Friday and Shahid accompanied her throughout to welcome their first child.

Dr.Kiran Coelho, the gynaecologist who performed the delivery told the Hindustan Times: “It was a normal delivery. Both mother and child are doing fine.”

An ecstatic father, Shahid Kapoor took to Social Media and Twitter to share the joyous news with the world:

She has arrived and words fall short to express our happiness. Thank you for all your wishes.

Shahid revealed he was going to be a dad during the launch of the trailer of Udta Punjab and Mira was seen at Lakme Fashion Week in April with her baby bump. Recently, Shahid shared a photo of himself and a glowing mother-to-be Mira on Instagram: 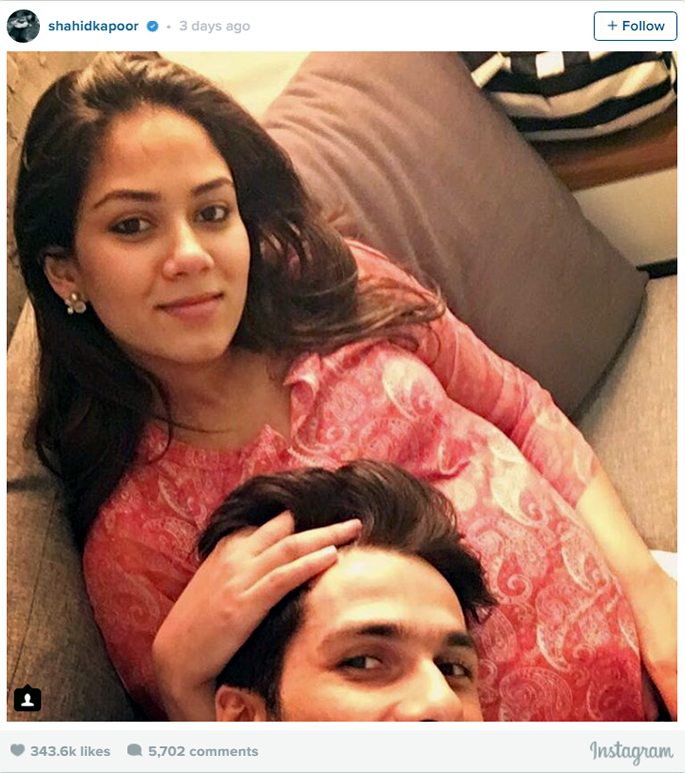 Upon the baby news breaking, Shahid’s parents went to visit the new generation of their family at hospital. Pankaj Kapur, a staunch actor in his own right, and his wife, the proud grandparents, were spotted on their visit. Pankaj Kapoor was recently featured at the London Indian Film Festival 2016 for his film Toba Tek Singh.

The Bollywood fraternity reacted to Shahid’s baby news with a gush of Tweets from fellow actors and directors.

Congratulationssssssss to the most amazing couple @shahidkapoor @MiraRajput !!!!! Can't wait to see this beautiful baby girl!!!!????????

Huge congratulations to @shahidkapoor and Mira….nothing more precious than a baby girl….lots of love….

The next anticipated news will be what they will call their new bundle of joy. No doubt speculation will start of suggested names.

After previously meeting at satsang of their religious group, Shahid and Mira were married at a private ceremony in July 2015. They recently celebrated their first wedding anniversary and now are a proud mum and dad to their new baby girl.

DESIblitz wishes the new parents and baby all the very best.