A married couple from Birmingham have been found guilty of killing their brother-in-law, a popular shopkeeper known as ‘Zammy’.

allegations and insults had been exchanged between the couples

Mobeen Shahzad, aged 28, and Sheridan Fitzsimmons, aged 29, of Birmingham, have been convicted of killing a shopkeeper who was also their brother-in-law.

It was heard that on November 17, 2019, Mazammal Butt sustained a fatal stab wound in the car park at the back of his butchers shop in Lozells Road.

Popularly known as ‘Zammy‘, the shopkeeper collapsed and was pronounced dead before arriving at the hospital.

Moments before the stabbing, Shahzad and his wife Fitzsimmons were arguing with Mr Butt’s wife, who claimed Fitzsimmons ordered her husband to “finish” and “kill” Mr Butt, something she denied.

The pair then went out of view.

Moments later, Shahzad returned and told his sister that he had killed her husband in the street.

Fitzsimmons fled in the couple’s Audi while Shahzad walked home.

Shahzad was arrested an hour later on Alum Rock Road. Officers searched the car and found a knife.

He claimed Mr Butt had brought the knife to the scene but he wrestled it from his grasp.

He admitted that he was still holding it and must have inflicted the fatal blow to his relative in the “little tussle” between them.

However, Shahzad claimed he could not remember doing so and that it must have been an accident.

Fitzsimmons was initially treated as a witness but on November 18, she was arrested on suspicion of murder.

It was revealed that after her husband’s arrest, Fitzsimmons Googled how long a life sentence is.

It was also heard that she had sent Shahzad a message before the killing advising him to delete previous chats as they could be “evidence of hurting Zammy”. 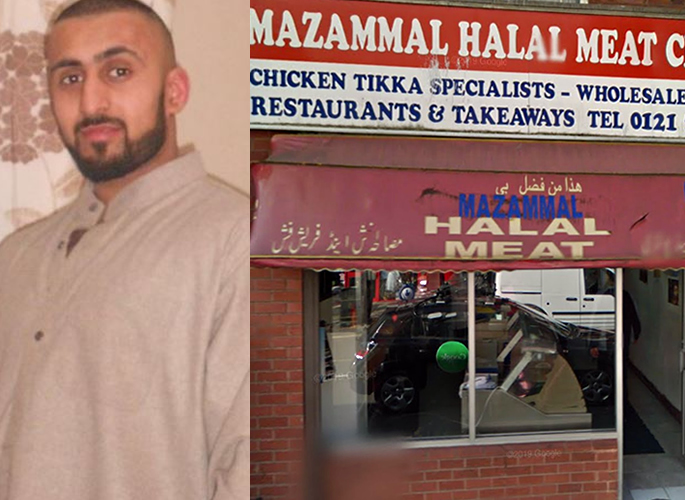 Leading up to the incident, allegations and insults had been exchanged between the couples and it had caused “all hell to break loose” within the family.

It was also the culmination of tensions which had been going on for months.

One major bone of contention, particularly with Fitzsimmons, was the fact Mr Butt and his wife lived in the flat above Mazammal Halal Meats, run by Shahzad, with their rent and bills covered by income from the family business.

In July 2019, police were called to a family fight in the premises, supposedly over Mr Butt’s standards of work.

However, it escalated in November 2019.

Fitzsimmons made an allegation about the shopkeeper which sparked a confrontation between the couples in the shop on November 16, 2019.

She threw a mop at Mr Butt and called him a “b*****d”. Mrs Mazammal returned the insult but extended it to Fitzsimmons, Shahzad and their children.

Following a six-week trial, Shahzad was found guilty of murder.

Fitzsimmons was convicted of manslaughter.

“My thoughts are with Zammy’s family.

“I hope now they can find some comfort knowing that the pair responsible for his death have been brought to justice.”

Birmingham Mail reported that they will be sentenced on March 12, 2021.

Dhiren is a journalism graduate with a passion for gaming, watching films and sports. He also enjoys cooking from time to time. His motto is to “Live life one day at a time.”
Two Indian Climbers banned for faking Everest Summit
Indian Man arrested for Sexually Assaulting Relative aged 10