Man jailed after Stalking and Staring at Bank Worker Daily

A man has been imprisoned for stalking and staring at a bank worker on a daily basis. The victim worked at Halifax in Derby city centre.

"He looked at her until she made eye contact. It made her feel uncomfortable."

Manpreet Butoy, aged 31, of no fixed address, was jailed for 12 weeks for stalking a bank worker. He also stared through the window of her workplace on a daily basis.

The woman, who worked at the Halifax branch on East Street, Derby, felt “stressed and uncomfortable” by Butoy looking through the glass and smiling at her.

He also approached her while she was waiting at a bus stop at the Spot where Butoy asked her if she had a boyfriend.

Southern Derbyshire Magistrates’ Court heard he punched a security guard in the chest.

“The victim works at the Halifax bank, dealing with customers. She saw the defendant staring in at her whilst she was working. This started during June of this year.

“He started to stand outside the branch staring into the store on a daily basis.

“He was smiling at her. He looked at her until she made eye contact. It made her feel uncomfortable.”

On July 17, the woman finished work and went into town before walking to the bus stop.

She saw Butoy walking towards Osmaston Road and he approached her.

Mr Church added: “He said that she worked at the Halifax bank and asked her if she had a boyfriend.

“She asked him why he was asking her and it was making her feel uncomfortable. The defendant didn’t respond.”

Another woman at the bus stop then started talking to the victim to give the impression they were together.

Mr Church later explained that on July 18, he punched a security guard inside the court building. He said:

“The defendant entered the court and started to put his belongings in the trays as told by the security officers.

“He was described as being quite hostile, slamming open the door to the court.

“He landed a punch to the right side of the security guard’s ribs. He was told to leave court, which he did.”

The court heard he has had 42 previous convictions. 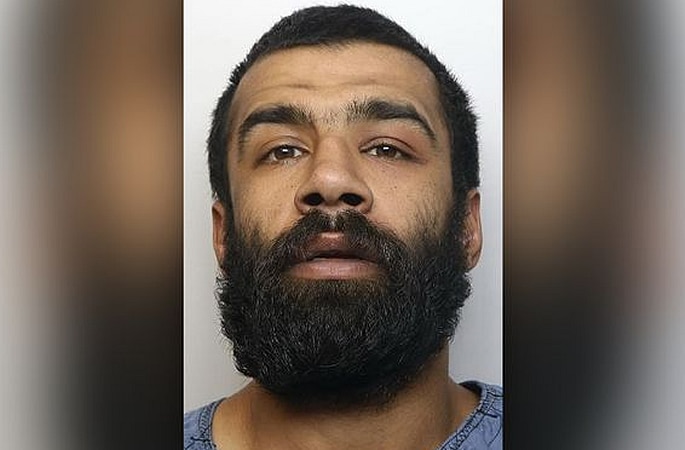 He told one female officer she was a “scummy English cow” and told another officer “I can’t stand you, you smell of pork”.

The prosecutor, Peter Bettany, explained that Butoy was spotted with other people in an area known to be associated with where other drug users meet.

The officers searched him and found what appeared to be a wrap of drugs. Butoy then racially abused them.

He was arrested and when questioned, he denied any wrongdoing, telling them “I am not a racist boy” and told officers he was “not being threatening towards them”.

Mr Bettany pointed out that Butoy had committed a racially-aggravated offence in the past. He was jailed for 20 weeks.

In relation to the stalking offence, Butoy had no defence solicitor in court and was asked if he wanted to directly address the magistrate bench.

He said: “I didn’t know this woman.

“Obviously I can only accept what has been said. I didn’t know that I was causing an inconvenience.

The Derby Telegraph reported that he was also given a restraining order until further notice. Butoy had to pay £100 in compensation to each of his two victims.

Dhiren is a journalism graduate with a passion for gaming, watching films and sports. He also enjoys cooking from time to time. His motto is to “Live life one day at a time.”
Drunk and ‘Naked’ Indian Teacher exposed by Villagers
Tesco Cashier Stole from Tills to Pay Debts in India and UK