Mallika Sherawat is known for turning heads wherever she goes, and the 67th Cannes International Film Festival was no exception. We have all the news of this Indian beauty as she enjoy the South of France at Cannes.

Mallika has previously made headlines regarding her bold and risqué red carpet outfits.

Mallika Sherawat who has found a new home in America, has truly rocked Cannes this year, making her fifth appearance at the coveted festival. Arriving for the opening day, she oozed Indian glamour at the Cannes International Film Festival representing the best of Bollywood.

The sensuous Bollywood star Mallika Sherawat is ready to add another feather in her successful career, having inaugurated the Confederation of Indian Industry (CII) Pavilion at the Cannes 2014 on May 16.

Representing CII, Mallika tweeted out: “At the CII inauguration with Ashok Amritraj and Indian Ambassador to France.” 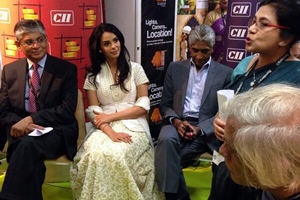 “Feeling honoured to be invited to inaugurate the CII Pavilion at the Cannes Film Festival 2014,” she added.

The Bollywood star was joined by speaker Arun Kumar Singh, who is the Indian Ambassador to France as well as Ashok Amritraj, who is the Hollywood producer and chairman of the CII Cannes Initiative. The Indian delegation was led by film veteran, Kamal Hassan.

The pavilion will run during the course of Cannes and is a great opportunity for producers and film makers from different countries to network with each other, allowing India to connect with the likes of New Zealand, Australia and Germany and collaborate future projects. 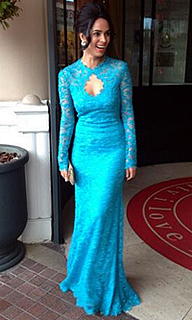 One spokesperson for the FICCI (Federation of Indian Chambers of Commerce and Industry) said: “This new initiative is aimed at promoting and forging ties for co-production and partnerships between India and these countries.”

By making it easy for global opportunities, the CII is aiming to get the highest level of business for the Indian Media and Entertainment industry by involving Indian state governments, film makers and services experts to be a part of the booth space.

Mallika was also seen taking part in the inaugural session and discussion for the ‘Indian Cinema, Opportunities and Synergies with Global Cinema’.

Bimal Julka, Secretary for Information and Broadcasting added: “It would be now possible for filmmakers of different countries to come together and make films under bilateral co-production agreements. Bringing different nationalities together, these arrangements would also forge new markets and wider audiences.”

Mallika also made her first red carpet appearance for Cannnes 2014 for the opening night screening of Nicole Kidman’s Grace of Monaco.

Mallika arrived in a light blue Emilio Pucci lace gown with diamond earrings. No stranger to prying media eyes, Mallika has previously made headlines regarding her bold and risqué red carpet outfits. 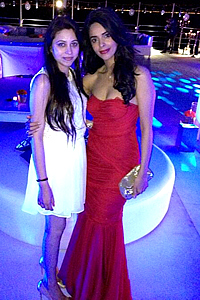 This year however she put all the controversy behind her and went for a more subtle look for the 67th Cannes Film Festival. To go with the demure outfit she was seen in, she went with a simple but elegant up do along with jewellery by Boucheron.

The Indian party saw Mallika team up with her Bollywood pals and she opted from an orange blazer and black trousers and boots. She was joined by Jackky Bhagnani.

Mallika is not the only Bollywood celeb to have graced the red carpet at Cannes this year. The likes of Sonam Kapoor, Uday Chopra and Aishwarya Rai Bachchan have also attended.

It is Uday’s Cannes debut as he joined Mallika for the screening of Grace of Monaco, which is partly produced by Yash Raj Films Entertainment. 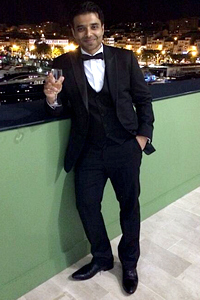 Indian beauty, Freida Pinto also walked the red carpet for the screening of Saint-Laurent in a nude colour Michel Kors gown which saw the full skirt decorated with matching feathers and glittering sequins.

The day after, the brand ambassador for L’Oreal Paris arrived at the screening of The Houseman in a coral Oscar de la Renta gown with gold detailing.

Sonam Kapoor who has always been a fashion favourite opted for a stunning black Elie Saab gown for The Houseman screening, looking every inch a classic Bollywood diva, complete with red lips.

It is clear that Bollywood is getting closer and closer to mainstream cinema and with our favourite stars rubbing shoulders with Hollywood, we could be looking at more collaborations in the future.

Mallika Sherawat is soaring into her fifth year at the Cannes Film Festival and is currently shooting for the hit series on CBS’s Hawaii Five-O. With Mallika progressing in America, this may be a chance to see her and many other stars appear in Hollywood more than once in the near future.

Nadeera is a model/dancer hoping to take her talents further in life. She likes to carry her dance talent in charity functions and is passionate about writing and presenting. Her life motto is: "Live life over the top!"
Aishwarya Rai on Cannes 2014 Red Carpet
Rajinikanth and Deepika Padukone in Kochadaiiyaan