Rajinikanth and Deepika Padukone in Kochadaiiyaan

"This is not an actor’s show. It is a technician’s show. It’s a visual feast actually."

The movie stars the well-known superstar Rajinikanth who is a living legend of South Indian cinema.

The movie idea concept is conceived and directed by Rajinikanth’s daughter, Soundarya Rajinikanth Ashwin, who is making her big directorial debut on a grand 3D scale. 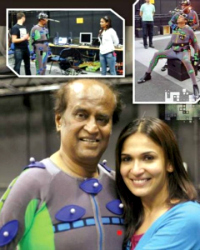 A period film, Kochadaiiyaan is written by K.S Ravikumar. The film has been shot with animation techniques and some portions are also captured in 3D.

This movie is a labour of intense behind the scenes hard work from various units in both post and pre-production. Since the film was shot using performance capture technology, 48 cameras were used to shoot each and every scene.

Anushka Shetty was initially approached for the lead but it was confirmed later that she was not part of the movie. Asin Thottumkal and Vidya Balan were also rumored to be considered for the role. 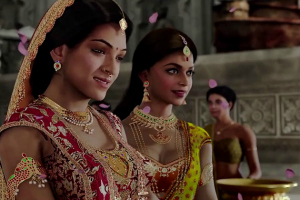 Katrina Kaif was approached for the role too and was in discussion with the team. However, dates were considered an issue. Deepika took up the offer in 2012. This will be her first Tamil debut.

Many of Deepika’s successful movies in the past have been offered to other actress prior to being offered to her. However, she is a true artist as she takes the work for her love of art and does not let her ego get in the way.

This has led her to deliver successful hits and the audiences have accepted and appreciated her talent. It is said that she was paid a salary of Rs 3 crore for two days of filming.

To suit the mass appeal of viewers, the film originally in Telugu will also be dubbed in Tamil, Hindi, Punjabi, Bhojpuri, Marathi and English. 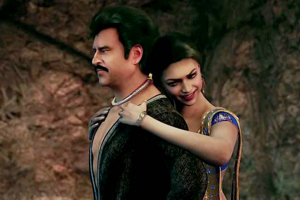 Rajinikanth added: “I am very proud and shocked to see my daughter directing. I was very uncomfortable in the beginning and later I forgot she is my daughter and I could only see the director.

“This is an experience for me. This is not an actor’s show. It is a technician’s show. More visual effects. It’s a visual feast actually.”

Fans can look forward to an enthralling fight scene between the two leads, where Deepika took to the intense physical challenge – is considered to be one of the highlights of the film: “It was great fun. We’re sure it will be a highlight in the film,” Soundarya says.

60 concept artists have been reported to be working for the film. Established fashion designer Neeta Lulla has worked on the look of the characters in the film. 150 costumes per character were designed on paper, and only 25 were chosen for Rajinikanth’s character: “We created the looks not in fabric form but a detailed overview in sketch form. My creative team and I worked on for almost eight months on the various characterisations,” Neeta says. 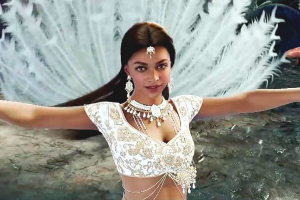 With the superstar having turned 63, making Rajinikanth appear a young man on screen was a delicate task. Soundarya adds: “We scanned his [Rajinikanth’s] face and made a 3D model to get the exact precision of his features, such as the scar on his nose. And then we corrected the 3D model by tightening his skin to make him look 25 years younger.”

The movie trailer gained almost 1 million YouTube hits within the first day of release. Keeping that in mind, it is not a surprise that the predictions for the movie are ranging from 25.5 Crore for the opening day itself.

The film will also have special screenings abroad in London and Los Angeles. Keeping up with the trend of using merchandising for publicity and money, the producers have struck a deal with Karbonn Mobiles to market images and screen savers with added extras including autographs of the lead actors on the back cover of the phones. 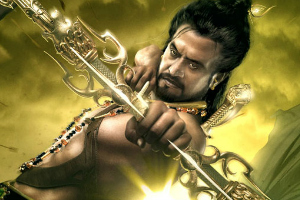 The movie release date has been changed a few times. Reports suggested that Soundarya was under financial trouble. However, makers have insisted that the delay has been due to technical reasons, and the time-consuming rendering of 3D versions of the film to accommodate the increased number if showings.

The high number of advanced bookings have indicated an increased demand for the film, and 2,000 extra screens have been secured internationally to make a total of 6,000.

The film is touted to be in par with Hollywood movies like James Cameron’s Avatar (2009), and The Adventures of Tintin (2011). With such a huge comparison to look forward too and the relentless effort put in by the team, we look forward to seeing this movie gain its due credit for everyone’s hard work. Kochadaiiyaan releases worldwide from May 23.

After a short stunt on stage, Archana decided to spend some quality time with her family. Creativity accompanied with an aptitude to connect to others got her to write. Her self motto is: “Humour, humanity and love is what we all need.”
Mallika Sherawat rocks Cannes 2014
Tiger Shroff makes Bollywood debut with Heropanti